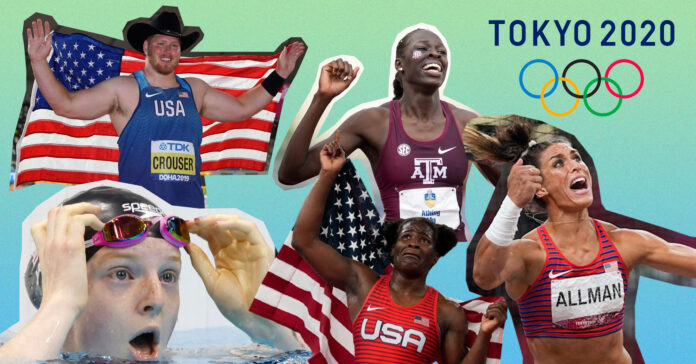 Athletes representing the United States at the 2020 Olympics led the country to the first place in the medal ranking.

There were roughly 100 athletes with Texan ties, many of whom also came back home as Olympic medalists.

According to the University of Texas, if current and former UT athletes were competing as a separate country, Texas would have ranked in 17th place among all nations in the number of gold medals earned and tied for 26th in the number of total medals won.

Here’s a list of Texans who brought gold medals to the Lonestar State.

1. Lydia Jacoby, from the University of Texas: She’s a 17-year-old who won gold at the women’s 100m breaststroke, also winning silver in women’s 4x100m medley relay.

2. Tamyra Mensah-Stock, Texas native from Katy: She won first place at the women’s 68kg freestyle, becoming the second wrestling gold medal ever claimed by an American woman and first for a black woman.

4. Athing Mu, Texas A&M track star: Mu won two gold medals, the first one in women’s 800m and the second one in women’s 4x400m relay. As reported by Kxan, she also became the fourth Aggie to earn a medal in Tokyo and the first American woman in more than 50 years to win a gold medal in the 800m race.

6. Bryce Deadmon, Aggie runner: Bryce won a medal at the men’s 4×400 relay and bronze at the 4×400 mixed relay, also the first Aggie to become an Olympic medalist at the 2020 games.