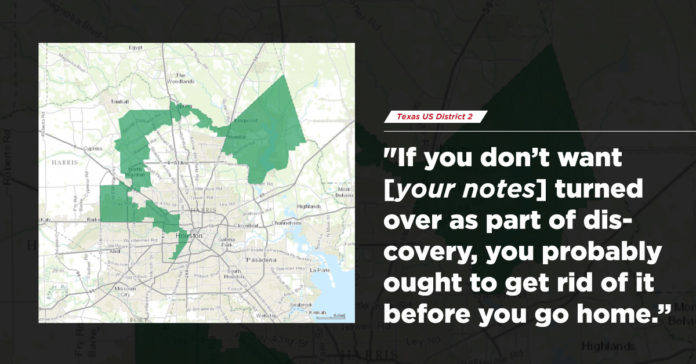 “Start with the idea that you’re going to be sued,” Cleta Mitchell said to a hotel conference room filled with Texas lawmakers.

Mitchell, a lawyer and conservative activist, was talking to the legislators as part of the American Legislative Exchange Council’s annual meeting. ALEC,a corporate interest lobbying group, held its annual meeting in Austin earlier this month.

Mitchell warned the 200 or so legislators in attendance that “the very existence of [a] panel” called “How to Survive Redistricting” could lead to lawsuits based on a false narrative that “we’re teaching you how to gerrymander.”’

“Your notes from this conference and this workshop will probably be part of a discovery [in a future lawsuit],” she added. “So my advice is if you don’t want it turned over as part of discovery, you probably ought to get rid of it before you go home.”

It’s no understatement to say that the upcoming redistricting fight is sharpening elbows throughout Texas politics. After every Census, advocacy groups, lawmakers and the courts fight over Texas’ political boundaries — and 2020 is already showing signs of a bruising battle.

Following this summer’s Supreme Court decision that “federal courts will have no role in disputes over congressional districts drawn for partisan gain,” voting rights advocates fear that “one-party rule in many states “will be uncontrolled.”’

And when it comes to out of control one-party rule, there aren’t a lot of places that do it better than Texas. In the state’s long history of lopsided legislature, the State House hasn’t been balanced since 2002, leaving politicians on both sides of the aisle worried.

For decades the lines in the sand that define congressional and state House districts have been used to create advantageous voting blocs, rather than encouraging competitive elections.

In Texas, the GOP’s majority ensured safe Republican seats for decades. Recently, groups like ALEC and politicians like Gov. Greg Abbott are sounding the alarm about what might happen to redistricting if Democrats win enough seats to flip the Texas House.

“Barack Obama and Eric Holder … are trying to do whatever they can to reshape the redistricting process in Texas,” Abbott told the Austin American-Statesman in June.

Concerns about outside involvement in Texas’ redistricting process was one of the reasons Texas lawmakers passed a bill ensuring all communications relating to legislating, including anything about redistricting, can stay hidden from the public.

Rep. Charlie Geren (R-Fort Worth), one of the bill’s authors, admitted the new secrecy law would hamper efforts to possible future challenges to the state’s redistricting maps.

The new law prevents the release of communications “given privately,” and was — at least in part — motivated by a 2011 lawsuit when lawmakers were ordered to release “damning emails that helped advocates prove the state’s voting maps were racially gerrymandered.”

Transparency concerns, coupled with increasingly high stakes, have led some advocacy groups to call  for an independent citizens commission to oversee Texas’ redistricting in a nonpartisan manner. In a June interview with the Statesman, Abbott said nonpartisan redistrcting is “an oxymoron.”

“This is just not the nature of redistricting,” he said. Without an indepedent body to draw Texas’ districts, the task falls to the Texas House’s 2021 Redistricting Committee. Lt. Gov. Dan Patrick appointed 10 Republicans and seven Democrats to the committee just days after the Supreme Court ruling.

The Republican dominated committee’s membership is expected to undergo some changes after next year’s elections. However, the conservative beliefs of Patrtick’s appointments have already led some commenters to declare the 2020s “another Republican decade.”

After the committee finishes drawing the district maps, they are sent to the State Legislature for approval. If the 87th Legislature can’t come to a consensus about district borders, the maps are sent down range to the Legislative Redistricting Board (LRB).

The LRB is made up of five Republican members: the lieutenant governor, the speaker of the house, the attorney general, the comptroller and the commissioner of the general land office.

The possible political influence on Texas’ redistricting process has caused some activists great concern.
“When the people who are going to be running the districts are drawing the maps, it’s really about amassing power for themselves and for their political party,”Anthony Gutierrez, executive director of Common Cause Texas, said to the Texas Tribune.