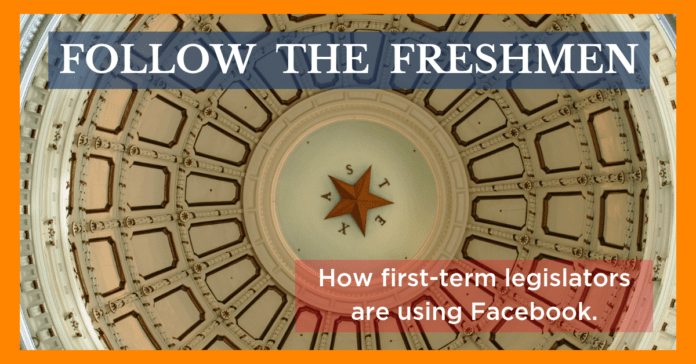 Seventh in an ongoing series
In recent years, social media has become one of the most important and useful platforms legislators use to communicate with their constituents.
With midterm elections in the rearview mirror and the 86th Legislative Session nearing its end, we wondered, are legislators prioritizing communication with their constituents via social media?
Reform Austin looked into the House and Senate freshmen’s Facebook, Twitter, and Instagram accounts over the first two weeks of April and compared their follower numbers, likes, posts, total engagement, average engagement per post, and paid ads.

Comparing all House Freshmen on their Facebook use and average engagement.

Out of the 30 new House freshmen, one State Representative has been consistent in receiving the most engagement over all platforms – Rep. James Talarico (D – Round Rock). Rep. Talarico maintains a good relationship with his constituents and posts about issues he believes they care about. With 7,019 followers, he has the second most followers on Facebook, yet beats Rep. Steve Toth (R – The Woodlands), who has 10,396 followers, in average engagement per post. Rep. Talarico posted twice and received an average of 760 engagement per post.
Rep. Mayes Middleton (R – Wallisville) has the highest average engagement out of the Republicans on Facebook with 12 posts receiving an average of 187.
On the other end of the spectrum, the lowest Democrat and Republican, are Rep. Leo Pacheco (D – San Antonio) and Rep. Sam Harless (R – Spring). Rep. Pacheco had not posted in the first two weeks of April, while Rep. Harless posted 28 times receiving an average engagement of 36. Out of the 28 posts he made on Facebook, 8 of them were ads he paid money to reach more people. He paid <$100 on each post.

Comparing all Senate Freshmen on their Facebook use and average engagement.

Sen. Beverly Powell (D – Burleson) and Sen. Pat Fallon (R – Prosper) are the leading Democrat and Republican freshmen Senators who have received the most average per post on Facebook. Sen. Powell received an average of 211 over two posts and Sen. Fallon received 1,252 on his one post. Sen. Fallon has the most followers at 33,506 and paid <$100 on his post.
The lowest Democrat and Republican, are Sen. Carol Alvarado (D – Houston) and Sen. Angela Paxton (R – McKinney). Sen. Alvarado posted 40 times in the first two weeks of April, the most out of all the freshmen Senators, receiving an average of 21 per post. Sen. Paxton posted 14 times receiving an average engagement of 156.

Reform Austin will continue tracking the social media of freshman legislators and will report on their Twitter over the first two weeks in April the following week.