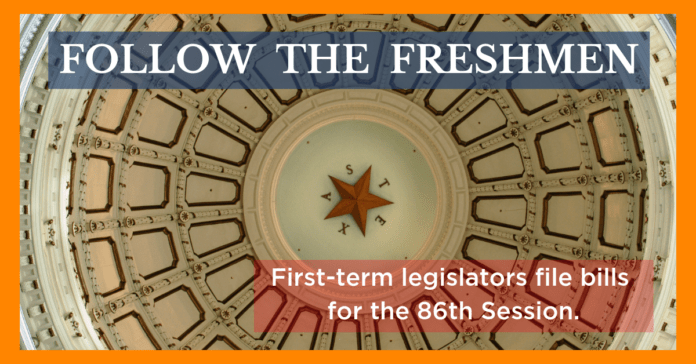 First in an occasional series
The 86th session of the Texas Legislature welcomed 34 new members last month, with 28 members sworn into the Texas House and six members sworn into the Texas Senate for their first sessions. On Tuesday night, Art Fierro became the newest member of the Texas House of Representatives when he captured the special election in House District 79.
With most new members having now been in office for a month, many have introduced legislation. So far, 53 bills have been introduced by 19 freshman House members, while 32 bills have been filed by six freshman Senators.
In the Texas House of Representatives, John Bucy (D-Austin) leads the pack of freshmen, introducing seven House Bills, including on Medicaid expansion and public education funding. Other new members, however, including Ana-Maria Ramos (D-Dallas), and Reggie Smith (R-Sherman) have yet to introduce any legislation. In the Senate, Pat Fallon (R-Prosper), a former State House Member, leads his fellow freshmen with nine new Senate Bills introduced.
From the Democratic freshmen in the Texas House, Gina Calanni (D-Katy) and Terry Meza (D-Irving) have filed legislation to tackle some of Texas’ most pressing issues. Almost immediately after her swearing-in Rep. Calanni, who won her election by a slim margin, filed House Bill 992 to help battle Texas’ maternal mortality crisis by reinstating the Women’s Health Advisory Committee. Rep. Meza has introduced 12 pieces of legislation, including sole authorship of four bills and joint authorship of eight others. Rep. Meza ran her campaign on making college and healthcare more affordable for hardworking Texans and her first bill, House Bill 1040, aims to provide a program for tuition-free community college and technical schools.
For the Republican House freshmen, Jared Patterson (R-Frisco) and Steve Toth (R-The Woodlands), have filed the newest pieces of legislation. Shortly after his swearing in Rep. Patterson filed four new bills including House Bill 803, which relates to the financial disclosures of Texas Toll Projects. Rep. Toth also introduced two new pieces of legislation including House Bill 1042, which would create a Campus Active Shooter Response Plan.
In the Senate, Beverly Powell (D-Burleson) has filed five new bills including Senate Bill 352, which would allow local workforce development boards, public libraries, and ISD’s to access skills development funds to provide assessment and training. Sen. Nathan Johnson (D-Dallas) has also filed three new pieces of legislation including Senate Bill 460, which would reduce the criminal penalties for possession of marijuana.
Among Republican freshmen, Pat Fallon (R-Prosper) has introduced nine new pieces of legislation including Senate Bill 459, which establishes consequences from violations detected by red light cameras. Senator Pete Flores (R-San Antonio), who won a special election in September, is the sole author of six new Senate bills including Senate Bill 211, which aims to reform the way Texans protest and appeal their property taxes.
According to Anthony Gutierrez, the Executive Director of Common Cause Texas, once a bill is filed in the Texas Legislature “the Speaker of the House or Lieutenant Governor are charged with determining which Committee to send each bill to. Once the bill goes to Committee, it will sit there until the Chair of the Committee decides to bring it up for a hearing.”
Gutierrez also observed, for the new members in the Legislature, “it is important to make clear that you’re someone who is to be taken seriously. Introducing a bunch of inconsequential bills, or bills that seem to serve personal political ambitions ahead of a public policy, are good ways to lose credibility in a hurry.”
Overall, legislators should be evaluated not only on the volume of bills they introduce but on the bills they pass. Reform Austin will continue to monitor and evaluate legislative introductions, and share the information with taxpayers.
Reform Austin has been tracking the number of bills each freshman legislator has introduced and sponsored in the first month of the session.