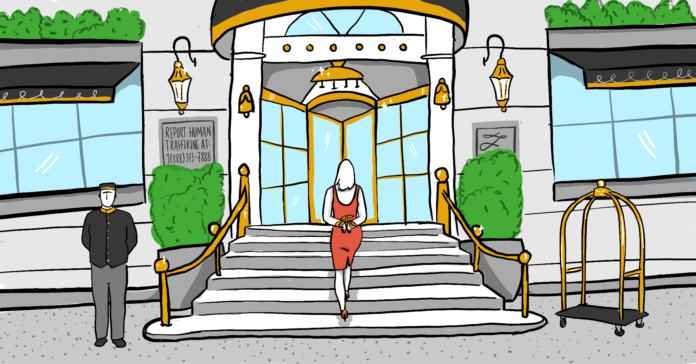 Asked to describe Texas’ largest city, most think of Houston’s NASA Space Center, the Astros baseball team, or the city’s role as a dominant force in the oil and gas industry. But the Bayou City’s size and location also brings a darker side to its reputation: Houston is a major hub for human trafficking.

Though some strides have been made in recent years to curb the problem, potential solutions surrounding the state’s hotel industry don’t always enter into legislative discussions, despite the significant role these establishments play in the web of human trafficking.

In September 2003, with the signing of House Bill 2096, Texas became one of the first of two states to prohibit human trafficking. The Texas attorney general’s office reports that at any given time there are 79,000 victims of minor sex trafficking in the state. “Human trafficking is modern-day slavery. It is the exploitation of men, women, and children for forced labor or sex by a third-party for profit or gain.”

In the summer of 2019, Gov. Greg Abbott signed House Bill 8 authored by Rep. Victoria Neave, (D-Dallas). Neave was spurred to create legislation when she saw the backlog of rape kits of survivors of sexual assault, including one that sat untested for over 20 years. The Dallas Morning News reported that the bill requires an audit to gather the number, status and location of all the rape kits in the state and to create a timeline to prevent further backlogs.

Gov. Abbott signed four other bills related to human trafficking, including Senate Bill 71 which allows medical providers across Texas who perform sexual assault exams to align with nurses who are trained in providing care to victims of sexual assult via a statewide “telehealth center.”

Can hotels do more for sex trafficking victims?

Currently, Texas hotels are not required by law to participate in human trafficking awareness training, which means any measures taken by those in the industry are self-regulated.

The Texas Hotel & Lodging Association told Reform Austin that the association and its member hotels “are committed to ending human trafficking and slavery across the nation. We have engaged in several awareness campaigns, with the most current being our “No Room for Trafficking” campaign, which provides employees with ways to “identify traffickers and potential victims in hotels.”

The Association also partners with state agencies, and cited “a day-long forum at the Texas Capitol in conjunction with the Texas Secretary of State on the importance of ending human trafficking and slavery” in October 2019 as an example.

The Greater Houston Partnership states that there are 934 hotel properties across Houston, and THLA told Reform Austin, “We do make our training available to non-members when requested at no charge, although most of those hotels receive training through their affiliated hotel brands. For truly independent, non-member hotels, we encourage them to get training through their local association such as the Small & Independent Motel Association.”

The Hotel & Lodging Association of Greater Houston has a website page dedicated to human trafficking prevention. It states that “approximately 10 percent of known trafficking cases reported to [the association] in 2017 occurred in a hotel or motel.”

When it comes to how many cases go unreported, Dr. Bruce Kellison the Director of Bureau of Business Research, IC2 Institute, at the University of Texas at Austin told Reform Austin, “The issue confronting human trafficking advocates, in describing the extent of the problem, is that it’s a largely invisible crime happening in society’s shadows. Just counting the number of prosecuted cases of human trafficking is not enough.”

Dr. Kellison’s suggestion to help survivors of labor and sex trafficking includes “reach[ing] out to vulnerable segments of our population with awareness and education campaigns to prevent human trafficking before it begins.”

Combating human trafficking in Texas may not be solved solely with legislation; it will take a coalition of nonprofits, elected officials, law enforcement, and the hotel industry working together to make a dent.

Legislators could ensure compliance from the hotel industry by creating laws that require staff training and stated policies at hotels in the state.

Polaris has operated the U.S. National Human Trafficking Hotline for more than a decade, and its recommendations for the hospitality industry include “adopt[ing] a company-wide anti-trafficking policy,” “establishing MOU’s (a formal agreement) with local anti-trafficking shelters,” and staff training that creates “strong education protocols…in collaboration with survivors, include annual training.”