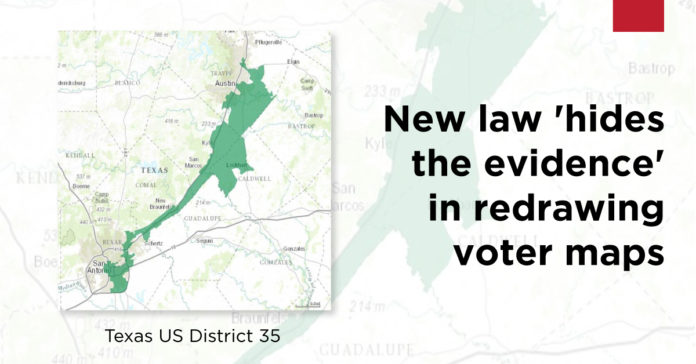 In light of the recent Supreme Court’s ruling on gerrymandering, it was clear that certain Texas voters would experience disenfranchisement at the hands of state legislators.

The case for gerrymandering to weaken the influence of minority voters was undeniable in a cache of emails the United States Justice Department cited in 2011 to prove racial discrimination hid under the guise of partisan tactics for Texas voters.

In what seems like a response to hide future evidence and accountability, Texas legislators recently passed a law, House Bill 4181, which ensures that all communications surrounding the redistricting process can remain secret from the public. This makes it much more difficult to wage future challenges or definitively determine the reasoning behind gerrymandered districts.

The law offers what it calls “legislative privilege” to private communications related to “a legislative activity or function.” Though this covers communications related to any number of subjects, one of the law’s authors, Rep. Charlie Geren (R-Fort Worth), acknowledged the 2011 legal challenge and emails specifically in a statement to The Dallas Morning News, indicating that he was aware his law would keep this from happening again.

Given the stakes for redrawn district maps in 2021, there are concerns that the 2010 redistricting scheme could repeat itself, despite a surge in massive population growth among the state’s Hispanic populations. The U.S. Census Bureau’s recent population estimates showed the Hispanic population in Texas climbed to nearly 11.4 million, an increase of 1.9 million since 2010.

Between 2000 and 2010 the state’s Hispanic population grew by 2.8 million people, with 65 percent of the total population growth from that period, allowing Texas to gain four new seats in the United States House of Representatives.

Yet through the process of aggressive gerrymandering, the state was able to create three more congressional districts which were majority white, while only one of the new districts was majority Hispanic. Despite experiencing the least amount of growth, the white, mostly rural population now receives the most representation.

Like 2011, all can expect gerrymandering to be a major fight in the 2021 legislative session, and the Supreme Court’s ruling on gerrymandering gives new urgency to next year’s elections.