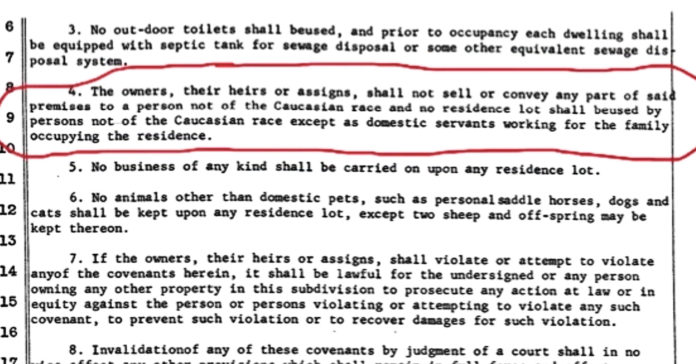 There is a lurking, racist ideal buried deep in the documents held by hundreds of thousands of homeowners across the country that often goes unnoticed: racially restrictive covenants. And, as the fight for racial justice continues, this is something that must be addressed.

Covenants and deed restrictions are essentially language written into documents that explain the way a property can (or cannot) be used. In theory, they are supposed to make a property more valuable or marketable. Racially restrictive covenants, which barred non-white residents from neighborhoods, were first seen in Massachusetts and California in the late 1800s, and they quickly spread throughout the United States in the early 20th century.

Here’s an example of something that was written into a deed when a white family purchased a home: “… hereafter no part of said property or any portion thereof shall be … occupied by any person not of the Caucasian race.” This language was rooted in Jim Crow laws, with the specific intention of enforcing segregation, treating Black individuals as second-class citizens, and perpetuating anti-Black racism.

Pretty terrible, right? The good thing is, by the late 1960s, racially restrictive covenants were, and are, no longer enforceable. The bad thing is, there was never a ruling to actually remove the racist language from property deeds. As such, they are still embedded in deeds in thousands of towns and cities across the country. These deeds are a reminder of a painful past — of systemic, segregationist housing practices that limited the economic and social mobility of millions of people of color. In fact, Nancy Walsh, who studies social and environmental justice in the urban environment, reports that these racially restrictive covenants signal tone and intent. They can perpetuate segregation and be psychologically damaging.

So what is there to do?

Two things — for starters, it is time that states step up by changing the law and removing historically racist language from property deeds. It is important to note that before any offensive language can be erased, state lawmakers must establish changes in the law to allow alteration of historical documents.

Some states have begun to do this — in Washington state, as of early 2019, homeowners may submit modification documents to strike down racist language (but it does not delete it from the historic record). In Minnesota and California, people can ask to attach a modification document to their deed saying that the offensive language is now illegal. House Bill 4134 in Oregon allows property owners to remove discriminatory restrictions by petitioning their county’s circuit court without a fee.

Secondly, since it is unlikely that widespread adoption of this practice will take place across the 50 states, we could modify the document itself in a different way.

Richard Rothstein, author of “The Color of Law,” suggests that a clause be added to a covenant which reads: “We, [your name], owners of the property at [your address], acknowledge that this deed includes an unenforceable, unlawful, and morally repugnant clause excluding African Americans from this neighborhood. We repudiate this clause and are ashamed for our country that many once considered it acceptable, and state that we welcome with enthusiasm and without reservation neighbors of all races and ethnicities.”

Since actual, widespread change in state laws might be far off, this seems like a promising first step. It acknowledges the horrible, racist past of Jim Crow laws and housing segregation and brings to light something that is hidden in housing documents around the country. It’s a start. And, as the country begins to change, perhaps we can have more success in changing state law. The fight for racial justice continues.

Olson is the assistant director of policy research at the Institute for Urban Policy Research and Analysis, housed in the Black Studies Department at UT-Austin.

This op-ed was originally written for the Houston Chronicle. It is republished here with the permission of the author.