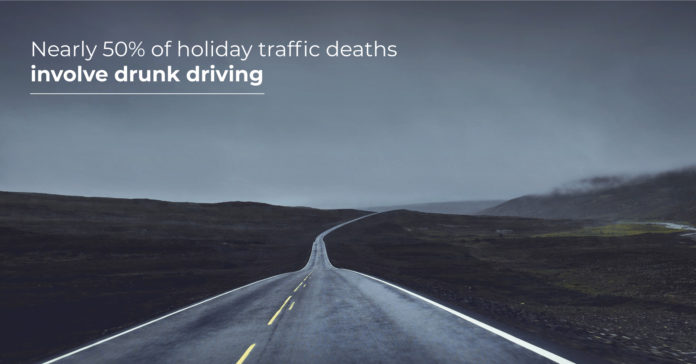 The holidays are here, and that means dashing through the… unseasonable warmth to visit grandparents, attend office parties, and beg any open restaurant to feed you because you forgot to stock your pantry before all the stores closed.

And between all the festivities, traversing holiday roads and attempting to stay safe.

It’s a well-understood fact that New Year’s Eve is a prime time for drunk driving, but avoiding driving that day will not guarantee safety. According to the National Highway Traffic Safety Administration (NHTSA), the entire span of months between Thanksgiving and January 1 sees elevated levels of drunk driving accidents.

The U.S. National Institute on Alcohol Abuse and Alcoholism (NIAAA) says that nearly half of the traffic deaths that occur around the holidays involve drunk driving. In general, the national average of traffic fatalities per day rise between 30 and 50 percent.

This is especially problematic in Texas, where many cities spread out far away from each other mean more chances to fall asleep or get distracted, all of which increase with alcohol use. Nana’s ranch house twenty miles outside the city might be the perfect spot for a large family gathering, but there is often a lot of dark road between there and your home.

In 2017, the NHTSA reported that 1,468 people had died in drunk driving incidences in Texas, the most of any state in the country. Harris County led the state in incidences (151), with Dallas and Bexar Counties following close behind.

So, drinking and driving are elevated in Texas over the holidays to a particularly fatal degree. What should be done about it?

The most obvious answers are to not drink and drive. Even if you’re sober, try to plan your driving around daylight hours so you can avoid compounding the problem of other inebriated drivers with tiredness and low visibility.

Be careful about letting your children play outside after dark if they are near roadways. I will never forget a drunk driver fatally shearing through two light poles on Christmas Eve within twenty feet of my daughter’s elementary school playground.

If you need a ride, there are lots of options. The Houston law firm Sutliffe and Stout started a free holiday ride service after hearing about construction worker Brandon Patterson losing his leg and career in a horrific accident. They reimburse ride shares and taxis on New Year’s Eve and Day in Houston, Austin, San Angelo, Odessa/Midland and the Highland Lakes area. SoberRides.org is another handy way to responsibly plan for a night where you plan to imbibe.

Even if you don’t hurt someone, avoiding drunk driving is in your personal interest. The Texas penalties for driving while intoxicated (DWI) are up to $2,000 in fines and 180 days in jail. Plus, you will likely have your license suspended. In a state that is not known for good public transportation options, this can severely impact your life.

Be merry this holiday season, but be safe. The dangers are real and should be accounted for if you want to avoid tragedies. Consider staying at relatives’ houses for the evening instead of driving home; avoid long drives in the dark; and if you have to drink, do so responsibly. No one wants Santa to have to deliver presents in the hospital.