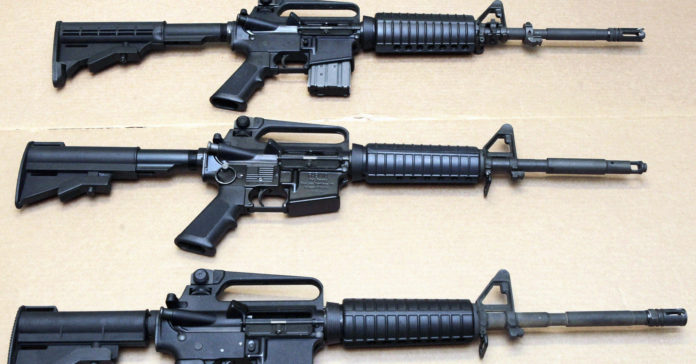 Governor Greg Abbott has recommitted himself to having as little gun control in Texas as possible even as the nation is rocked by two horrific mass shootings within a week of each other.

Last week in the Atlanta area in Georgia, the man who went on an eight-person killing spree targeting Asian-Americans had purchased the gun he used on the same day he began his massacre. There was no waiting period or mandatory safety class. His transaction likely took no longer than a trip through the Whataburger drive thru. Georgia is ranked Number 11 by Guns & Ammo for best states to buy guns (meaning fewest restrictions).

This week, the man who opened fire in a King Sooper in Boulder, Colorado also had no problem purchasing his Ruger AR-556 pistol seven days before his attack that killed ten people: Eric Talley, Tralona Bartkowiak, Suzanne Fountain, Teri Leiker, Kevin Mahoney, Lynn Murray, Rikki Olds, Neven Stanisic, Denny Strong, and Jody Waters. The shooter had a long record of violence, including at least two interactions involving “criminal mischief” with the Boulder Police Department, a conviction for misdemeanor assault, a long history of violence in high school, and a penchant for paranoid rantings on social media. None of this prevented him from easily obtaining his weapon. Colorado is ranked Number 40 on the Guns & Ammo list.

Nonetheless, Governor Greg Abbott has continued in his crusade to make Texas a Second Amendment Sanctuary State where guns are even easier to get than they were in the recent massacres (Texas is Number 10 already on the Guns & Ammo list). On March 18, he tweeted his support for fewer restrictions and a law that would supposedly prevent state and local agencies from following new federal restrictions. Previously, Abbott had expressed some support for new gun control laws after a massacre in El Paso killed dozens of Texans, but no movement in the area has been seen from him since. Instead, he touted the Sanctuary State idea in his state-of-the-state address this year.

President Joe Biden has called on congress to enact gun control legislation in the wake of the shootings, including an assault rifle ban and expanded background checks. These initiatives are supported by a large majority of Americans.

The new bill, House Bill 2622 comes form State Rep. Joseph Holland (R-Heath). It aims to thwart any future restrictions that may come from the Biden Administration. Preemptive anti-gun grab laws are a favorite of Texas Republicans during the terms of Democratic presidents despite the fact that the only meaningful amount of gun control enacted on a federal level in the last twenty years was done by former President Donald Trump when he banned bump stocks.

“I look forward to working with Senator Springer and Governor Abbott on passing the Second Amendment Sanctuary State Act this legislative session,” Representative Holland said in a statement, “Now is the time to step up and protect our 2nd Amendment rights in Texas. We can’t rely on the Federal Government to lead on this issue and in reality – they will do vastly more harm than good for gun rights. The State of Texas is now and forever shall be a place of refuge for the 2nd Amendment and our ability to protect ourselves, our families, homes and businesses.”

States do not have the authority to override federal law. The right to regulate firearms is explicitly spelled out in the United States Constitution as under federal jurisdiction, and centuries of legal precedent have upheld that right. In the landmark 2008 Heller case, conservative judicial icon Antonin Scalia re-affirmed that the Second Amendment is “not a right to keep and carry any weapon whatsoever in any manner whatsoever and for whatever purpose” even as the ruling constitutionally protected owning a handgun for personal protection.

“Proponents of Second Amendment sanctuary cities and counties largely ignore the teaching of Heller, instead pronouncing any gun-control legislation unconstitutional, whether it requires backgrounds checks or a waiting period, raises the legal age for gun ownership, bans bump-stock devices that allow for rapid firing, prohibits weapons in government buildings, or outlaws assault-style rifles,” said  former acting assistant attorney general for national security and legal director of Georgetown University Law Center’s Institute for Constitutional Advocacy and Protection Mary B. McCord in a Washington Post opinion piece. “Rather than engaging in a bill-by-bill discussion of proposed legislation, these advocates whip up hysteria by painting with a broad brush, arguing that all gun-control legislation is part of a conspiracy of liberals who ‘want to take your guns.’”

House Bill 2622 is taking up the limited and valuable time of the Texas Legislature during periods of profound crises that need action. There’s little reason to think Abbott and Holland will not continue with their mannerless comedy, though, even as there is every reason to believe that more mass shootings will be happening in the very near future.