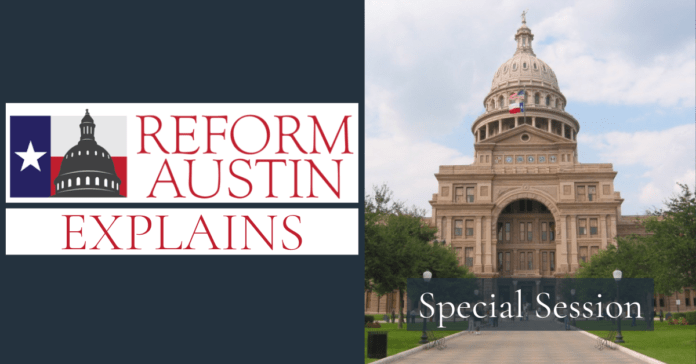 Starting on the second Tuesday of January in every odd-numbered year, the Texas Legislature holds what is called a Regular Session to consider legislation and make appropriations for the next two years.  A regular session last for 140 days, during which bills are introduced, go through the committee process, then to the floor in their respective chamber.  If bills pass through both chambers, they are sent to the governor for approval or veto.
Many taxpayers wonder – if the session only lasts for 140 days, what happens if there is important legislation which did not get passed?  Does the Texas Legislators leave and wait until the next session to address those issues?  What about emergencies which require immediate action – do Texans have to wait a year or more for the state to take action?
In these instances, the Texas Constitution grants the governor the power to convene what is called a Special Session, which requires all Texas Legislators return to the Capitol to consider legislation.
Reform Austin has prepared some answers to frequently asked questions about Special Sessions, and what they can expect if one is called in 2019. 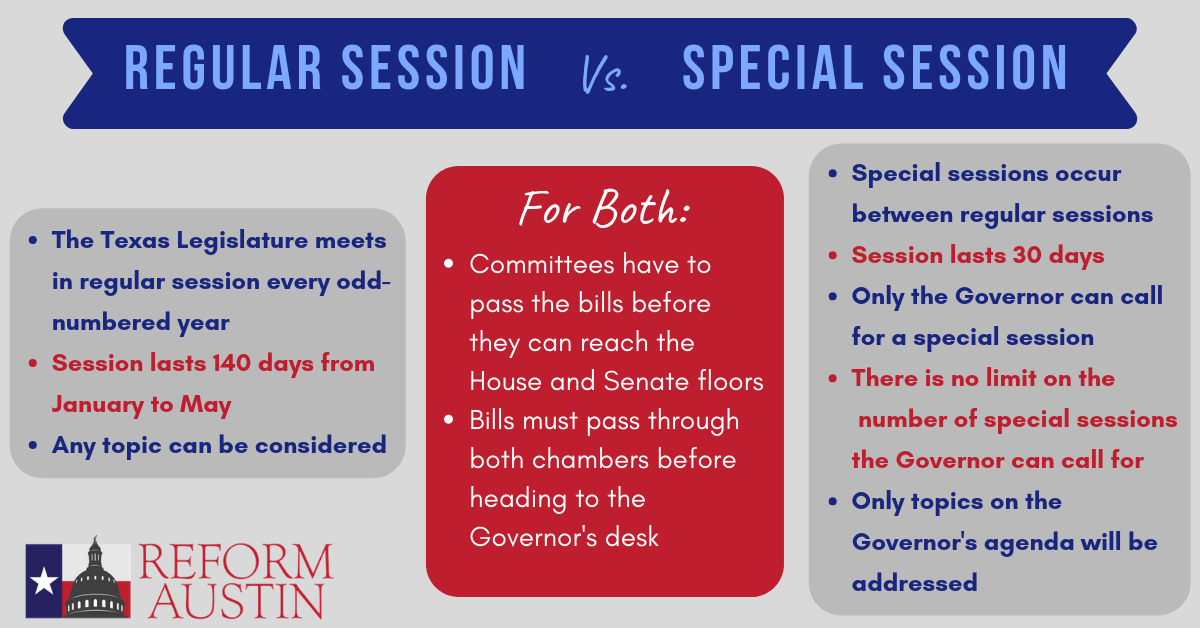 What is a Special Session?

As explained above, a special session is convened to consider legislation and resolve issues which did not get passed during the regular session.

How does a Special Session get started?

How long does a Special Session last?

What is the bill process during a Special Session?

During a special session, the legislative process is the same as for a regular session. A bill must be introduced, go through committee, pass through both chambers, and then be signed by the governor to become law.

What can be considered in a Special Session?

The governor sets the dates of the special session and defines the topics to be addressed. There are no restrictions on the topics, but only the topics identified by the governor can be considered. Only the governor has the authority to add or remove items from the call list.

Can the Legislature consider other topics?

Texas Legislators are able to file bills under topics not on the call list set by the governor, but those bills cannot be legally considered during this time. However, if the governor sees a bill is gaining traction, they can add it to the call list, allowing the legislation to pass.

Can the governor call for another special session?

The governor can call for as many special sessions as they want.

What does a Special Session cost?

Texas Legislators are paid $190 per day when they are in session. There are also overhead, overtime, and other costs to be paid. The 85th special session in 2017 cost taxpayers more than $1 million.

How often do Special Sessions occur?

Over the last 10 years, there has been at least one special session every odd-numbered year, except in 2015 during the 84th session.

Can Legislators fundraise during Special Sessions?

Texas law prohibits fundraising during the Regular Session of the Legislature, but there is not a similar prohibition during Special Sessions.  In 2017, there was controversy over this loophole, as many legislators held fundraisers during the Special Session.