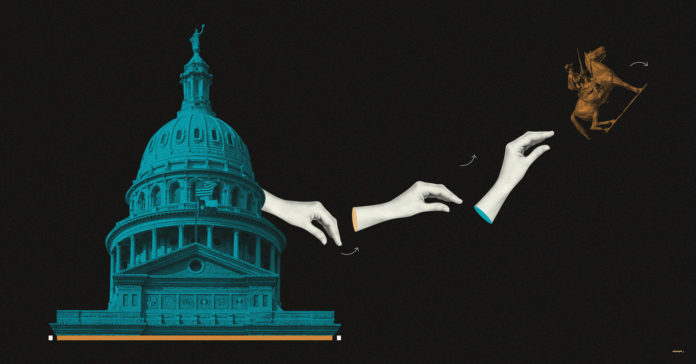 A letter sent Monday to state Sen. Bryan Hughes (R-Mineola) and state Rep. Charlie Geren (R-Fort Worth), leaders of the Senate and House administration committees, calls for the renaming of the John H. Reagan State Office Building and the removal of the following:

“The back-to-back killings of Ahmaud Arbery, Breonna Taylor and George Floyd sparked protests across our country, including some reaching the tens of thousands here in Texas. As a result of the senseless murders of these African Americans, conversations have begun regarding criminal justice reform, law enforcement priorities, issues related to race relations, and the age-old debate related to Confederate monuments and memorials,” reads the letter to the two Republican committee leaders.

The letter asks, “as legislators, we are uniquely positioned to make decisions that impact the lives of so many. And today we find ourselves at a crossroad — we will situate ourselves on the right side of history by removing these symbols of hostility, or will we continue to side with the ‘tradition’ and ignore the ills of our past?”