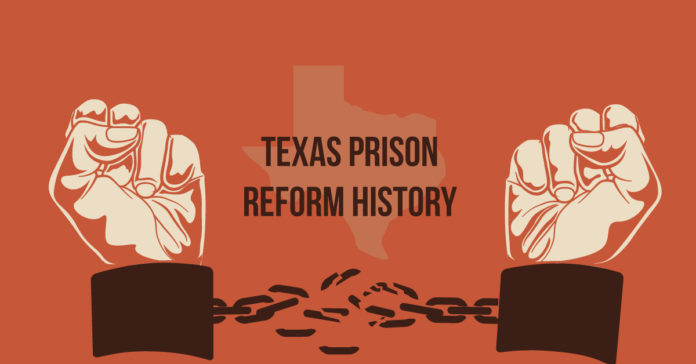 As county jails and state prisons swell and Texans are herded into correctional facilities, reducing incarceration rates through reform has gained traction among some elected officials and district attorneys.

Texas ranks number seven globally when it comes to incarceration rates, with 284 individuals per 100,000 people, according to the Prison Policy Initiative’s 2018 Global Context report on states of incarceration.

Incidentally, our neighbor across the Red River owned the number one ranking at 1,079 individuals jailed or imprisoned. To put these numbers in perspective, Iran’s figure was 284—well below any American state.

With that narrative in mind, several Lone Star State district attorneys have launched their counties on a trajectory to stimulate decarceration or decrease jail populations.

“On the front end, we’re trying to keep people that don’t belong in jail out of jail,” said Mark Gonzalez, the district attorney for Nueces County, in a phone interview with Reform Austin. “And if you ask me, most misdemeanor cases actually don’t belong in jail. That’s just my personal feeling, my policy feeling…it’s just the public safety.”

“There was already a sentiment in the ‘70s in Travis County that you didn’t want to over incarcerate…Travis County’s consciousness about over-incarceration goes back a long way,” she explained in a phone interview with Reform Austin.

And that mindset has not been relegated to history. The mean for incarcerated people in Travis County in 2019 was 2,200, the lowest since before 2009.

Bexar County’s nascent cite and release program permits officers to issue citations to low-level offenders instead of making an arrest for several misdemeanors, including possession of up to four ounces of marijuana and property damage that totals less than $750.

Moore said Travis County is experiencing an increase in their community supervision sentences and diversion dispositions, indicating they’ve used what juries have decided, how judges sentence and the prevailing sentiment of the community as guides for establishing policy in lower-level cases.

“And we’re seeing under the policies we have…our attitude about sentences…We’re seeing a decline in the number of individuals being incarcerated at any level; TDCJ, state jail, Travis County jail,” she said.

Moore said some juries have even given probation in aggravated robbery cases, something that at one time would never have happened in Travis County.

“But we have learned from jury verdicts that…if the individual is young, if the record is short, if there’s some other extenuating, mitigating factors, that they will give probation. And so we have taken those jury verdicts into our factoring…when we make our recommendations,” she said.

Like Bexar County, Nueces County has its own cite and release policy. Gonzalez believes it’s having a positive effect on the community. He was approached by a woman at H-E-B who wanted to thank him for a ticket she received. The woman had been pulled over for speeding and admitted to possessing marijuana. The officer wrote her a ticket and the woman thanked him.

“And the officer told her, ‘don’t thank me, thank the DA,’” Gonzalez recounted. “And so when she saw me she wanted to thank me for that because she got to go to work that evening. She got to take her kid to school that morning, the next morning…that one person was impacted.”

Historically, Texas has been labeled as a state that likes to jail people, a reflection of consistently high incarceration rates. Legislation has played a large role in this issue.

“We got into this problem via ‘death-by-a-1000-cuts’ and it wasn’t any one thing…mass incarceration was caused by hundreds and hundreds of pieces of legislation over the past 30 years,” said Scott Henson, Just Liberty policy director and author of the Grits For Breakfast blog.

Prison Legal News reported in early 2018 that during three legislative sessions, dating back to 2007, no proposed parole or sentencing reform bills were passed, yet 33 new crimes were added to the books and 20 bills lengthened sentences for existing crimes.

A 2000 analysis on incarceration authored by the Justice Policy Institute reported that in 1999 Texas had the highest incarceration population in the nation at 706,600 — comprising probation and parole too — and the Oklahoma-like 1,035 for every 100,000 people.

The analysis also noted that in 1994 Texas had 92,669 prisoners, which soared to 149,684 by 1999. Additionally, between 1990 and 2000, Texas led the U.S. in prison system growth with the Lone Star State incarcerating approximately one in five prisoners nationally.

“There is bipartisan support for certain reforms and there remains significant opposition from largely prosecutors and the police unions. And there’s a few of these so-called progressive prosecutors that are less oppositional.”

Reform is in a state of flux with Dan Patrick and the Texas Senate not moving on anything, and the House open to passing legislation that seeks to make changes, Henson said.

Perhaps what is happening at the county level is indicative of where things are headed.

“I could tell you that in the prior administration you could probably get…state prison jail time on some drug type of cases,” Gonzalez said. “We’re not doing that anymore.”