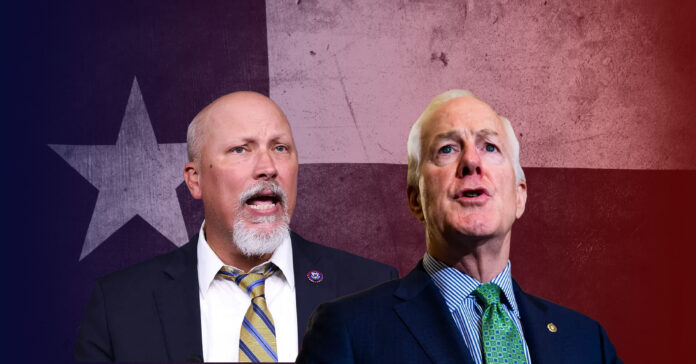 Wednesday, Texas Republican U.S. Rep. Chip Roy railed against the $1.7 trillion spending bill that Congress is rushing to pass before the end of the year to keep the government running, despite the support of U.S. Sen. John Cornyn, his former boss.

Republicans like Roy and U.S. Rep. Margerie Taylor Greene of Georgia are complaining that approving the bill by the Friday Deadline “takes away our leverage to force Biden to secure the border.” The pair, along with other MAGA ultra-conservatives, torpedoed the previous version of the bill in September, pushing it back to this week.

Roy slammed Cornyn and 20 other Senate Republicans who supported the spending bill in the Tuesday procedural vote, saying they “represent the tired old #SwampGOP.”

However, the Senate voted 68 to 29 Thursday to pass the legislation, sending it to the House, where Democrats have said they will take it up immediately, and already have enough votes to pass it without no GOP support.

“They are who they are: war-first Republicans who give lip service to securing the border & stopping deficit spending during campaigns, yet are voting right now to support (fund) the opposite,” tweeted the Austin Republican.

Cornyn did not respond to Roy’s criticism, however, the Texas senator has been critical of how the bill was crafted. But he said previously that simply kicking the proverbial can down the road, as Roy and other Republicans have suggested, would only hurt the military, in particular the Pentagon’s ability to continue normal operations.

“This is a terrible situation to be in but we have to play the hand we’ve been dealt, and in my view, the lesser of two evils is the omnibus appropriations bill,” Cornyn said.

The bill also boosts Border Patrol funding by 17 percent, including money the Biden administration has requested to hire 300 more agents as it works to handle a surge of migration at the southern border.

Roy said that means “new DHS money can only be used to process MORE people.” “For Texans, this alone is reason enough to oppose this terrible bill,” he tweeted, tagging Cornyn.

The bill funds the government for the new year, and it includes billions for Ukraine, particularly pertinent with the state visit from Ukrainian President Volodymyr Zelenskyy that took place this week, providing an additional $45 billion in emergency assistance for Ukraine in its continued fight against Russia.

The aid is so crucial to Zelenskyy that his surprise visit, his first since Russia’s invasion began in February, was made to directly address Congress Wednesday night in the U.S. Capitol, where he urgently implored lawmakers to pass the extra funding.

“It is in your power really to help us bring to justice everyone who started this unprovoked and criminal war,” Zelenskyy told Congress. “Let’s do it.”

Ukraine’s infrastructure is being destroyed by Russian attacks, threatening its people as they prepare for the worst winter in memory without electricity or heat in areas already devastated.

Also funded with the passage of the bill will be robust election reforms aimed at preventing another Jan. 6, and funding for health care for U.S. military veterans exposed to toxic chemicals from burn pits when overseas.

The spending plan, broadly broken down here, includes the following:

The disaster relief portion of the bill includes money for communities recovering from hurricanes, wildfires, drought, and other natural disasters, reforms to the Electoral Count Act, and a ban on TikTok on federal agencies’ devices.