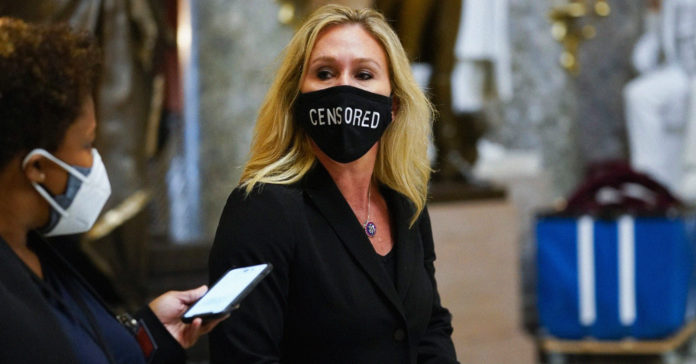 QAnon is either a fringe right wing political ideology or the fastest growing new religion in America depending on who you talk to. Despite the fact that its adherents have been repeatedly linked to violence such as the attempted insurrection at the United States Capitol on January 6, few Texas Republicans have tried to distance themselves from the movement.

In brief, QAnon is a loose confederation of conspiracy theories supposedly being revealed from a source deep inside the federal government. These beliefs primarily center on the idea that Donald Trump is a messianic figure who was using his presidency to bring down an evil cabal of leftists, some of whom were Satanic and pedophilic cannibals. Tenets also include accusations of massive voter fraud in the 2020 election as well as a theory that President Joe Biden is secretly a Chinese agent (or a body double because these are deeply weird people).

The most prominent QAnon adherent in the federal government is Marjorie Taylor Greene, a Republican from Georgia who has repeated many outrageous claims such as that the Sandy Hook Massacre was staged and that Hillary Clinton had JFK Jr. murdered so she could become a senator. Her behavior was so egregious that the House of Representatives voted to strip her of all her committee assignments, essentially putting her in the corner with nothing to do. In the vote to do so, she was supported by every single Republican of the Texas delegation.

Van Taylor (R-Plano), said he believed Greene when she said that her statements were opinions from her past and not indicative of her current beliefs.

“This idea of cancel culture, this idea that, ‘Oh, you said some things that we don’t like, you can’t apologize for it,’ I don’t think that that’s the way we should be in the Republican Party, really in America,” he said. “I think America needs to be tolerant of diverse opinions, ones that we ourselves don’t hold, and we need to listen to each other.”

Greene immediately reconfirmed her adherence to conspiracy theories after the House vote.

Most Texas Republicans are very careful to not actually say the word QAnon when they express themselves, but their actions often make it very clear that their allegiance lies in that direction. The most prominent of these is Texas Attorney General Ken Paxton, who was present in Washington D.C. during the insurrection. He latched onto a QAnon belief that the instigators of the attack were secretly anti-fascists trying to discredit Trump supporters, a common conspiracy theory that has been thoroughly debunked by the arrests of people with long social media histories of far-right allegiance.

The Attorney General’s office has made at least one minor stand against overt QAnon connections. In August, Assistant Attorney General Nick Moutos lost his job after several racist and QAnon tweets were reported on. He was also fond of physically threatening Democratic politicians on the platform, including telling Former President Barack Obama he looked forward to seeing him on the battlefield of the second Civil War.

It seems as if Texas Republicans are trying to play as coy as they can with the QAnon wing of their party. Texas Republican Party Chair Allen West, long known for his fondness for conspiracy theories, sent what looks like a coded signal to the QAnon crowd this year when he used “We are the storm” in official publicity materials. The Storm is a popular part of the QAnon mythology that relates to the day when Trump will unveil indictments against the leftist cabal. West had also used the phrase in 2020, claiming it was merely a figure of speech instead of a signal of QAnon support.

It may be that Texas Republicans are simply afraid to denounce QAnon. The election for Texas’ 16th District in El Paso was a microcosm of the battle for the Republican Party’s soul when it comes to the conspiracy theories. Though the seat was eventually won by Democrat Veronica Escobar in a landslide, the real fight was in the Republican primary. Eventual nominee Irene Armendariz-Jackson seemed to be a true believer, liking and retweeting several statements from associated accounts. Her opponent, Sam Williams, also dabbled a bit in QAnon content, but later admitted that he did it purely for the followers.

If the battle in El Paso is any indication, there isn’t much political future in hitching the Republican Party to the increasingly unhinged beliefs of QAnon. It’s clearly not the road to electoral victory, though swimming in those social media waters is a popular pastime for many party officials such as Dallas County GOP chair Rodney Anderson and Skyler Blalock, chair of the Republican Party in Zavala County.

It is also worth noting that while Governor Greg Abbott has consistently denounced the most racist and egregious of QAnon content, he himself is one of the Texas Republicans that helped the conspiracy theory ecosystem achieve stable mass. In 2015, he latched onto ridiculous claims that the federal government’s military exercises known as Jade Helm were secretly a plot by then-President Barack Obama to somehow take over Texas and sent the Texas State Guard out to monitor” the exercises.

It was later shown that the entire conspiracy theory was an early proof of concept for the Russian intelligence operation that targeted the 2016 election. Though the incident predates the birth of QAnon, in retrospect the similarities between it and the thought processes behind Abbott and his supporters’ actions and the failed coup at the Capitol are shocking. As Texas Republicans continue to flirt with extremists nonsense, such synergy is only likely to continue.