On January 9, the University of Texas at Austin released a list of 17 employees who had violated the school’s sexual misconduct policy between November 2017 and December 2019. The allegations vary in nature, ranging from inappropriate comments to unwanted sexual advances.

According to the Texas Tribune, 10 of those employed were fired or resigned. The list includes three faculty members, whose cases did not result in termination. This is the second list of its kind published by UT; an earlier one named 11 employees between 2013 and November 2017.

The university has been under pressure from students in recent months to increase transparency around reports of sexual misconduct. The fall 2019 semester saw several student-led protests reacting to two cases regarding professors still teaching at the school.

Amid the frenzy, the Texas legislature passed a bill last year to address the reporting of sexual misconduct cases on campus. Texas universities are now required to post online reports every fall and spring semester disclosing Title IX cases. University employees who have knowledge of incidents and don’t report could be fired or face criminal charges. The universities themselves can also be fined for failure to report.

Senate Bill 212 went into effect January 1, 2020. Up until then, rules and processes for sexual harassment and assault differed from university to university in Texas.

“These different reporters leave holes in the current reporting process at certain institutions and potentially enable certain incidents to fall through the cracks or not be treated equitably,” said Sen. Joan Huffman (R-Houston), who authored the bill, to the Dallas Morning News.

While the new law is seen as a sign of progress, some worry it focuses too much on punishing failures to report, rather than taking disciplinary action toward the actual abusers. However, another bill that passed in 2019, SB 585/HB 1735, requires Texas universities to have clear protocol for reporting as well as punishing sexual assault, sexual harassment, dating violence and stalking. It also demands that schools define which behaviors are forbidden. Additionally, HB 449 will add a note on transcripts if a student is expelled for a non-academic reason.

Uncertainty and differences in opinion for how to treat various misconduct cases were central to the events at UT last year, when students were left wondering why two professors previously accused of sexual harassment had been allowed to return to the school to teach. Some are calling for them to be fired, while others ask for more training and transparency. UT, on their part, claimed the professors had already been disciplined and would not be barred from teaching in the future.

Sahotra Sarkar, a philosophy and biology professor, was put on leave for a semester in 2017 after he allegedly made suggestions to students regarding posing and swimming nude. He started teaching again in the fall of 2017.

In 2018, English associate professor Coleman Hutchison was accused of making inappropriate comments of a sexual nature to students, as well as failing to disclose a consensual relationship with a student. He was disciplined and returned to teaching in the fall of 2019.

While these two allegations weren’t new, students who found out about them after starting classes were upset and taken aback that they didn’t know sooner.

“I did have a lot of positive feelings and thoughts toward [Sarkar] before I found out, and then when I heard that news, it was hard,” said senior Candace Kosted to the Dallas Morning News.

“We don’t know who we’re in a classroom with,” senior Alyssa Ashcraft told the Texas Tribune.

October 25 marked the first day of protests after these revelations—around 60 students participated in a “sit-in for student safety.” Three more protests in November and December followed, as a formal movement called the Coalition Against Sexual Misconduct was created.

After weeks of unrest, UT announced it would hire law firm Husch-Blackwell to investigate the school’s dealings with sexual misconduct. It also established an internal Misconduct Working Group to review its policies. The latter plans to release its recommendation in April. In the meantime, students also got the university to agree to a public forum, which will be held January 27.

UT is not the only school in Texas to go through such turmoil. Texas A&M and Baylor universities were under fire in the last few years for inadequate response to student-on-student sexual assault. In September 2019, the Texas Tribune reported that Texas State significantly underreported rape cases from 2016 and 2017.

Meanwhile, the federal government is proposing changes to Title IX that have even lower standards than those outlined in Texas’ new bills. However, they have yet to be implemented after more than a year of bitter debate. 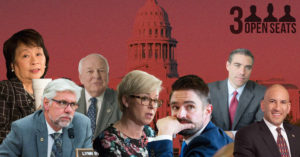 Last September, Reform Austin reported on the top 10 most vulnerable Republican-held districts in the Texas House. Since then, three of the incumbents — State

By Isobella Harkrider A bronze statue of civil rights leader Dr. Martin Luther King Jr. has stood at the University of Texas at Austin campus