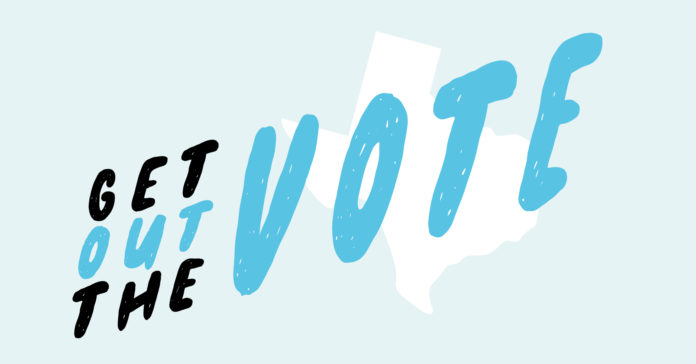 “Right now, more than 40 percent of Texans are under the age of 30, and the vast majority of them are young people of color. In 2020, young Texans must know their rights and know just how critical their voice really is,” Charlie Bonner, MOVE Texas’ Communications Manager, told Reform Austin.

“At MOVE Texas, we work to empower young voters with the information they need to vote by showing the connection between the issues that matter most to their everyday lives and the folks in elected office with the power to do something about it. By empowering young voters, we’re not just changing the results of one election. We’re creating life-long voters who will fundamentally change Texas.”

For many Texans in college, their time on campus could represent the first time they’ve been eligible to vote—assuming they’re registered and have access to the polls. Universities and student groups across the state take voter education and awareness seriously, implementing various strategies to “get out the vote” to students.

The University of Texas at Austin has a student organization called TX Votes that “invites students campuswide to increase electoral participation and create more voters and better citizens.” During election cycles and during off cycles, TX Votes stays active educating the UT community with activities, including “registration booths, deputization sessions, and campus competitions.”

Mike Rosen, the Associate Vice President of Strategic Communications at the University of Houston told Reform Austin, “UH has made it a priority to work with Harris County to become a polling location. It makes it convenient for our students, faculty and staff to vote, and also conveys to our UH community the importance of participating in our nation’s democracy.”

Texas A&M University has Aggie Vote, a non-partisan voter registration and education group on campus. Founded in 2018, the group reminds students to vote, gives out absentee ballot information and educates students about the candidates running in hopes to improve the voter turnout on campus and in Brazos county. Aggie Vote president Georgia Neal told Reform Austin, “We aim to educate students about how to use their right to vote and then register them to do so. From what we experience, it’s not that students don’t care enough to vote, it’s that they lack the tools.”

Micheal L. Gunn, the Director of Student Government Services at Texas Tech University, told Reform Austin, “We try to instill our students with a sole purpose of belief. Their voice is important and it should be heard in all matters. Also, the best way to realize their voice is to exercise the right to vote. Like most Student Governments we host voter drives and several members of our organization have been deputized by the Election Commission. We host debate watching events and will make information about the issues and platforms available in our office, so the students have an opportunity to cast an informed vote.”

The University of Texas in San Antonio has previously used the hashtag #RowdyVotes on social media to engage with their students.

Maria Alejandro the program director of the UTSA Center for Civic Engagement told Reform Austin, “The UTSA Center for Civic Engagement collaborates with campus and community partners to ensure we create opportunities for students to become voter deputy registrars and get registered to vote. We are kicking off #RowdyVotes with a voter deputy registrar session in late January and invite students to be part of creating an action plan for RowdyVotes2020. The CCE also works with faculty to integrate voter registration and education efforts as part of community engaged learning. For example, Gina Amatangelo, lecturer in the UTSA College of Public Policy, integrates a civic leadership academy where her students register high school students and conduct civic education sessions. In 2018, we hosted the Inside Out civic engagement photo booth, a “Scooter Ride to the Polls” with San Antonio Councilwoman Shirley Gonzalez at the UTSA Downtown Campus. UTSA’s civic engagement efforts were recognized by the All In Democracy Challenge in 2019 for increasing student voter turnout by over 40%.”

For those arriving on campus who haven’t registered, in Texas voters can register at least 30 days before election day.

When it comes to registering as a student, VoteTexas.gov states, “If you consider your parents’ address to be your permanent residence, you may use that address as your registration address. If you would like to register to vote at your college address, you may do so, but you can’t be registered in both places.”

For those not originally from Texas, “If you’re attending a college or university away from home, you can vote early by mail if you claimed as your primary residence the address where you live while not attending school – in other words, where a parent or guardian lives.”