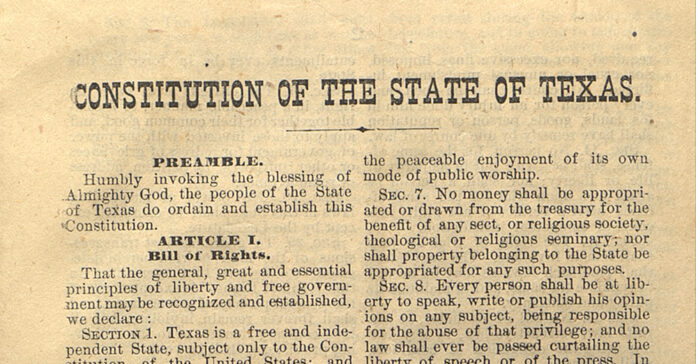 Next month, voters will have the opportunity to change the Texas Constitution. Eight propositions, approved by the state Legislature, will appear on Texas ballots this year. Constitutional amendments that receive a simple majority vote will be adopted.

Proposition order as they appear on the ballot is determined by a random draw, this year by Deputy Secretary of State, Joe Esparza. Election day is November 2, 2021. You can find information and resources about where to go to vote in VoteTexas.gov

Here’s what you should know about the proposed constitutional amendments before heading to your polling place this November:

What it means: This amendment would authorize professional sports team charitable organizations to conduct raffles at rodeo venues. The measure would amend section 47 of Article 3 of the state constitution.

What it says: “The constitutional amendment authorizing a county to finance the development or redevelopment of transportation or infrastructure in unproductive, underdeveloped, or blighted areas in the county.”

What it means: The amendment would authorize a county to issue bonds to fund infrastructure and transportation projects in undeveloped and blighted areas. It would also prohibit counties that issue bonds for such purposes from pledging more than 65% of the increase in ad valorem tax revenues to repay the bonds.

What it says: “The constitutional amendment to prohibit this state or a political subdivision of this state from prohibiting or limiting religious services of religious organizations.”

What it means:  Proposition 3 would amend Article 1 of the Texas constitution by adding a new section to prohibit the state or any political subdivision from enacting a law, rule, order, or proclamation that limits religious services or organizations. Arguments against this amendment cite COVID as one valid reason to suspend religious services, approving this proposition would prevent authorities from banning this type of events even during a worldwide pandemic.

What it says: “The constitutional amendment changing the eligibility requirements for a justice of the supreme court, a judge of the court of criminal appeals, a justice of a court of appeals, and a district judge.”

What it means: The amendment would change the eligibility requirements for the following judicial offices: a justice of the supreme court, a judge of the court of criminal appeals, a justice of a court of appeals, and a district judge.

New requirements would include:

What it says: “The constitutional amendment providing additional powers to the State Commission on Judicial Conduct with respect to candidates for judicial office.”

What it means: Proposition five authorizes the Texas State Commission on Judicial Conduct to accept and investigate complaints and reports against candidates running for state judicial office.

“There is an inherent unfairness in judicial elections when a candidate runs for judicial office against an incumbent because judges are subject to the Code of Judicial Conduct, but candidates are not. H.J.R. 165 would ensure that judicial elections are fair by granting the State Commission on Judicial Conduct the authority to enforce the same standards for judicial candidates that they do for sitting judges.” said Rep. Jacey Jetton (R), author of the amendment.

What it says: “The constitutional amendment establishing a right for residents of certain facilities to designate an essential caregiver for in-person visitation.”

What it means: The amendment would allow residents of nursing facilities, assisted living facilities, or state-supported living centers to designate an essential caregiver that may not be prohibited from visiting the resident, even during a pandemic.

What it says: “The constitutional amendment to allow the surviving spouse of a person who is disabled to receive a limitation on the school district ad valorem taxes on the spouse’s residence homestead if the spouse is 55 years of age or older at the time of the person’s death.”

Rep. Jake Ellzey (R) had this to say about the amendment, “The surviving spouse of a disabled homeowner should not be saddled with an unexpected large increase in their tax bill. That only magnifies the tragedy of the loss of their spouse and if they are on a fixed income it even further compounds their difficulties. If a couple has a disability exemption for their homestead, when the disabled person passes away, the surviving spouse loses the exemption. HJR125 protects the surviving spouse from the loss of an important benefit.”

What it says: “The constitutional amendment authorizing the legislature to provide for an exemption from ad valorem taxation of all or part of the market value of the residence homestead of the surviving spouse of a member of the armed services of the United States who is killed or fatally injured in the line of duty.”

What it means: Similar to proposition 7, this measure would amend the Texas Constitution to authorize a total residence homestead property tax exemption for a surviving spouse of a member of the armed services “who is killed or fatally injured in the line of duty.”

Currently, the constitution grants the exemption to the surviving spouse of a member of the armed services “who is killed in action.” The amended version would also include service members who were fatally injured during military training or other military duties.