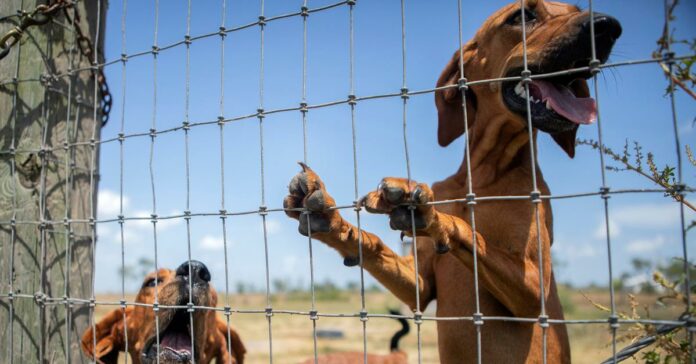 Texas law requires people to provide their dogs with adequate shelter from extreme weather. But when the Texas Humane Legislation Network in 2015 asked about 1,000 cities for a list of prosecutions under the law from the previous two years, not a single ticket got returned, according to executive director Shelby Bobosky.

Animal advocates say the lack of enforcement is the result of the flawed existing statute, which requires owners be given a 24 hours’ notice to correct any illegal treatment.

For the past six years, the nonprofit, which lobbies in support of animal rights, has pushed for legislation that would allow for more strict enforcement of the laws governing the proper tethering of dogs. The group thought it had succeeded in May when the Legislature approved such a measure. But Gov. Greg Abbott shocked many by vetoing the bill soon after.

This month, with the issue back on the governor’s agenda, lawmakers are pressing forward in hopes of achieving the goal once again. There’s little difference between Senate Bill 5, the bill introduced during the third special session, and the one Abbott vetoed in June. The new proposal, like its predecessor, would amend the health and safety code to make the unlawful restraint of a dog a criminal offense — and more clearly outline proper treatment.

In vetoing the original bill, Abbott said existing state laws already protected dogs by outlawing animal cruelty. Texas, he said at the time, is no place for “micro-managing” and “over-criminalization.”

The original bill “would compel every dog owner, on pain of criminal penalties, to monitor things like the tailoring of the dog’s collar, the time the dog spends in the bed of a truck, and the ratio of tether-to-dog length, as measured from the tip of the nose to the base of the tail,” Abbott said in his statement. The governor’s office did not respond to a request for comment for this story.

The Texas Humane Legislation Network was “shocked and disappointed” by the veto, Bobosky said, noting the bill’s bipartisan support. She added that the group owes the issue’s return this session to the Texans and legislators who voiced their opposition to the governor’s move. The new version has already passed in the Senate and will be considered in a hearing in the House on Tuesday.

“If there was no outcry … it would still be something that we’d be planning on working on next legislative session,” said Jamey Cantrell, president of the Texas Animal Control Association. “But collectively, the Texans that did come through and make their voices heard, they’re the ones who are really responsible for where we’re at right now.”

While Abbott previously said existing animal cruelty laws were sufficient, Cantrell emphasized that the current law regarding tethers is unenforceable.

The bill’s author, state Sen. Eddie Lucio Jr., D-Brownsville, said the changes were “minor” accommodations to the veto that “clean up the statute.”

“I’m just pleased that we were able to move the bill forward,” said Lucio, who has seven dogs. “I hope that this will give a lot of dogs a new way of life.”

Both versions ban the use of chains or heavy weights to restrain dogs. They both require that tethered dogs have access to shelter from certain weather. They both require that collars be made of “material specifically designed to be placed around the neck of a dog.” And both allow exceptions for activities like herding, shepherding, agricultural work and hunting.

But the new bill uses different language in certain sections, changes made “in coordination with the governor’s office” that “do not affect the purpose of the bill,” Bobosky said.

The new bill declines to specify which materials must make up the dog collar. It says shelters must protect dogs from “inclement weather,” which includes “rain, hail, sleet, snow, high winds, extreme low temperatures, or extreme high temperatures.” And it adds the word “reasonably” when describing the amount of time a dog could be left unattended in an open-air truck bed.

While the changes loosen the language around the collar’s tailoring and time spent in a truck bed, the new bill still requires the restraint be no shorter than five times the length of the dog.

The Texas Animal Control Association has been lobbying for this bill for several sessions, Cantrell said. He’s seen its ideas work in Plano, where he serves as the animal services manager. Before the city outlawed the use of tethers as permanent restraint, he said the issue arose “all the time,” with ill-fitting collars and heavy chains sometimes cutting into dogs’ skin.

Since 2014, the Texas Humane Legislation Network has heard from police officers, sheltering professionals and animal advocates — all saying the law needs fixing. After all that time, Bobosky said, the group is “cautiously optimistic” the bill will become law.

“We need to have some basic standards in place for dogs who permanently live outside, Bobosky said. “As we saw with the February storm, many dogs perished — which was totally unnecessary — because there is no definition of adequate shelter.”