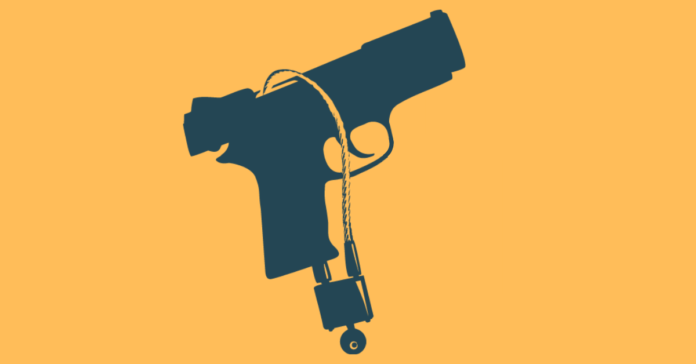 At first glance, Project Childsafe kits could be mistaken for a bike lock with a cable cord. But there’s an important distinction between the two: these kits are “intended to discourage unauthorized access to a firearm, particularly by young children.”

The cable cord in this case loops through the empty cylinder chamber of a firearm, which prevents the chamber from being loaded with bullets. Each gun lock comes with a set of instructions that describe how to use the gun lock depending on the firearm (pistols, revolvers, shotguns and rifles).

Though these safety kits have been distributed since 2003, the initiative for gun education and safety in Texas has picked up following several highly publicized mass shooting events in recent years. As Reform Austin shared earlier this month, “Despite making up only 8.77 percent of the United States population, Texans made up 12.13 percent of all mass shooting victims killed or injured in 2019.”

The Santa Fe High School shooting in 2018, which resulted in 10 killed and 13 injured, was carried out by a teenager using his father’s guns.

Gov. Greg Abbott responded to the tragedy by hosting three roundtable discussions, where he met with administrators, superintendents, advocates and law enforcement officials, along with families of the victims to discuss potential legislative changes to safety of Texas schools, including metal detectors outside schools and stronger mental health services.

Gov. Abbott announced a $1 million dollar grant to provide gun locks to Texans for free, and one year later they became available to the public.

Who is eligible for the gun locks?

Bill Brassard, the Senior Director of Communications at the National Shooting Sports Foundation told Reform Austin, “…the Project ChildSafe program provides free gun locks and a safety brochure to law enforcement agencies throughout Texas to be distributed to gun owners. We encourage Texas agencies to take full advantage of this gun safety program by requesting the locks at www.projectchlidsafe.org.”

Texas residents requesting gun locks should be able to do so through local law enforcement agencies and firearms safety advocacy groups, though a recent incident suggests gatekeeping might determine which groups or individuals receive the locks based on perceived political agendas.

What can gun locks prevent and how do they help?

Despite political differences that can sometimes shape gun safety policy in the state, the use of gun locks and safe storage is largely a bipartisan issue for Texas legislators.

Rep. Donna Howard (D-Austin), states on her website that during the 86th session she was pleased the legislature included her budget rider directing the Dept. of Public Safety (DPS) to spend $1 million to implement a safe storage public safety awareness campaign, stating, “With a significant number of Texas children accessing unstored firearms and causing harm to themselves or others, as well as the frequent use of unsecured firearms in suicides, we need to do what we can to encourage responsible ownership.”

Leesa Ross lost her college-aged son tragically to a handgun accident and is a board member of Texas Gun Sense, an apolitical organization devoted to gun safety for Texans of all ages. When asked about the difference a gun lock can make, considering families may also own a firearm safe, Ross told Reform Austin, “I lost my college-age son to a gun tragedy. Without a doubt, his death could have been prevented had there been a gun lock on the firearm. Something as simple as a cable gun lock would have saved his life.”

Ross has turned her grief into awareness about safe firearm storage. She told Reform Austin, “Ten years later, I educate parents, students, and young adults about the practices of gun safety. Gun locks are a big part of my Lock Arms for Life training program. I hand locks out at every event I do. A parent is primarily concerned about the safety of their kids, and that starts the moment they are born.

Among Texas children and youth, in 2019 there were 22 shootings involving children under 18 years old using an unsecured firearm. The Giffords Law Center to Prevent Gun Violence states that from 2013 to 2017, 3,137 people under age 25 were killed with a gun in Texas.
Everytown for Gun Safety (EverytownResearch.org) states, “In Texas, an average of 261 children and teens die by guns every year, and 54 percent of these deaths are homicide. In the US, 58 percent of all gun deaths among children and teens are homicides.”