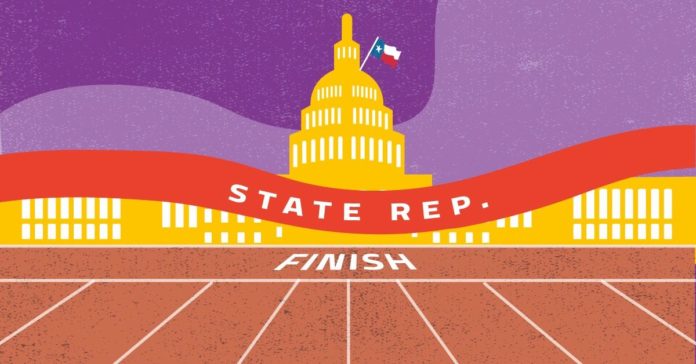 As Texans prepare for election season this year, they will be doing so in the wake of more competitive seats than is usual for the state.

The 2018 elections saw a shift in Texas’ partisan political landscape, and Democratic candidates are hoping they’ll see the same momentum in 2020. Meanwhile, Republicans in vulnerable districts hope to keep their seats and control of the Texas House of Representatives.

The upcoming March primary elections will pave the way for showdowns between candidates in the general election in November.

The following are the state House primary races with close odds:

Freshman representatives Erin Zweiner (D- Driftwood) and Vikki Goodwin (D- Austin) narrowly won their seats in the Texas House. Prior to 2018, both of their seats were held by Republican representatives and flipped with the Democratic wave brought on by an unusually competitive senate race.

In 2020, Republicans are anticipating a hard fought election to reclaim the seats they lost in 2018, which makes for competitive Republican primaries in House Districts 45 and 47, held by Zweiner and Goodwin respectively.

In House District 45, three Republican candidates are facing off for a shot to take back the district that, prior to Zweiner, remained firmly Republican in the previous eight years.

Two candidates, Carrie Isaac and Kent Wymore, are relatively evenly matched in the Republican primary. Their total financial donations and funds maintained mirror each other, making a runoff all but inevitable.

With the sheer number of Republican candidates crowding the race, a candidate receiving over 50 percent of the vote is a near impossibility. However, based on financial donations, these two candidates are likely to make it to the runoff: Don Zimmerman-former City Councilmember, and attorney Jenny Forgey.

Recent retirements in the Texas House have opened up a series of seats where a winning candidate could come from either political party. Two of the most competitive races among retiring candidates are from Reps. Dennis Bonnen (R-Angleton) and Rick Miller (R-Sugar Land) who both decided against running for re-election amid scandal.

With these seats open, the party primaries for Districts 25 and 26 include a number of candidates looking to fill the empty seats.

With the district expected to remain Republican, just one Democrat, Former Angelton Mayor and retired teacher Patrick Henry, is running. Before the general election has even begun, it will be a grueling race to the finish for the five Republican candidates in the primary.

With Republican Rep. Rick Miller announcing his retirement from the 26th House District, four Democratic hopefuls plan to take control of the seat. Included in the Democratic primary: consultant Rish Oberoi, State Board of Education Member Lawrence Allen, perennial candidate L. Sarah DeMerchant and physician Suleman Lalani. All are running in the hopes of an opportunity to flip the seat.

In addition to competitive open seats, there are some intra-party challenges to seated incumbents.

In Texas’ House Districts 142 and 59, seated Representatives Harold V. Dutton (D- Houston) and J.D. Sheffield (R- Gatesville) are both being largely outspent by challengers in their own party. While money in campaigns is necessary to be competitive, it does not guarantee success. However, for incumbent Reps. Dutton and Sheffield, it could mean uphill battles with their respective opponents.

Incumbent Rep. Harold V. Dutton will face one of his most challenging primaries in years as he runs against Houston City Councilmember, Jerry Davis. Davis, who raised nearly $140,000 since announcing his candidacy in early December, raised just under $113,000 more than incumbent Rep. Dutton.

In state House District 59, Rep. J.D. Scheffield will not claim victory easily. Local businessman  Cody Johnson is proving to be a challenger with deep pockets, having put upwards of $115,000 of his own funds into the race and spending over twice the amount of Rep. Sheffield.

After narrow victories in their previous elections, Reps. Matt Shaheen (R- Plano) and Jeff Leach (R- Plano) are facing strong competition in the primaries of their opposing parties.

In 2018, Matt Shaheen won the Texas 66 House District with less than two percent of the vote. Two Democratic candidates have joined the race with intentions of flipping the seat in the general election.

Previous Democratic candidate Sharon Hirsch has outraised neurologist Aimee Garza Lopez by $35,000 to $14,000. However, Lopez has loaned her campaign $116,000, giving her the greater monetary advantage in the race compared to Hirsch’s $41,000.

Similarly, Rep. Leach’s House District 67 is seeing a crowded Democratic primary race. After Rep. Leach won the seat with just over two percent of the vote, four Democratic candidates have come forward in an attempt to win the seat.

The race is now between Tom Adair, Rocio Gosewehr, Anthony Lo, and Lorenzo Sanchez, all hoping to flip the House seat following a win in the Democratic primaries.

Much of the election will come down to the upcoming March 3 primaries. Only then will the political battlefield be clear, and the real competition will begin.