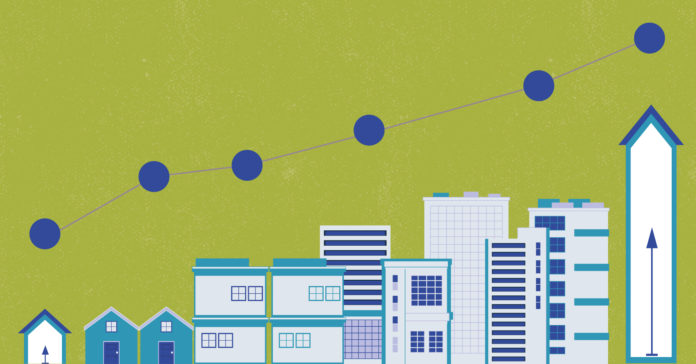 We’ve heard plenty about the rapidly escalating housing crisis in Austin, fueled by job growth in the local tech industry, and making headlines for battles between the city and the state over how to deal with homelessness. The truth is that the rising cost of living is affecting Texans statewide—particularly the younger generation.

Houston Properties, a subdivision of Keller Williams Realty, recently conducted a study of median home prices in 52 neighborhoods in the city. It concluded that salary requirements to buy a home in Houston increased 10 percent over last year. (This is based on a 20 percent down payment; some lenders offer lower down payments of 0 percent to 5 percent.)

The study also observed that less expensive neighborhoods to buy a home in Houston are located in areas with a history of flooding. While the cheaper prices may seem attractive for house hunters on small budgets, buying in a flood zone is not good for their long-term financial stability should natural disasters happen (and scientists predict they are likely to happen again, with potentially devastating effects).

There are always winners and losers in the housing market, especially when prices increase year after year.

“The beneficiaries of this appreciation have been current homeowners, which tend to skew to older demographics,” says Paige Martin, broker and team lead at Houston Properties. “For many millennials, who also are paying off student loans, this makes it harder for them to buy into well-established neighborhoods.”

She adds that nationwide, 40 percent of home buyers are millennials, which checks out with where members of the generation are in their lives right now: just getting established in their careers, perhaps starting to have children, and looking to settle down by buying a home. As Martin notes, however, many millennials are dragged down by significant student loan debt.

“We see more younger buyers renting than in prior generations,” says Martin.

It’s also true that wages have not appreciated at the same rate as housing costs, putting the younger generation at a significant disadvantage compared to their parents and grandparents. But it’s not just a generational gap. Martin says there has been growth in high-paying jobs in metro areas in Texas, which has led to a “bifurcation in the younger generation.”

Dual-income families, often with better education, in tech, finance, oil and gas, legal and medical fields have been able to reap the benefits of a vibrant housing market, buying homes and seeing investments pay off as they appreciate in value.

“On the other hand, single-income families and/or families who are not participating in the high wages from these industries have been forced to rent, look at ‘next gen homes’ or suffer through long commutes,” says Martin. (A “next gen” home is one where multiple generations of one family lives.)

Wage growth has been unequal throughout the state as well. A Texas Tribune investigation published last week analyzed data from Apartment List on a few Texas cities. Median rents from 2008 and 2018 increased significantly in San Antonio (16.5%), Houston (16.1%) and Dallas (18.7%), but San Antonio only saw a third of the increase in income that Houston or Dallas did.

“A lady that I talk to on the bus told me she had to move because of the rent increases,” San Antonio resident Barbie Hammond told the Texas Tribune. “And I told her, ‘Well, when Christmas time came, I got a note saying that the next month there will be a $60 increase in my apartment.'”

Lack of affordability doesn’t just hit big cities either. In Texas Monthly‘s new podcast “Boomtown,” which examines current life in the Permian Basin amid a historic oil boom, host Christian Wallace says housing costs in Odessa right now are even higher than in Austin. With so many people living in and moving to West Texas to make it big on the oil field, supply-and-demand economics have pushed costs way up.

This has ripple effects on other aspects of people’s lives. Staying on the Odessa example, Wallace notes that schools are getting increasingly crowded, and the area has found it difficult to attract and retain teachers. Who can afford sky-high housing prices on a teacher’s salary?

One word often used to describe the Texas housing crisis: sprawl. This is particularly true in the main metro areas—Austin, Houston and Dallas—where residents are getting priced out of central areas and are pushed farther out into exurbs and suburbs. In the search for affordability, people are met with increased transportation costs that can have a counter-effect, as a recent Texas Monthly article argues.

Like many other population centers nationwide, Texas has been a victim of its own success, and there’s little consensus from local and state legislators on how to fix the problem.