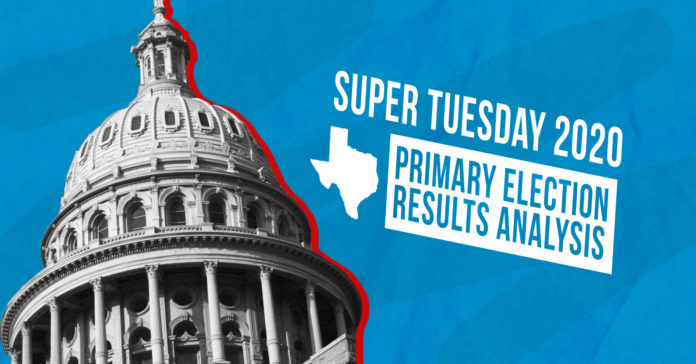 After nearly 2 million Texans voted on Super Tuesday and 2.1 million Texans early voted and sent ballots by mail, the unofficial results of the 2020 primaries are here.

For the Texas Legislature, there were 65 contested primaries in the House, 36 of them Democrats and 29 Republicans. Fifty-five of those primaries involve an incumbent challenged in their own party, including the three January special election winners. The other 10 primaries were in the eight open seats, five held by Republicans and three by Democrats.

Of the incumbents who went to a runoff, two were moderate Republicans challenged from far-right candidates and three were Democrats, two of whom were recently elected in special elections.

State Rep. Dan Flynn (R-Canton) of House District 2 is in a runoff with Bryan Slaton, in a 2018 rematch, after Flynn received 44.1 percent of the vote while Slaton received 35.2 percent. There was a third candidate, which ensured a runoff, Dwayne “Doc” Collins, who received 20.3 percent of the vote. Slaton had spent $163,000 in the first seven weeks of 2020 as compared to Flynn, who spent $117,000 over the same period as of the last campaign finance report.

House District 59’s State Rep.J.D. Sheffield (R-Gatesville) is in a runoff with attorney Shelby Slawson. Sheffield made the second runoff position with 30.4 percent of the vote while Slawson was ahead with 45.7 percent of the vote. Far-right candidate rancher Cody Johnson received 24.3 percent of the vote. Johnson self-funded his campaign to the tune of $1.7 million. This race was by far one of the most expensive House primaries this year with at least $1.4 million spent between the three candidates, according to Reform Austin’s analysis of the latest campaign finance reports.

Long time State Rep. Harold Dutton (D-Houston) faces a runoff against Houston City Councilman Jerry Davis. Dutton received 45.2 percent of the vote while Davis received 25.3 percent of the vote. This runoff was ensured by third candidate Natasha Ruiz, who received 20.5 percent of the vote. Interestingly, Ruiz may not have been a real candidate, ABC13 reports. When the reporter called the contact number on the state ethics commission filing form for the candidate, a Colorado driver who shared the name but did not know about the election answered. Dutton is considering legal action.

The other two Democratic incumbents who face a runoff are Lorraine Birabil of Dallas and Anna Eastman of Houston. Both faced nearly half a dozen challengers each in the primary, guaranteeing a runoff.

In the open seat race to replace Speaker Dennis Bonnen (R-Angleton), the Republican primary featured five candidates. Tax Assessor-Collector Ro’Vin Garrett is in the runoff with Bonnen-backed Angleton City Council member Cody Vasut after Garrett received 28.6 percent of the vote and Vasut received 22.2 percent. Not far behind was former Brazosport ISD Trustee Troy Brimage, who received 21.1 percent of the vote.

There was also a runoff in the Republican primary to replace Mike Lang in House District 60. Jon Francis, son-in-law of Empower Texans mega-donor and fracking millionaire Farris Wilks, is in a runoff with rancher Glenn Rogers. Francis received percent of the vote while Rogers received percent. The oil and gas finance director was largely bankrolled by his in-laws, who gave $650,000 to his campaign.

In the open seat left by State Rep. Roland Gutierrez (D-San Antonio), who is running for state Senate, there is a runoff between Democrats Liz Campos and Jennifer Ramos. Campos received 46.1 percent of the vote while Ramos received 43.7 percent. Third candidate Sean Villasana received 10.2 percent.

Three vulnerable districts, based on 2018 election results, have primary runoffs in the opposing party of the incumbent — Democrats Vikki Goodwin of Austin, Erin Zweiner of Driftwood and Republican Jeff Leach of Plano. Each had four or more candidates in the primary, guaranteeing a runoff.

In Travis County’s House District 47 Republican primary, which featured five candidates, General Counsel Jennifer Fleck and former Austin City Councilman Don Zimmerman are in a runoff. Fleck led with 32.2 percent of the vote while Zimmerman received 22.9 percent. Zimmerman made the runoff just one vote ahead of third place finisher police officer Justin Berry, which could lead to a recount.

In the upper chamber, there were six contested primaries, five of them among Democrats and one among Republican challengers to State Sen. Borris Miles in Senate District 13.

Three Democratic primaries in the Senate were challenging Republican incumbents while two were challenging Democratic incumbents, including State Sens. Borris Miles and Eddie Lucio Jr. Miles won outright but Lucio, who is facing his first serious challenge to since 1994, is in a runoff with Sara Stapeleton Barrera.

The only other runoff in the Senate came in the Democratic primary to challenge Pete Flores (R-Pleasanton) in Senate District 19. Flores won the seat in a September runoff special election.

Attorney Xochil Pena Rodriguez, daughter of former Congressman Ciro Rodriguez, is in a runoff with State Rep. Roland Gutierrez. Rodriguez received 43.8 percent of the vote while Gutierrez received 37.3 percent. The third candidate, attorney Alfredo Ramirez, received 18.9 percent of the vote. This is the second time Gutierrez is running for Senate District 19 after coming in third in a summer special election and missing the runoff between Flores and Democrat Pete Gallego.