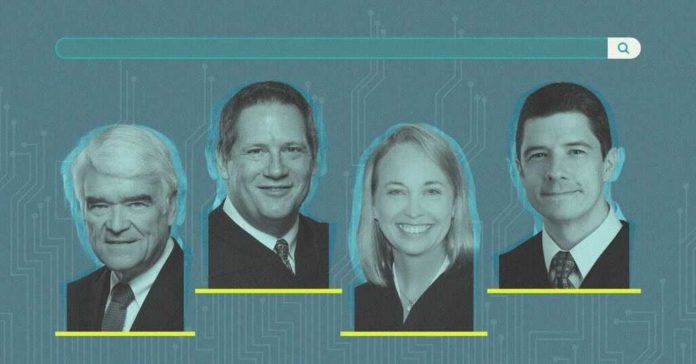 Are the opinions issued by the Texas Supreme Court for sale? Texas Democrats say yes as they take direct aim at the four Republican incumbents running for re-election to the state’s high court.

The Texas Democratic Party earlier this week launched Justice-for-Sale.com, a website dedicated to establishing links between how the Republican-controlled bench votes on cases and the campaign contributions the justices receive.

“Enough is enough. The Republican justices of the Texas Supreme Court have ruled in favor of their own interests and against Texans for too long,” said TDP spokesman Abhi Rahman.

A review of two decades of campaign finance reports for Chief Justice Nathan Hecht and justices Brett Busby, Jane Bland and Jeff Boyd by the Texas Signal, an online progressive media outlet, identified at least 734 contributions totaling more than $1.22 million to the four justices from nine law firms that routinely have cases before the court.

“All four of the justices received at least 100 contributions from attorneys at the firms, and none of the judges received less than $100,000 in total,” the Signal wrote in a story that was posted Monday. “The largest recipient was Chief Justice Nathan Hecht, who has received over 250 contributions totaling nearly $600,000 and also counts one of the firms as his former employer.”

Among Hecht’s donors are Locke Lord. The Houston law firm has given the chief justice more than $100,000. He has ruled in the firm’s favor 100% of the time, according to information displayed on the Justice for Sale website. Another Houston law firm the site links to Hecht is Baker Botts, with more than $69,000 in donations and a record of winning 89% of its cases before the court. Vinson and Elkins, also in Houston, is down for $130,000 to Hecht. It wins 50% of the time.

“Hecht’s approach to jurisprudence is donor-driven,” the website reads. “Hecht has taken millions of dollars from big defense firms and corporations. In return, Hecht sides with his contributors the vast majority of the time. Hecht’s donors get what they want, at the expense of everyone else. Under Hecht’s regime, justice is pay-to-win.”

Hecht was first elected to the court in 1988. He has won re-election every six years since. He faces opposition in November from Democratic challenger Judge Amy Clark Meachum, and Libertarian challenger Mark Ash.

When Texas became a state, judges were appointed by the governor and confirmed by the Senate, much like the current process of picking the U.S. Supreme Court judges. That all changed in 1876, when Texas started electing its judges.

Texas holds the title as the first state with a judicial race that exceeded $1 million. That happened in 1980. Since then, the cost of running for the bench has increased dramatically. With a total price tag of $12 million, the 1988 supreme court elections, Hecht’s first campaign, were the most expensive in Texas history.

In the period between 1992 and 1997, Hecht and the six other candidates who won seats on the Texas Supreme Court raised nearly $9.2 million dollars, according to an accounting compiled by the National Center for State Courts. The NCSC reports that more than 40% of that money was contributed by parties or lawyers with cases before the court or by contributors linked to those parties.

There have been discussions about reforming the system. A new commission met on the issue around the start of the year, but there has been nothing reported since then. In 2013, a commission formed to look into a change didn’t meet at all. The last time it was talked about before that was a decade earlier.

Texas remains just one of six states that elects all of its judges.

By far, Hecht is the biggest beneficiary of the monetary largess that is available from the deep-pocketed law firms that regularly have business before the court, but he is not alone.

According to Texans for Cash-Free Courts, many Texas Supreme Court judges came from the law firms that make the big donations and some go back to one of those firms when they leave the bench. This is the case with Justice Jane Bland, a former Vinson and Elkins lawyer, who has accepted $20,000 from her former employer, according to the Justice for Sale website.

Up until taking office in September of 2009, Bland was lead counsel on an employment law case in which she defended Apache Corp. against allegations of age discrimination.

Bland signed the petition for review in that case in late June. She assumed office on Sept. 4, according to information provided by TCFC. A year later, the attorneys for the plaintiff in the case alleged that Vinson & Elkins had “imperiled Davis’ federal and state constitutional rights with its campaign contributions to Hecht, Bland, Busby and Boyd, including the $20,000 to Bland,” according to information available from the Justice for Sale site and TCFC.

Judge Brett Busby is a former partner at Bracewell, and Justice Jeffrey Boyd is a product of Thompson and Knight in Austin, both of which are among the nine firms comprising 20% of all campaign donations to the judges.

In arguing for a return to appointing judges in Texas, TCFC points out that the average Texan who isn’t represented by any of the firms who help finance the campaigns of the justices stands a less than 10% chance of winning their case.

A return to appointing judges in Texas would require action by the state legislature to authorize a vote on an amendment to the Texas State Constitution. TCFC says that will take courage — “courage to let Texans decide for themselves. Courage to stop the scales of justice from continuing to tip in favor of big corporations. Courage to have our Supreme Court justices appointed on merit rather than elected by money.”