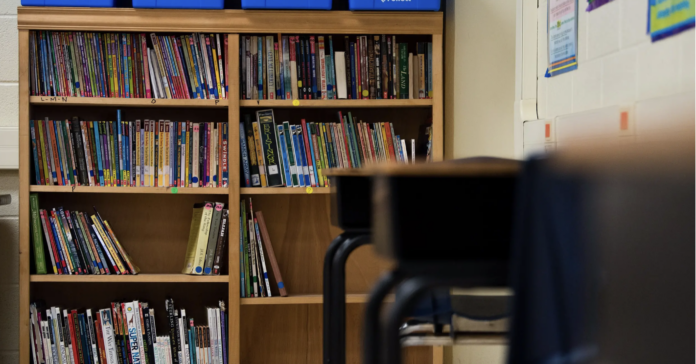 Teachers will not be forced to address students by the pronouns that match their gender identity even if a parent asks them to and transgender students will be barred from playing sports if two new policies targeting gender identity are approved Monday night by the Grapevine-Colleyville Independent School District board.

It’s the latest move by a school board to more formally exclude transgender youth in schools.

The Grapevine-Colleyville district, located between Dallas and Fort Worth, just added two members to its seven-member school board in May. Both received donations from the Christian cellphone company Patriot Mobile, which has targeted the defeat of any school board candidate who endorses what they call “critical race theory” and ones who support books about LGBTQ identities, saying that kids were exposed to “explicit, ‘woke’ books.”

None of the seven GCISD school board members immediately responded to a request for comment.

The pronoun measure before Grapeville-Colleyville ISD states that “the district will not promote, require, or encourage the use of titles or pronoun identifiers for students, teachers or any other persons in any manner that is inconsistent with the biological sex of such person” as listed on a person’s birth certificate.

And if a student, parent or legal guardian asks the teacher to address the student with pronouns that match their gender identity, the district policy — if approved — will leave it to the teacher’s “discretion” as to whether a teacher will do so.

The pronoun policy is one of several proposals under consideration involving how race and gender will be addressed in this school district. More than 150 parents and North Texas residents signed up to speak about the proposals before the board was expected to vote. As of 10:45 p.m. Monday, trustees had heard hours of feedback and had not yet voted on the proposed policies.

Mike Sexton, whose children attend schools in the district, told board members he opposed the proposal targeting LGBTQ students.

“You can talk about Santa Claus, but you can’t talk about gay people to fifth graders,” Sexton said. “This is incredible — you’re acting like people don’t exist. There’s thousands of people in this district that are LGBTQ, that live here, that are taxpayers.”

A separate proposal also would prohibit students from participating or competing in athletic events that are “designated for the biological sex opposite to the student’s biological sex.”

One woman, whose grandchildren attend schools in the district, spoke in favor of the sports policy Monday night.

“The policy on the agenda tonight that keeps girls competing against biological girls is very important to me,” the grandmother said. “I want to make sure that my granddaughters can enjoy the fruits and labor of my generation by participating in fair competitive sports.”

And a third proposal before the Grapevine-Colleyville board Monday night relates to incorporating Senate Bill 3, the state’s so-called “critical race theory” law into a districtwide policy.

This is seemingly the first school district to take this formal step. Since the bill was passed last year, there has been confusion about how the law should be applied. School administrators across the state have asked the Texas Education Agency for guidance on the law. The agency’s response is for school districts to just continue teaching the current social studies curriculum.

SB 3 was crafted to keep “critical race theory” out of schools, with restrictions on how to talk about slavery and eventually sending teachers to civics training. Critical race theory is the idea that racism is embedded in legal systems and not limited to individuals. It’s an academic discipline taught at the university level. But it has become a common phrase used by conservatives to include anything about race taught or discussed in public secondary schools.

The Grapevine-Colleyville board proposal states that teachers and administrators cannot discuss critical race theory or what they have called “systemic discrimination ideologies.” The board proposal, like the state law, would prohibit requiring students to read the New York Times’ Pulitzer Prize-winning 1619 Project, a collection of essays that centered on how slavery and the contributions of Black Americans shaped the United States.

The discussion of such policies comes almost a year after James Whitfield, a Black principal in the district, was put on leave and then eventually resigned after being accused of teaching “critical race theory.” In 2020, Whitfield emailed a letter to parents and staff in which he wrote that systemic racism is “alive and well” after the murder of George Floyd by a white police officer in Minneapolis.

Protect Texas Kids, a conservative nonprofit organization, is rallied support for the school board meeting, posting on Facebook that conservatives must come out as they expect Democrats to pack the meeting.

“They will be voting on great new conservative policies that will set precedent for other districts,” the organization posted.

The ACLU of Texas criticized the proposals, saying they would restrict education on the country’s history of racism and lessons that incorporate “social-emotional” learning.

“In order to thrive in a democratic society, students require an accurate and inclusive education so that they better understand the lives, cultures, and experiences of different people,” the organization said in a statement. “This includes learning about the history of and discussing race, gender, and systemic inequity.”

Jesus Vidales contributed to this story.

Disclosure: The New York Times and ACLU Texas have been financial supporters of The Texas Tribune, a nonprofit, nonpartisan news organization that is funded in part by donations from members, foundations and corporate sponsors. Financial supporters play no role in the Tribune’s journalism. Find a complete list of them here.