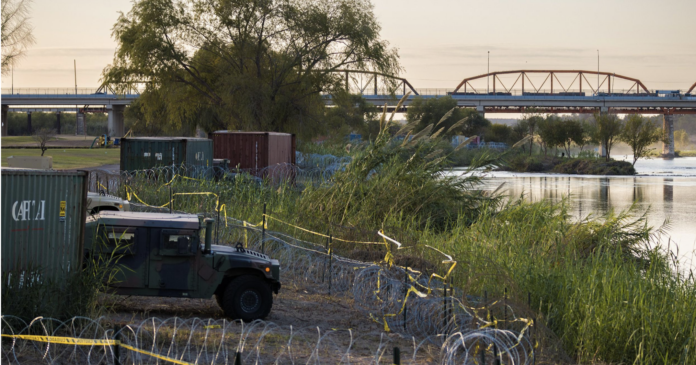 A service member assigned to the Texas National Guard’s border security mission, Operation Lone Star, died by a self-inflicted gunshot Tuesday morning in Eagle Pass, according to an official document obtained by Army Times and The Texas Tribune.

According to the document, the soldier shot himself with his duty weapon around 8:20 a.m.

Army Times and the Tribune are withholding the soldier’s identity until after their family is notified.

In a statement, Gov. Greg Abbott confirmed the soldier had died from a self-inflicted gunshot wound and asked Texans to pray for the soldier’s family.

“Cecilia and I are deeply saddened to hear of the tragic loss of a soldier with the Texas National Guard. Our hearts go out to the family and loved ones of the soldier,” he said in a statement. “Texas Rangers are leading the investigation, as the Texas National Guard and Texas Department of Public Safety coordinate with local law enforcement.”

He also pointed to mental health resources offered to military members by the Texas Military Department and the state’s human and health services agency.

The Texas Military Department did not immediately return a request for comment.

Beto O’Rourke, Abbott’s Democratic challenger who has been critical of Operation Lone Star, lamented the death on social media and decried the treatment of soldiers on the mission.

“I’m so sorry to hear that a tenth Texas National Guard member has lost their life while deployed under Operation Lone Star,” O’Rourke said. “My thoughts are with his family, community, and the members of the Guard who served all of us alongside him. They should never be used as political pawns.”

The soldier is also the 10th-known Texas Guard member linked to the mission to die since its rapid expansion began in September 2021.

The deaths began that month when four troops died by suicide in an eight-week span. The suicide cluster was subject of an Army Times investigation.

By February, two more had died in accidental shootings.

In April, then-Spc. Bishop Evans died when he tried to save two drowning migrants in Eagle Pass. Evans was not equipped with a flotation device due to the mission’s long-standing problems with purchasing and fielding critical equipment, a joint Army Times/Texas Tribune investigation found.

Then another soldier died of a blood clot after a long security shift in July amid a record heat wave.

The ninth death occurred July 16 when a soldier assigned to the mission died in a motorcycle accident in Laredo, according to an incident report obtained by Army Times and The Tribune.

When the first suicides linked to Operation Lone Star occurred last year, troops on the mission were struggling through pay problems and poor living conditions. Many were also dissatisfied with the large-scale involuntary activations that were required to meet Gov. Greg Abbott’s troop quotas, according to surveys of the mission’s troops obtained by Army Times and the Tribune.

Army Times and the Tribune documented these issues in a rolling investigation that dissected the hasty mobilization process, revealed how Guard leaders ignored the results of a feedback survey and highlighted the mission’s budget overruns.

Since the news organizations’ reporting, TMD has taken steps to address soldiers’ concerns and slowly reduced the number of troops on the border. Three of the department’s top leaders also abruptly stepped down in March and April.

For 24/7 mental health support in English or Spanish, call the Substance Abuse and Mental Health Services Administration’s free help line at 800-662-4357. You can also reach a trained crisis counselor through the Suicide and Crisis Lifeline by calling or texting 988.