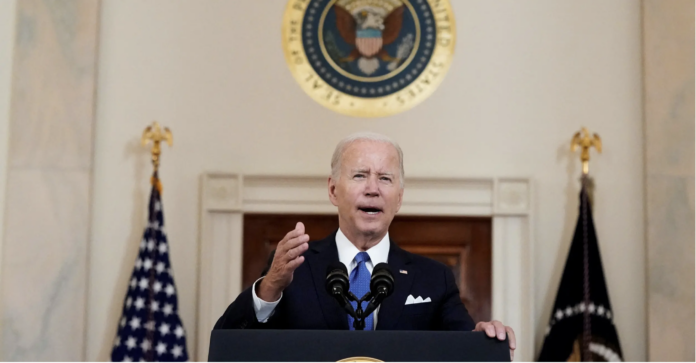 A’Naiya Vavis graduated from Texas State University four years ago with $14,000 in student loan debt, and her $180 monthly payment to the federal government meant living paycheck to paycheck on a $38,000-a-year public relations salary in Austin.

When her loan payment plan was paused during the pandemic, it allowed her enough breathing room to afford rising gas and food prices.

But on Wednesday, she found out her education bill is no more after President Joe Biden announced that the federal government will forgive $20,000 in student loan debt for borrowers who also received federal Pell Grants.

“I’m very stunned and shocked,” Vavis said Wednesday. “I didn’t expect to not have any student debt until at least my 30s just because of where I live and the high cost of living. Trying to budget for student loans has always been stressful. And now to have that off my plate is a big relief.”

“Extending higher levels of forgiveness to Pell recipients is a great addition to this plan,” said Aurora Harris, the Southern regional director for Young Invincibles, a national youth organization. “This especially helps Black students, [who] have the highest percentage of students, 72%, who receive Pell Grants. With this increased forgiveness, it is estimated that 20 million borrowers will have all of their remaining loan balance wiped out.”

In 2021, 56% of students who graduated from four-year public universities had approximately $25,000 in student debt, according to the Texas Higher Education Coordinating Board. Biden’s decision to forgive more money for low-income students who qualified for federal Pell Grants will especially impact low-income borrowers and people of color, who are more likely to qualify for federal financial aid and carry higher amounts of student loan debt.

According to a presentation by Texas higher education officials, in 2019, 81% of Black students who graduated with bachelor’s degrees in Texas had some kind of debt, compared with 52% of white graduates in Texas. And the average debt load for Black graduates was about $4,000 higher than for white graduates, hovering around $30,311.

There is a broad range of debt between borrowers, too. About 17% of Texas borrowers have student loan debt less than $5,000, according to the Education Data Initiative, an education data and research nonprofit. Less than 2% of borrowers owe more than $200,000.

This marks the first time in U.S. history that a president has issued a widespread forgiveness of student debt. The move has received criticism from both sides of the political spectrum. Democrats have argued Biden should forgive a larger amount of student debt while Republicans argue that forgiving debt will increase inflation and oppose any cancellation to high-income earners.

The Biden administration argues it has the legal authority to forgive student debt based on the Higher Education Relief Opportunities for Students Act of 2003, but higher education experts said there are likely to be lawsuits filed questioning the executive branch’s authority.

Biden also extended the COVID-19 pandemic pause on loan payments one more time, through the end of 2022. According to the White House, nearly 8 million borrowers will automatically receive relief based on data the U.S. Department of Education already has. The Biden administration says it will launch an application in the coming weeks so more people can provide their current income information and qualify for student loan debt forgiveness. The application will be open through the end of the calendar year.

For students who are carrying more debt than the cap announced Wednesday, there are mixed feelings.

Austin resident Kalyn Williams has around $60,000 in student debt from her undergraduate and graduate degrees, which she has been paying off through the federal income-based repayment plan. She owes approximately $10,000 more now because her monthly payments don’t cover the cost of interest that accrues on the loans. This move puts her right back to where she was when she finished her master’s degree a decade ago.

“I’m happy, but I also wish it had been more because everything that he campaigned on was, you know, forgiving loans for folks who had gone to public schools, which I did,” she said. “And so this is just kind of like, great, but not really what we were expecting.”

Williams has 13 months until she qualifies for public-service loan forgiveness, the program that forgives the remaining balance after 120 qualifying monthly payments.

As part of Wednesday’s announcement, Biden is also proposing changes to the income-repayment plan, including a reduction — from 10% to 5% — in the amount borrowers pay each month. The new plan would also forgive loan balances after 10 years of payments instead of the current 20 years for those who have a balance of $12,000 or less.

For Williams, it’s unclear how that change would impact her last year of student loan payments since her income has risen during the pandemic.

Stephanie Borden, who lives in Carrollton, has around $57,000 left to pay off on her student debt. She said she appreciates any help to cut down the debt and hopes the forgiveness will reduce her $400 monthly payment. She didn’t realize how much it impacted her life until she was able to pause the payments during the pandemic.

“Four hundred dollars is a lot of money and realizing not paying it, I don’t have to live paycheck to paycheck. I can afford to do this fun thing with my friend, I can afford this thing I need that I’ve been putting off for years,” she said.

That ability to relieve borrowers from such hefty monthly payments is one reason why experts and advocates believe much more should be done to address student debt broadly.

Dominique Baker, a researcher at Southern Methodist University who has studied student debt among Texas graduates, said regardless of today’s announcement, much more needs to be done to reform the student loan system and to better control the cost of college, as well as increase funding for public colleges and universities.

“You have to both redress the harm, and then reform so that the harm does not get repeated,” she said. “Debt cancellation is the redressing of the harm. And then we have to make sure that we’re reforming the systems so it doesn’t happen again.”

Vanessa Sansone, an assistant professor of higher education at the University of Texas at San Antonio, said it’s also time to take a harder look at who is qualifying for college in Texas and who completes a college degree.

“We can’t ignore the demographics of our underrepresented groups in higher education with Black and Latino Texans,” Sansone said.

A closer overall examination of the student loan crisis and how impacts vary among different groups could improve higher education access for all students, she said.

Harris, with Young Invincibles, said high interest rates on federal loans keep student debt looming even with payment plans. While the interest rates are paused now, federal student loan rates have been as high as 7.54%.

She urged the continuation of other initiatives designed to slow the increasing debt. Although income-driven repayment programs and public-service repayment plans are not perfect, they will continue to benefit those most affected by crushing debt.

Harris pointed to how governments, both at the federal and the state level, have not acted to keep tuition from ballooning again. “Invest more in students so they don’t have to take on as much debt,” Harris said.

Right now, for borrowers like Vavis in Austin, the announcement makes her feel like a weight has been lifted off her shoulders.

“It just makes me feel like me and my friends are finally gonna be able to adult,” she said. “And live in this world without having the student loans that we need to take out in order to be able to get a job in this economy kind of hanging over our heads.”

Disclosure: Southern Methodist University and the University of Texas at San Antonio have been financial supporters of The Texas Tribune, a nonprofit, nonpartisan news organization that is funded in part by donations from members, foundations and corporate sponsors. Financial supporters play no role in the Tribune’s journalism. Find a complete list of them here.