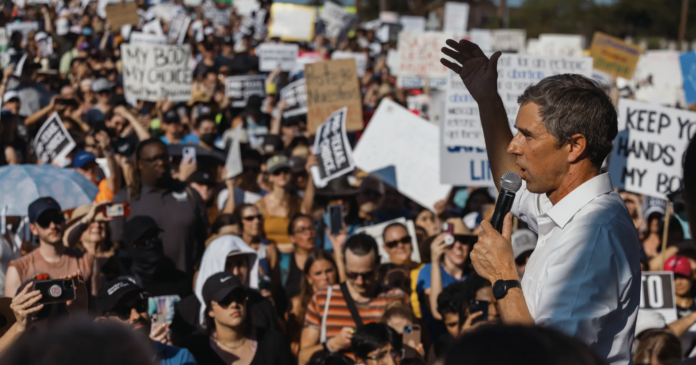 The Democratic nominee for governor is featuring the issue in his first general-election TV ads, which are airing during two preseason football games Thursday and Friday nights, according to his campaign. The commercials, which will also run digitally, will follow an O’Rourke news conference Thursday morning in Houston on Abbott’s “extreme abortion ban.” They also come as he tells supporters that it is the “most important thing” voters need to know about the Republican incumbent.

O’Rourke’s TV buy during the football games represents a small fraction of the kind of advertising that Abbott’s campaign has been doing on the air since last week, but the challenger’s campaign says it wants to reach the large audiences of the preseason games with a timely message.

One of the TV ads flashes the faces of women as they say that starting Thursday, “women all across Texas are no longer free to make decisions about our own body.” A second TV spot portrays a wife — a “lifelong Democrat” — and a husband — a “lifelong Republican” — agreeing that the abortion law goes too far.

“I mean, this is a free country,” says the husband, Trey Ramsey. “We need a governor who gets that — and that’s Beto.”

Other Democratic statewide candidates also capitalized on the trigger law going into effect Thursday. Mike Collier, who is running for lieutenant governor, and Rochelle Garza, who is running for attorney general, released a social media video urging voters to join them in fighting to restore abortion rights in Texas.

O’Rourke has campaigned relentlessly on the law’s lack of exceptions for women pregnant as a result of rape or incest, as well as polling that shows the law is very unpopular in Texas. The TV ads spotlight some of that polling, including an August survey that found 82% of voters support exceptions for rape or incest.

O’Rourke’s campaign said it is airing the commercials in seven markets during the Houston Texans preseason game Thursday night and the Dallas Cowboys preseason game Friday night. The campaign did not detail any plans to air TV ads beyond Friday.

Abbott’s campaign has been on TV since Tuesday of last week, airing a positive biographical spot in a buy that is consistent with a well-funded statewide campaign.

Neither campaign was lacking for cash as of the last fundraising reporting deadline — June 30 — when Abbott had $45.7 million cash on hand and O’Rourke had $24.9 million cash on hand. It costs well over $1 million a week to run a serious statewide TV ad campaign.

But the ads are part of an even more intense focus on the issue for O’Rourke as the trigger law goes into effect. The news conference in Houston, scheduled for 10 a.m. Thursday, will feature O’Rourke “alongside women and physicians who have been impacted by Abbott’s extreme and dangerous attacks on reproductive freedom,” according to O’Rourke’s campaign.

And in recent emails to supporters, O’Rourke has made clear he views Abbott’s abortion record a top issue, if not the No. 1 issue. One email Monday asked, “What are the most important things Texans need to know about Abbott?” and the response began with, “Greg Abbott signed the nation’s most extreme abortion bill into law with no exception for rape or incest, even though 82% of Texans reject his radical ban.”

Abbott has been relatively muted on abortion since the overturning of Roe v. Wade, more eager to talk about President Joe Biden and issues related to the economy and border. He eschewed some of the more celebratory rhetoric from fellow Republicans after the Supreme Court decision, saying in a statement that the court “correctly” reversed Roe v. Wade.

Nationally, the issue has complicated an election cycle that Republicans have long expected to go their way. Last month, voters in another red state, Kansas, soundly defeated a special referendum to override the state constitution and allow the Legislature to pursue new abortion restrictions. And on Tuesday night, Democrats won a bellwether special congressional election in New York where their candidate campaigned heavily on abortion rights.