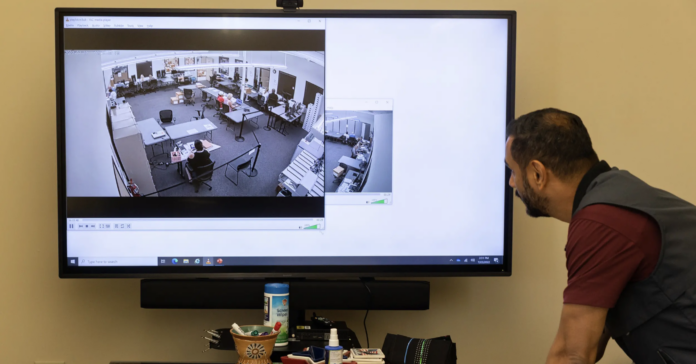 A rise in election-related misinformation has led to increased threats and intimidation of election workers in Texas and other states, according to a report released Thursday by a U.S. House committee.

A Texas elections administrator from Tarrant County told the committee there was a social media call to “hang him when convicted for fraud and let his lifeless body hang in public until maggots drip out of his mouth.” The official’s home address was leaked and he received messages threatening his children, including one that said “I think we should end your bloodline.”

That official, Heider Garcia, was the target of a smear campaign by allies of former President Donald Trump and prominent right-wing media personalities, purporting a falsehood that the 2020 presidential election was stolen from him due to widespread voter fraud. The claim of widespread voter fraud in the election has been repeatedly debunked, and several of Trump’s own aides have stated that the election was fair.

“To this day, not a single person or entity has been held accountable for the impact this whole situation had on my family and myself,” Garcia wrote in a letter to the Senate Judiciary Committee earlier this year.

The threats against the Texas official were one of many outlined in the report from the U.S. House Committee on Oversight and Reform, which analyzed intimidation against election workers in Texas, Arizona, Florida and Ohio. The report added that misinformation about the integrity of the 2020 election has been worsened by legislation pushed by Republican state legislators to bolster election security.

There have been more than 1,000 “hostile contacts” reported by election workers over the past year, and the American public’s faith in election integrity is decreasing. One in five election workers said in a survey earlier this year that they are likely to leave their posts before the 2024 election.

“For the past two years, election misinformation in the United States has often followed a feedback loop that produces more false information, heightens threats and pressures on election administrators, and increases the possibility of election subversion,” the report said. “The spread of misinformation about the 2020 election placed extraordinary pressure on election administrators, who are now besieged by coordinated campaigns of records requests and bad faith inquiries.”

Remi Garza, the president of the Texas Association of Elections Administrators, told the committee that debate in the state Legislature on changes to election law “frequently included broad generalizations of alleged fraud” and “repeated misleading information about actions taken by the Harris County clerk responsible for the November 2020 election.”

After the November 2020 election, an official in the Texas secretary of state’s office told lawmakers the election was “smooth and secure.” An audit of Texas’ top four largest counties’ 2020 election results also did not find evidence of widespread voter fraud.

Garza told the committee that elections officials in Texas continue to “face harassment, forensic audits, new civil and criminal penalties, threats, and unsubstantiated accusations of fraud” ahead of this year’s midterms.

The House report said the Texas Legislature required electronic voting machines to produce a paper record “without providing the necessary funds” for the changes.

The Republican Party of Texas earlier this year said protecting elections was one of its priorities for next year’s legislative session. The party wants to restore felony penalties for election code violations and reduce the amount of time allowed for early voting, among other proposed changes.

“The risk of subversion of future elections remains high. Local election officials are on the frontlines of this crisis,” the report said. “Now more than ever, they need the resources and support that only the federal government can provide. A federal whole-of-government response to this growing crisis is an urgent necessity.”

Disclosure: Texas Secretary of State has been a financial supporter of The Texas Tribune, a nonprofit, nonpartisan news organization that is funded in part by donations from members, foundations and corporate sponsors. Financial supporters play no role in the Tribune’s journalism. Find a complete list of them here.