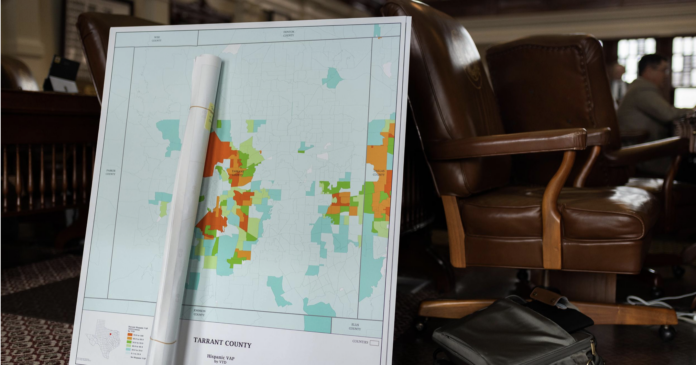 The legal fight over the shape of Texas political representation for the next decade won’t be decided until next year after a federal panel agreed Tuesday to delay a trial over new political maps.

The federal three-judge panel hearing the case pushed the start of the trial, which was originally scheduled for Sept. 28, following a flurry of disputes over discovery that left both the state and the various plaintiff groups questioning whether they’d have enough time to prepare to make their cases in a federal court in El Paso.

The court said it would announce a new trial at a later time.

The maps passed by the Legislature in 2021 have already gone into effect and are being used for the first time in this year’s elections, but the litigation could decide whether those maps need to be changed to ensure that voters of color have a fair say in choosing their representatives in elections for years to come.

The state faces a broad catalog of challenges to its four political maps, including its congressional and statehouse maps, that could affect a litany of districts. The legal claims, stemming from nearly a dozen consolidated lawsuits, include allegations of intentional discrimination, vote dilution and racial gerrymandering. The Republican-drawn maps largely serve to bolster the party’s dominance, giving white voters greater control of political districts throughout the state.

At issue in the delay were ongoing fights to compel Gov. Greg Abbott, the Texas attorney general’s office and other Republican elected officials to turn over thousands of documents that the state has been fighting to keep concealed. With less than a month until the scheduled start of the trial, the state and the plaintiffs groups were also jostling over various depositions in which state lawmakers relied on asserting legislative privilege to avoid divulging information on how the maps were drafted.

Redistricting cases are complex, with plaintiffs carrying the burden of proving wrongdoing by the state. The release of the disputed documents, the plaintiffs argued, could reveal new facts that could require additional depositions.

“Were the September 28 trial setting to hold, the Court could rule in advance of the upcoming legislative session. This would have been a clear benefit to all parties. But a ruling on only partial evidence does justice for none,” some of the plaintiffs wrote in a joint advisory filed with the court last week.

But the delay is not without risk.

In the joint advisory, several plaintiff groups noted a rescheduled trial would need to ensure enough time to possibly redo the maps for the 2024 elections. While some of the plaintiffs proposed trial dates in November, spring or early summer, the state argued the trial should be set for the summer following the next regular legislative session, which starts in January.

A trial next summer would mean the three-judge panel’s eventual ruling — which would likely not come until months after a weekslong trial — could still be appealed to the U.S. Supreme Court in 2023.

That would narrow the window between a potential ruling and the start of candidate filing for the 2024 elections in December of next year. It would also open the possibility for the state to assert what’s known as the Purcell principle, a legal standard regularly cited to ward off legal challenges that would require electoral changes too close to an election.

In the joint advisory, state attorneys said last week that they would be prepared for trial but noted that “effective trial preparation may be impossible” if the court required the state to devote “significant resources” to additional discovery.

The Republican-controlled Legislature redrew the challenged maps last year to adjust for the massive population growth captured in the 2020 census, which recorded that 95% of the state’s growth was among people of color.

Although Latinos accounted for nearly half of the state’s growth of 4 million residents, none of the new maps offer Latino voters new opportunities to turn their growing numbers into political power. Texas Republicans also elaborately manipulated district lines to create district boundaries that diminished the influence of voters of color in areas where they were gaining political ground.

And although white population growth in Texas is relatively stagnant, white voters will largely determine who fills the two new Congressional seats the state gained by virtue of its overall growth.