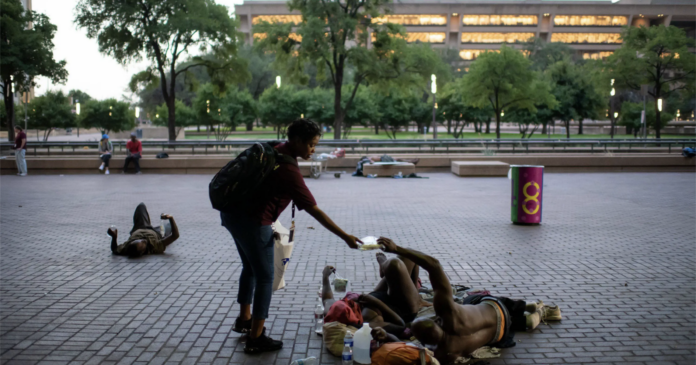 DALLAS — By 5:51 a.m. on a recent Thursday morning in downtown Dallas, it was 76 degrees and getting warmer outside, and Michelle Smith, the outreach and engagement program manager for a homeless recovery center, had already prepared a cooler full of ice-cold water bottles.

“The main issue is dehydration,” Smith said of the dangers of living outdoors during the summer.

The temperature that day would later climb past 100 degrees, another perilous day for Texans experiencing homelessness during a relentless span of extreme heat across the state. Such heat has made living on the streets even more dangerous than it usually is, people who are unhoused and advocates said. The cooling centers some local officials have set up are either difficult for people experiencing homelessness to access — or closed during some of the hottest parts of the day.

Smith jumped in a van loaded with the cooler and some hygiene kits. She worried about the people with heart problems and other health conditions this time of year, she said. By 6 a.m., when several people who slept outside a downtown library woke up and the outside temperature pushed toward 80 degrees, Smith was ready to greet them with cold water bottles and an offer to ride back to The Bridge, the homeless recovery center and shelter where she works.

The heat is a deadly threat: In the last decade, 45 people have died on average each year in Texas directly from exposure to the heat, according to Texas Department of State Health Services data. Data between 2020 and 2022 is not yet finalized, but early numbers suggest at least 10 people in Texas had already died from the heat this summer as of June.

Neither state death data nor local emergency call data shows how many people were experiencing homelessness at the time of their death or health emergency, but studies in other states have found that people without housing are at a higher risk of death and illness from the heat than other populations.

April through June was Texas’ warmest such period on record, according to a monthly national climate report from the National Oceanic and Atmospheric Administration. And relief isn’t expected any time soon for the South Central U.S., according to the National Weather Service prediction center. Climate change has enhanced the heat, pushing average temperatures higher in Texas, making heat waves and droughts worse, and offering less relief at night as minimum temperatures, in particular, have risen rapidly, scientists have found.

“It really does take a toll out here,” said Jathan Jenkins, a 30-year-old Dallas resident who does not have housing. “I can feel it in my chest, and I never experienced that before [experiencing homelessness].”

“The heat drains me more,” he added. That’s taken a toll on the relationships among the unhoused. Exhausted, everyone is a bit short-tempered, he said.

Homeless recovery centers and shelters have noticed an increase in demand for services, shelter employees told The Texas Tribune, especially during the day when temperatures typically climb into the triple digits across the state.

Cities have promoted air-conditioned public facilities such as libraries and community centers as places where people can get out of the sun. But officials and workers in Dallas, Houston, Austin and San Antonio said only a handful of people use the so-called cooling centers on any given day. Many close in the late afternoon — often when temperatures are their peak — and shutter over the weekend. Those who are unhoused say the centers aren’t open long enough or that they are too far away to access the service.

Jenkins said it’s difficult to find cool places to go during the weekends. Sometimes he and his partner go to the library or a shelter like The Bridge. He said it would help if city facilities extended hours to nights and weekends, and if there were more public places to access running water, such as water fountains. (Some were shut off during the pandemic, Jenkins said.)

When they’re out of options, they go inside air-conditioned businesses, but shop owners are sometimes rude and the experience leaves them feeling humiliated.

At Dallas-area shelters, the situation is increasingly dire. At The Bridge, more than 500 people used its daytime services on a single day last week, employees said, versus the more typical 300 people per day. It was the most since before the COVID-19 pandemic began. Smith, the outreach specialist at The Bridge, attributes the increased demand to the heat.

And at night, workers had to make more space to shelter the unhoused seeking to escape the heat that now lingers long after the sun goes down, said CEO David Woody. The extreme weather — combined with inflation and higher housing prices — has pushed the shelter to capacity. One night in mid-June, between 30 and 40 people had to be turned away, Woody said.

“It was just devastating,” Woody said.

More people are opting to seek shelter because of the excessive heat, he said, but “we don’t have the space to respond.”

On Sunday afternoon in Austin, as temperatures rose above 100 degrees, Antony Jackson biked through a homeless encampment in East Austin, where dozens of people live in tents and lean-tos among the trees.

Typically, people wave and emerge from their tents for the weekly aid Jackson provides with his wife, Kendra Jackson, through their nonprofit “We Can Now.” But this month, fewer people have made the short walk to where Jackson sets up.

“As we approached tents, multiple people did not look like they were in good shape,” he said.

Sometimes, all people can muster is a head nod in his direction. When Jackson offers to call emergency services to help, the response is usually the same: “No, it’s just hot.”

The group hands out gallon jugs of water, portable fans and cold Gatorade. Trees provide some protection from the sun, but the encampment is far from downtown, making it more difficult to provide people with needed services.

“It’s not just about going to an encampment [that] you can access on the sidewalk — it’s now an emergency rescue,” Mollica said. “Not only is that a more expensive intervention to the taxpayer, it’s also much more dangerous to people involved and for the person having a medical emergency.”

Capt. Darren Noak at Austin-Travis County EMS said the agency does not track how many heat-related calls it gets to homeless encampments.

Several Texas cities have opened city facilities as cooling centers where people can get out of the sun and cool off. Most are open Monday through Friday and close in the early evenings and on weekends. Many do not allow pets. The centers see little use, local officials across the state said.

Left: Mattresses are stacked against the wall for people staying at The Bridge. Right: Tori relaxes inside the air-conditioned kennel at The Bridge. Credit: Emil Lippe at The Texas Tribune

When temperatures reached 105 degrees in San Antonio on a weekend earlier this month, 45 people used one of the 53 city-operated cooling centers, city spokesperson Cleo Garcia said. While the city’s homeless outreach team noted an increase in the number of people asking to be transported to shelters amid the heat wave, some don’t go to shelters or cooling centers because they don’t want to leave all of their belongings behind, Garcia said. She added that some of their belongings can be brought to the facilities.

At the Acres Homes Multi-Service Center in north Houston, Renata Chambers, a customer service representative at the community center, said an average of three or four people come in every day to cool down, usually construction workers or others working outdoors. But with only two workers on staff at the community center, Chambers said a large increase of people using the cooling center could potentially overwhelm the staff.

In Corpus Christi, Emergency Management Coordinator Billy Delgado said while few people use the facilities, it doesn’t matter: If they can serve just five people, he said, that’s five people who potentially didn’t have a heat-related emergency that day.

“You want to make sure everybody can get out of the environment that they need to,” Delgado said.

After the National Weather Service issued an extreme heat advisory in the Corpus Christi area that lasted until 8 p.m. last week, the city extended the hours of its cooling centers, which are city libraries and senior centers. They were directed to close at 7 p.m. instead of 6 p.m.

Delgado, who has been the emergency management coordinator for 12 years, said he has never seen an extreme heat advisory last that late into the evening.

Meanwhile, cities have continued clearing encampments, a controversial practice, especially in the summer. In Dallas on Friday, city officers attempted to clear a camp on Coombs Street underneath Interstate 45 in South Dallas but were stopped by protesters, a few armed with assault rifles. Officials left, promising to return at noon. Activists helped residents pack up their tents and belongings.

When sweeps happen, some people are moved to temporary shelters, but when those are not available, people end up moving to new encampments or head farther from the city center.

Dallas spokesperson Jennifer Brown said the city arranged transportation and space at cooling centers for the encampment’s residents, and that city workers visit the camp a few times a week to connect residents with social services. Of the sweeps, she said, “The cleanings are conducted as necessary.”

Sonja Jones-Adams, 50, had lived at an encampment on Parnell Street in Dallas for about a year before the city cleared it. She relocated to the encampment on Coombs Street about a mile away. There, she set up her tent underneath a tree just out from under the freeway — not protected from the elements, but still in the shade. She was there less than a week when the city swept it on Friday.

“We’ve been moving around quite a bit,” Jones-Adams said.

That morning, advocates and others in the camp worked to relocate everyone’s belongings out from under the bridge, or else they would be thrown out by the city. By 1:30 p.m. Friday, Jones-Adams’ tent was pitched in a nearby patch of grass with no shade as temperatures reached 103 degrees.

She sat just under the freeway at the edge of the shade, watching the encampment clearing. Somewhere, she had a battery-powered fan, but it didn’t work anyway. Making her way to one of the city-operated cooling centers during the day and then back to her tent to sleep was probably out of the question given that she uses a walker, she said.

“There’s nowhere else for me to go,” Jones-Adams said.

Lucy Tompkins is reporting for The Texas Tribune as a fellow with The New York Times Headway Initiative, which examines the world’s challenges through the lens of progress. The initiative is is funded through grants from the Ford Foundation, the William and Flora Hewlett Foundation, and the Stavros Niarchos Foundation, with Rockefeller Philanthropy Advisors serving as a fiscal sponsor.