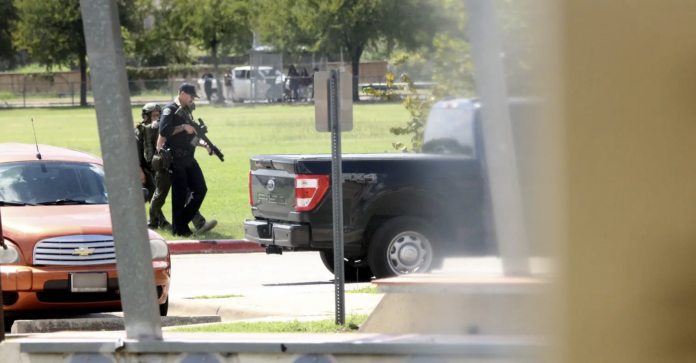 When Jefferson High School on the west side of San Antonio went on lockdown in response to a reported shooting on campus, parents rushed to the school to collect their children. The scene dissolved as parents and police shouted over each other, with families frantically trying to locate their loved ones as police worked to sweep the campus.

Though the threat was unfounded, the chaos revealed the anxiety Texas families have lived with since the new school year began in August, with the memory of the Uvalde shooting on May 24 still fresh in the minds of Texans.

The botched law enforcement response to the deadliest school shooting in Texas’ history has raised concerns about school safety and brought increased scrutiny to how police respond to active-shooter threats. The scene outside Jefferson was a reminder of the tension between law enforcement’s need to respond to an active-shooting threat while effectively communicating with stressed parents.

This year has seen a significant number of hoax calls across the country. In the three weeks between mid-September and early October, according to an NPR analysis, local news reports documented 113 false calls across the country. Experts say this increase isn’t surprising given that most school shootings inspire copycats to call in false reports of shootings to law enforcement.

The source of these fake threats remains largely unknown. Law enforcement said some originated from local agitators, while others appeared to come from as far away as Ethiopia, NPR reported.

Regardless of the source, Texas law enforcement agencies say all threats are treated as credible until an investigation proves otherwise. But before threats are deemed hoaxes, law enforcement and parents must grapple with the very real fear that another mass shooting could be underway.

The families with children at Robb Elementary School, where a gunman killed 19 children and two teachers, also clashed with police outside the building on the day of the tragedy. Law enforcement took over an hour to confront the shooter, despite the fact that some officers knew children were calling 911 from the classrooms. Police outside the building prevented parents from entering the school, even putting some parents in handcuffs.

Prior to the shooting in Uvalde, the chaotic scene outside of Jefferson High School last month wasn’t the norm, said Deputy Chief David Hightower with the San Antonio Police Department.

“Now we see an increase in parents wanting to sort of take matters into their own hands in order to retrieve their children,” Hightower said.

He said the protocols for responding to active-shooter threats have not changed since the Uvalde shooting, but the heightened anxiety of parents and officers reflects the trauma still resonating across Texas. As a result of elevated fears, Hightower said there have been more officers assigned to communicating with parents.

One of the most recent examples of false active shooter threats in Texas was on Monday, when there was a false active-shooter call at Central Catholic High School in San Antonio. Police evacuated the roughly 500 students from the campus in response. After the lockdown was lifted, school officials said they would make counseling available for its students.

“Events like this shake everyone to the core,” said Kathy Martinez-Prather, the director of the Texas School Safety Center at Texas State University. “It is definitely a situation that is at the top of mind of parents right now.”

Martinez-Prather added students are sharing in the anxiety, which she sees as an opportunity to teach schools about how to remain vigilant. Communicating with teachers and students about how to identify potential threats or concerning behavior is one area Martinez-Prather said schools can target to improve school safety. She also pointed to a guide for parents that details key components of school safety as another communication tool.

A spike of false active-shooting calls following a mass casualty event, like what occurred in Uvalde, is common, Martinez-Prather explained. She described it as a “contagion effect.”

She said these false calls activate critical resources that may require a response from surrounding jurisdictions and could cause a gap in first-responder resources. Another, perhaps unintended, consequence is a disruption of the school day that leads to a loss of learning for students and creates fears about school safety.

As the chief of police for the Jacksonville school district in East Texas, Bill Avera said he doesn’t anticipate these false calls would place an undue burden on his small force that serves a district of less than 5,000 students.

That’s in part because these incidents would receive the support of outside agencies, often from the Federal Bureau of Investigation, who often take the lead on investigating the origin of the false calls. Avera said his agency has received tips regarding some concerning behavior of students but the district hasn’t been the target of any fake active-shooter calls.

Avera also serves as a board member of the Texas School Safety Center in San Marcos, which puts him in contact with other school-based police departments, and he said he hasn’t heard of other agencies whose resources have been stretched to the limit by hoax calls.

“We may have dealt with the same issue 20 times, but we’re never going to say, ‘Oh, well, that’s Johnny and we know how he is,’ because when you do that, you’ve just painted yourself into a corner and all of a sudden you’ve lost your objectivity and your ability to respond to the issue,” Avera said.