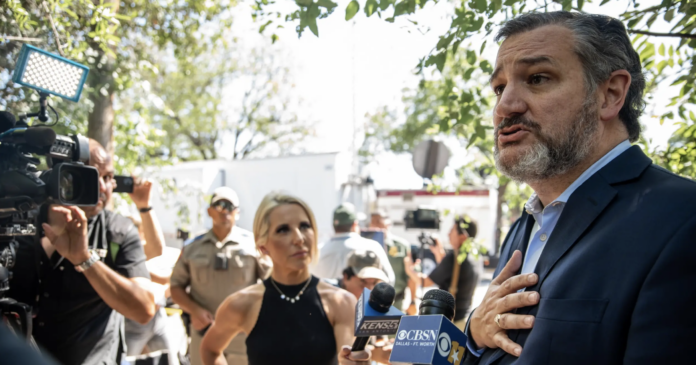 The parents of a child who was killed in the Uvalde school shooting met with Republican U.S. Sen. Ted Cruz, R-Texas, on Wednesday and asked him to support a federal ban on semi-automatic weapons.

The senator declined and instead suggested increasing law enforcement presence on school campuses.

Kimberly Mata-Rubio, whose daughter Lexi was killed in the shooting, recounted the meetingto The Texas Tribune and onTwitter on Wednesday afternoon. Felix Rubio, Lexi’s father, presented Cruz a picture of his daughter “in her child-size casket” while asking for a federal semi-automaticweapon ban, Mata-Rubio wrote. A total of 19 students and two teachers were killed in the massacre — the worst school shooting in Texas history.

Mata-Rubio said she didn’t expect Cruz to support gun control legislation before meeting with him and she didn’t think the Texas senator would change his mind.

“We had the meeting because I wanted to hear what he had to say. I wanted him to say it to my face,” Mata-Rubio said.

Mata-Rubio said the meeting with the junior Texas senator couldn’t have lasted more than five minutes, during which Cruz offered his alternative plan to improve school safety: more funding for school resource officers and mental health professionals. But she said her husband, Rubio, explained that more law enforcement officers in schools doesn’t guarantee students will be protected, pointing to the 2018 shooting in Parkland, Florida, where a school resource officer was on the scene when the shooter arrived and killed 17 people.

The police response to the shooting at Uvalde’s Robb Elementary has been heavily criticized. Hundreds of law enforcement officers descended on the school. But responders waited more than an hour to confront the gunman, which contradicts law enforcement doctrine that directs officers to immediately confront active shooters.

The meeting with Cruz was one of several conversations Mata-Rubio and Rubio had with political leaders on Wednesday. They were joined by family members of victims of other school shootings. The meetings were organized by the Newtown Action Alliance Foundation, a gun violence advocacy group. In addition to the meeting with Cruz, Mata-Rubio spoke with representatives of other Republican senators about gun control legislation, including the offices of Sen. Charles E. Grassley, R-Iowa, and Sen. Bill Cassidy, R-La.

“While they obviously, probably don’t support the bill, they just had more questions and were more sympathetic than our meeting with Ted Cruz,” Mata-Rubio said. “That was really disheartening because this is our representative.”

Mata-Rubio and Rubio testified before the House Oversight Committee in June during a hearing on gun violence, where Mata-Rubio called for a ban on semi-automatic rifles, raising the minimum purchasing age, “red flag” laws, stronger background checks and an end to gun manufacturers’ liability immunity.

Mata-Rubio is a journalist for the Uvalde Leader-News, and Rubio is a patrol deputy with the Uvalde County Sheriff’s Office.

Cruz’s initial response to the shooting got immediate blowback, with critics calling his prayers empty without substantive gun legislation to match.

Along with Sen. John Barrasso, R-Wyo., Cruz introduced a bill to increase funding for school resource officers and mental health professionals in schools to secure against shootings, but Democrats blocked the bill from heading to a vote, criticizing legislation that beefs up school security without effective gun control. He also voted against a landmark gun safety law authored by his Texas colleague Sen. John Cornyn in response to the Uvalde shooting.

“Today, Sen. Cruz met with [Rubio and Mata-Rubio]and he saw firsthand the pain and grief that the unspeakable violence at Robb Elementary school caused,” a spokesperson for Cruz wrote. “After meeting with them, Sen. Cruz went to the Senate floor to fight for his school safety legislation. Unfortunately, Senate Democrats blocked it with no explanation of why they don’t support doubling the number of police officers in schools, hiring 15,000 school-based mental health professionals, and increasing the physical security for children in schools.”

In speaking to elected officials in Washington, surrounded by survivors of other mass shootings, Mata-Rubio said she believed there is sufficient momentum to achieve actionable gun control. Cornyn’s gun safety law, passed one month after the shooting at her daughter’s elementary school, was the first major legislation on gun safety since 1994.

“There’s lives at stake. It’s too late for us, but we’re fighting for other families, for other children,” Mata-Rubio said.