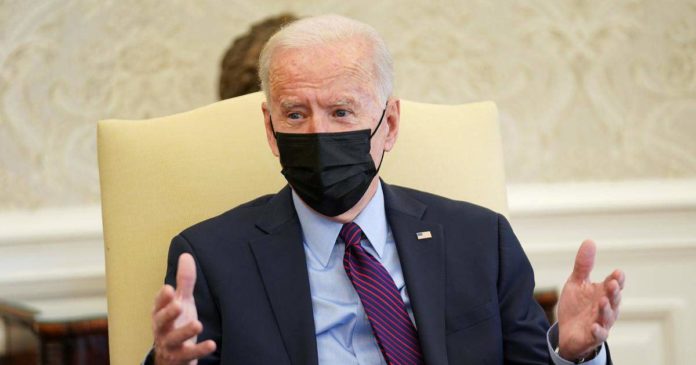 The comments by the Democratic president came a day after Republican Gov. Greg Abbott announced he was not only ending the mask requirement but also allowing businesses to reopen at full capacity. A small fraction of Texans have been fully vaccinated, and while coronavirus numbers have been generally declining in the state, they remain substantial.

“Texas — I think it’s a big mistake,” Biden said at the White House. “We are on the cusp of being able to fundamentally change the nature of this disease because the way in which are are able to get vaccines in people’s arms. The last thing — the last thing — we need is Neanderthal thinking in the meantime.”

Biden’s administration has urged states not to let up on restrictions as vaccinations pick up. Rochelle Walensky, Biden’s director of the Centers for Disease Control and Prevention, reiterated that earlier Wednesday during a White House coronavirus briefing when asked about Abbott’s announcement.

“I think we at the CDC have been very clear that now is not the time to release all restrictions,” Walensky said.

Asked about the Texas news a short time later, White House press secretary Jen Psaki did not directly address Abbott’s actions but said “the entire country has paid the price for political leaders who ignored the science when it comes to the pandemic.”

Abbott’s announcement came four days after he joined Biden for a tour of Houston that was partly about the state’s vaccination efforts. In remarks at the end of the trip, Biden stressed it was “not the time to relax” practices to curb the spread of the virus.

“We have to keep washing our hands, staying socially distanced,” Biden said. “And for God’s sake, wear your mask.”

But while federal leaders denounced Abbott’s actions, Dr. John Hellerstedt, commissioner of the Texas Department of State Health Services, told a panel of state House members Wednesday afternoon that he and Abbott were on the same page about COVID-19 prevention recommendations. Hellerstedt said the governor did not lift restrictions in an attempt to diminish safety.

“I think the difference is, should you wear a mask? The answer is absolutely yes,” Hellerstedt told the House Public Health Committee. “Does the governor want folks to wear a mask and to take their own personal responsibility to do it? The answer I believe is yes.”

Hellerstedt was also asked whether Abbott consulted with him before Tuesday’s action. The commissioner said that he spoke with the governor’s team beforehand, but the governor himself did not have a conversation with Hellerstedt ahead of the announcement.