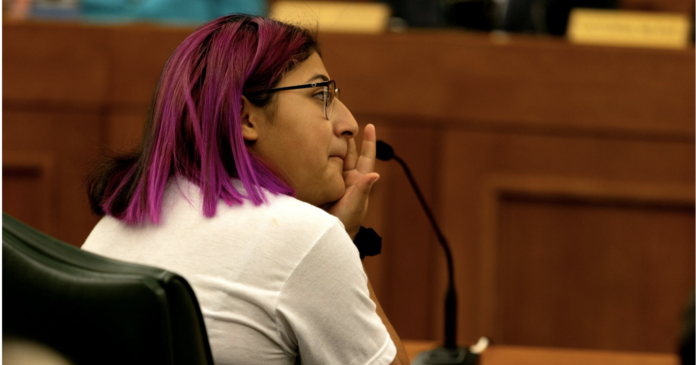 With her voice shaking as she delivered testimony to lawmakers, Jazmin Cazares, the sister of Jackie Cazares, who was slain during a mass shooting last month at Robb Elementary in Uvalde, called for tighter background checks, red flag laws and for lawmakers to “do something” to prevent future mass shootings.

“This morning around 5:30 a.m. I sat on my sister’s bed and I cried, I cried and I cried,” she said. “[Then] I wiped my tears, got in my car and drove four hours to get here. I shouldn’t have to be here right now. I should be at home watching a movie with my sister — it’s summer.”

Cazares told lawmakers she was testifying in honor of her sister Jackie and her cousin Annabell Rodriguez, who was also killed by a gunman who took the lives of 19 children and two teachers. She called Jackie “one of the sweetest souls anyone will ever meet” and said her family was still in shock as they continue to learn details of the shooting, saying there are signs the gunman could have been stopped before he committed the massacre at the school.

“I’m here begging for you guys to do something,” Cazares said. “I’m here to honor Jackie, her friends, their families, my family and my community. You can honor them, too, by passing gun safety legislation.”

Cazares was among a small group of people that sat in the front row of the committee room wearing shirts memorializing the victims of the Uvalde shooting. The meeting is the first joint hearing by the House committees on Homeland Security and Public Safety and Youth Health and Safety, which have been tasked with making recommendations for action the Legislature can take to address mass shootings.

Cazares said she has one year left of high school but is unsure whether she’ll return to school next year.

“I’m terrified for my life to go back,” she said. “I have senior year and that’s it. Am I going to survive it? It’s unbelievable. Absolutely unbelievable.”

Cazares said lawmakers should come together to pass red flag laws, which would allow local officials to take someone’s guns away if a judge declares them to be a danger, and said they could save lives. She also called for stricter background checks for gun sales.

“Background checks are needed to protect innocent communities like mine from being in danger by people who are unstable and signal that they are threats,” she said.

Cazares’ testimony was followed by that of shooting survivor and former state lawmaker Suzanna Hupp, who advocated against stricter background checks and other gun safety legislation. Hupp, whose parents were slain in a 1991 shooting at Luby’s cafeteria after she left her gun in her car for fear of losing her gun license, also pushed for the state to “end gun-free zones.”

Hupp became a gun rights advocate after the shooting that killed her parents and helped push for Texas to allow people to legally carry concealed weapons. She also served in the Legislature and continues to push for access to guns.

A group representing the Texas Police Chiefs Association told lawmakers they supported strengthening background checks for gun purchases and legislation that would raise the age for buying an assault rifle from 18 to 21.

“We believe in reasonable changes which include raising the age to 21 for these style weapons,” said Stan Standridge, the police chief for the San Marcos Police Department.

The group also expressed support for bills aimed at creating a state criminal offense for “straw purchases,” when someone buys a gun for someone who is barred from buying a gun. Straw purchases are a federal offense, but the police chiefs said it is rarely prosecuted by the feds.

The panel was also critical of the law enforcement response to the Uvalde shooting, saying law enforcement officers are taught protocols for such mass shooting incidents. Standridge said the officers responding to the incident did not appear to lack equipment, but had a “commitment issue” and another police chief said “incident command is maintained until relinquished.”

Brian Hawthorne, the president of the Sheriff’s Association of Texas, was also critical of the law enforcement response in Uvalde.

“There’s no doubt, the sheriff’s association believes that police officers should have taken bullets, not children,” said Hawthorne, the sheriff of Chambers County and a former DPS trooper.

The local law enforcement officials’ recommendations to lawmakers were nearly identical to the recommendations it made two years ago when state leaders convened special committees to respond to the mass shootings in El Paso and Midland-Odessa in 2019. Those committees stopped their work when COVID-19 hit the U.S. in March 2020 and never issued the legislative recommendations they were tasked with providing before the 2021 legislative session.

Rep. Drew Darby, R-San Angelo, who led the special House committee and now sits on the new Youth Health and Safety Committee, apologized to the police panel for not making any progress since the last mass shootings that hit the state.

“I quite frankly am embarrassed that almost the same list that you provided in 2020 is intact and delivered in the same form to this committee than it was two years ago,” Darby said. “We need to start checking some things off your list.”