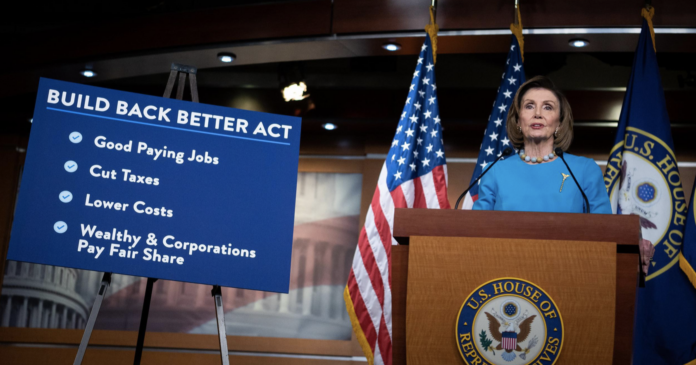 One of Congress’ largest bills in history, according to federal lawmakers, the Build Back Better plan passed the House in a 220 to 213 vote on Friday morning in a victory for President Joe Biden and many Democrats who campaigned on proposals to “fix the middle class” that were passed in the expansive legislation. The vote Friday ends months of partisan negotiations and intraparty fighting. It now heads to the Senate, where it requires only a simple majority to pass, because the budget reconciliation process circumvents the filibuster — which would have required 10 Republicans to support it.

The Texas delegation voted along party lines on the bill. No Republicans voted for the measure, and U.S. Rep. Jared Golden of Maine was the only Democrat to vote against it.

The massive federal spending overhaul establishes a universal pre-K program for every 3- and 4-year-old in the country. It provides lower- and middle-class families funding for child care and makes changes to the child tax credit. The legislation also boosts Affordable Care Act exchanges and allocates nearly $570 billion for measures to combat climate change, increase affordable housing and fund food and nutrition programs for students.

An amalgam of several previous spending proposals, the final House measure comes after concessions by Democrats, who faced pushback from moderates and Republicans over the bill’s final $1.75 trillion price tag.

House leadership scrambled on Thursday to mitigate members’ demand for a full breakdown from the nonpartisan Congressional Budget Office describing the bill’s funding mechanisms, and Democrats hoped for a quick adoption of the bill.

But those plans were derailed by a record-breaking eight-and-a-half-hour speech from U.S. House Minority Leader Kevin McCarthy, which delayed the vote until Friday morning.

The federal legislation, if signed into law, would help cover child care costs for the families of nine out of 10 young children in Texas, according to the White House.

The bill would expand free preschool to more than 570,000 Texas children ages 3 and 4 and expand access to free school meals to an additional 1.6 Texas students during the school year.

The bill would also affect nearly half a million college students in Texas who rely on Pell Grants by increasing maximum awards by $550 for students at public and private nonprofit institutions and providing grants to 59 community colleges in the state.

The bill would also extend child tax credit increases of $300 a month per child under 6 years old or $250 a month per child ages 6 to 17. According to the White House, the framework will also provide a tax cut of up to $1,500 for more than 1.5 million low-wage workers in Texas by extending the American Rescue Plan’s earned income tax credit.

The bill would also expand health care coverage in Texas, providing access to more than 770,000 people who are not covered by insurance and don’t currently qualify for Medicaid.

Texas Republicans added to the chorus of opposition in the minority party to the Biden-backed legislation.

“We meet today to consider the largest spending bill in American history, a bill that no one has read, no one knows its costs, was written in secret and rushed to the floor to hide it from the American people,” Brady said. “If you are worried about rising prices, shrinking your paychecks more and more every month, these trillions of new government spending will only make it worse.”

U.S. Rep. Chip Roy, R-Austin, lambasted Democrats, saying the bill will “go after small businesses and shut them down with tax mandates and going to cripple jobs and small businesses.”

“This bill offers child care, educational opportunities from pre-K to post-grad and the first belated substantial response to the climate crisis,” said U.S. Rep. Lloyd Doggett, D-Austin. “My top health care priority: providing assistance to 2 million Texans out of 6 million Americans who were denied health care by sorry Republican governors, families left out and left behind can finally see a family physician.”

Though the congressional reconciliation process overrides a filibuster vote, the spending bill could still face a challenging vote in the Senate, where Democrats must have the unanimous approval of their caucus to pass.

As with many of the Biden administrations’ legislative priorities this year, moderate Democrats may threaten to spoil the majority party’s plan to pass the bill.

Sens. Joe Manchin of West Virginia and Kyrsten Sinema of Arizona have both openly criticized pieces of the legislation, and the bill could likely undergo changes when it reaches the upper chamber.