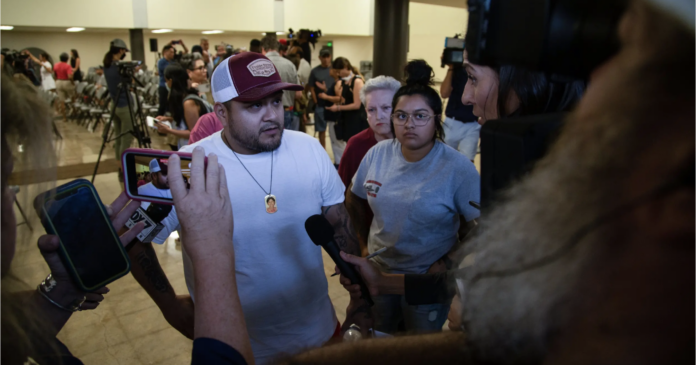 UVALDE — The loved ones of 21 people killed during Texas’ worst school shooting have spent weeks grieving their losses and begging officials for answers.

But even after state officials publicly released the most comprehensive look yet at the Robb Elementary shooting and law enforcement’s painful delay in confronting the gunman, many relatives of the victims expressed anger and continued frustration Sunday.

“Cowards!” Ruben Mata, whose 10-year-old great-granddaughter Alexandria Rubio died, yelled at the three members of a Texas House committee investigating the massacre during a press conference.

Hours earlier, the committee had released a report describing how the shooter prepared and armed himself, how the school district fell short on campus safety preparations and how law enforcement moved too slowly to kill the shooter.

Relatives of those killed and other residents said the report, a private meeting with House committee members and an afternoon press conference either told them things they’d already concluded or skirted answers they’re still seeking.

Some faulted state officials for not saying more about how they plan to prevent another mass shooting. Others said the committee tried to redirect blame from law enforcement to school officials by focusing on the fact that several Robb Elementary doors were unlocked when the shooter arrived. Some say they want officers who delayed the confrontation to be criminally charged.

“They should be charged for not going in and for letting that happen to our kids,” said Evadulia Orta, whose 10-year-old son Rojelio Torres who was killed in the shooting.

According to the House committee’s report, most of the victims died quickly, torn apart by bullets designed for battlefields as the gunman fired about 100 rounds before police arrived. Once law enforcement made it to the school, it took more than an hour to confront the gunman, something that has been heavily criticized by residents, officials and experts. It is unclear whether a flawless police response would have saved any lives. But the report suggests that stopping the gunman sooner could have made a difference for some victims.

[What we know, minute by minute, about how the Uvalde shooting and police response unfolded]

The chair of the House Investigative Committee on the Robb Elementary Shooting told residents and reporters at an afternoon press conference that the 77-page preliminary report will inform the Legislature on what laws it could pass to prevent more massacres. But committee members stopped short of providing any specific proposals.

“We have strong opinions about changes to policy that need to be done. Today is not the day that we’re going to share what our strong feelings and convictions are about that,” said state Rep. Dustin Burrows, R-Lubbock. “After some period of time, we will put our policymaker hats back on and share those opinions with the committee and others about what we think needs to change and what’s done, but right now, we’re gonna let the report speak for itself and focus on the facts that were found in there.”

Alfred Garza III, the father of 10-year-old Amerie Jo Garza who was killed in the massacre, said he didn’t need the 77-page report to find out that police officers at the scene failed to stop the shooter sooner and possibly save more lives.

“Everybody already knew that before this report was even made,” he said. “I was on the site at the school when all this stuff was going down. And I was one of those parents that stood back and let the officers do their job. Well, turns out, they didn’t do their job.”

“It’s my hope that every school district takes some time to read this report. There were multiple systemic failures, including not locking doors,” Guzman said.

New Light Baptist Church Pastor Daryl Colvin, 68, wants police officers to take accountability and apologize for their missteps at Robb Elementary. But instead, he feels like officials have redirected blame to the school staffers, focusing instead on why the doors to the building were unlocked.

The House committee members also said the report was issued to be transparent with community members, but Colvin said he still feels like he is in a “cloud” of misinformation.

In the days after the shooting, state officials made false statements about what happened. The House report acknowledged that the misinformation undermined public trust. But the local pastor said the community still hasn’t been able to get the whole truth. And examples of officials and reports contradicting each other about what happened had already started piling up before the Sunday release of the House committee’s work.

Standing in front of the mural she painted to memorialize victim Uziyah Garcia, Gage Brown said on Sunday it’s been difficult for residents to process the loss in the community when there have been inaccuracies and conflicting information spread about the police response.

Brown is from Brackettville, about 40 minutes west of Uvalde. Growing up, her family would attend church and grocery shop in Uvalde. She said she’s seen Uvalde Mayor Don McLaughlin and other leaders shut down conversations about gun control even though parents have been advocating for such measures in the days after the incident.

Burrows declined to discuss specific policies that may arise out of the report.

“Just not today, out of respect,” Burrows said.

Texas leaders have agreed to dedicate more than $100 million in state funds to boost school safety and mental health services following the Uvalde massacre. But restricting access to guns is likely a nonstarter in the Legislature, which is controlled by Republicans.

[Texas has had eight mass shootings in the past 13 years, while lawmakers have steadily loosened restrictions on carrying firearms]

While polls consistently show that Texans are divided about gun control — with 40% to 50% saying they want stricter gun laws — the vast majority of the state laws passed over the past 13 years have expanded where guns are allowed, who can have a firearm in schools and the right to openly carry guns. Those laws have come as Texas experienced several mass shootings.

Since the Uvalde massacre, state leaders have said they want to focus on “hardening” schools and increasing mental health care access.

Orta, the mother of 10-year-old victim Rojelio Torres, said she doesn’t know if she can send her other three kids back to school until she knows if the school district plans to upgrade security, such as changing the locks or getting new fencing. She said that she was among the parents who met with the three-member committee before the report was released publicly but that she got very few questions answered. She’s one parent who wants to see officers criminally charged.

Uvalde County District Attorney Christina Mitchell Busbee will decide if any criminal charges should be filed against any police officers after the Texas Rangers complete their investigation. She recently told the Uvalde Leader-News that her duty is “to see that justice is done in a fair and impartial manner to determine if actions in my jurisdiction rise to the level of a felony criminal offense.”

The Uvalde schools police chief and the acting chief of the city police department on the day of the shooting have both been placed on leave as their actions are investigated.

While House committee members didn’t publicly address the legal or professional fates of law enforcement, Guzman, the former Texas Supreme Court justice, said officers who failed to take action should not be working in law enforcement.

“The report says that if you’re not willing to put the lives of the people you serve or of those children before your own, in my view you should find another job,” she said.