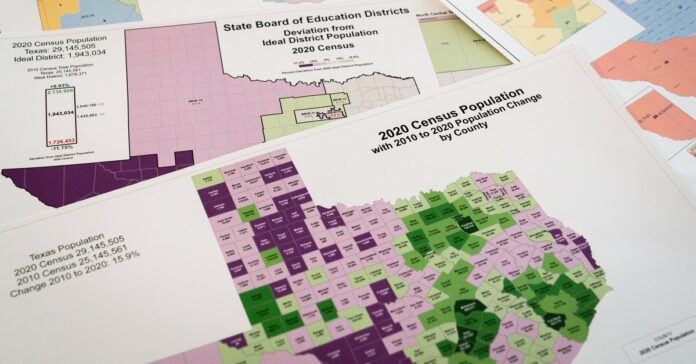 The intensity with which Texas Republicans are struggling against demographic tides as they redraw the state’s congressional districts can best be seen in their proposed maps for the Dallas-Fort Worth region, specifically its suburbs.

For decades, suburban communities offered the GOP solid political ground. But census figures demonstrate the state is growing away from Republicans, with nearly all of its population gains coming within communities of color more likely to support Democrats.

That shift has reached the suburbs. In a bid to hold the political turf, Republicans are zeroing in on communities with high shares of potential voters of color and grafting them onto massive districts dominated by white voters.

That sort of surgical targeting is strikingly captured by the proposed changes to the 33rd and 6th congressional districts, which will diminish the influence Hispanic voters have in choosing their representatives in Congress. The proposed maps have already cleared the Senate and await a vote in the House.

A significant portion of the Hispanic voting age population in the suburban cities between Dallas and Fort Worth is currently in TX-33, represented by Democratic U.S. Rep. Marc Veasey. The district stretches from Fort Worth in Tarrant County, across suburban communities like Arlington and Grand Prairie and into Irving’s heavily Hispanic neighborhoods on the west side of Dallas County.

Despite its odd shape, TX-33 was actually drawn by a three-judge federal panel a decade ago to protect the voting rights of people of color in the area. That panel devised the district so that Hispanics made up the largest demographic group, but it offered Hispanic or Black voters an equal chance to elect their preferred candidate. Veasey won that job.

A decade later, Hispanics make up a large majority of the district’s voting age population and are just shy of the majority of eligible voters, which includes citizens only. But under the Republicans’ proposed map, many of those voters would be sunk into a starkly different political reality.

Republicans reconfigured part of TX-33 to shore up another neighboring GOP district, but that left behind Hispanic areas around Irving. They looked south and saw a swath of rural, mostly white counties. To connect them, they extended a bizarre finger northward into Dallas County, picked off the Democratic-leaning areas and melded them into a different district — TX-6 .

The current TX-6 includes just three counties — all of Navarro and Ellis counties and a diverse portion of southeast Tarrant County. Though it was drawn as a solid GOP district, it has seen thinner Republican margins of victory in recent elections; former President Donald Trump won just 53% of the vote in 2020.

In a bid to shore up TX-6, giving it a hypothetical 20-point margin of victory for Trump, the Republicans’ proposal to revamp the district significantly stretches its footprint — including six more counties to the south and east.

That engineering would boost white voters’ control of the district while stranding Hispanic voters who in the past were concentrated enough to influence election outcomes.

The manipulation at the expense of voters of color is not limited to these districts. Throughout the North Texas region, diverse neighborhoods are shifted into sprawling districts that stretch into more rural areas with majority white electorates.

The demographic change map-drawers are contending with has transformed the area so forcefully over the last decade that their proposals even carve up neighborhoods densely populated with Asian Texans, whose small but growing numbers were beginning to translate into electoral influence.

Though they make up just a sliver of the state’s total population, Asian Texans have seen the most rapid growth over the last decade compared to other demographic groups. They’ve made particular headway in areas like Collin County, one of the fastest-growing in the state, where they contributed significantly to the county’s population gains.

A large concentration of the Asian voting age population in Collin County is currently contained in the 3rd Congressional District and represented by U.S. Rep. Van Taylor, a Republican. The suburban district skewed so heavily for the GOP that Taylor’s predecessor ran without a Democratic challenger in 2012 and 2014.

But the Republican margin of victory narrowed significantly in recent elections. Taylor won reelection with just 55% of the vote; Trump won the district by just 1 percentage point.

In response, Republicans are proposing a complete reconfiguration of the district, almost surgically sketching lines around neighborhoods densely populated by potential Asian voters.

Under Republicans’ proposed map, many of those Asian residents would now reside in the new 4th Congressional District, which used to contain just a small share of Collin County’s population. In reaching in to pick up their neighborhoods, TX-4 grows its total Asian population from roughly 15,000 in its previous configuration to nearly 103,000.

But Asian voters will see the strength of their votes diminished in a district in which white residents will make up a whopping 73.9% of eligible voters.

In the current TX-3, the share of Asian eligible voters had reached 10.8%.

The new maps would cut it roughly in half to 5.6%.