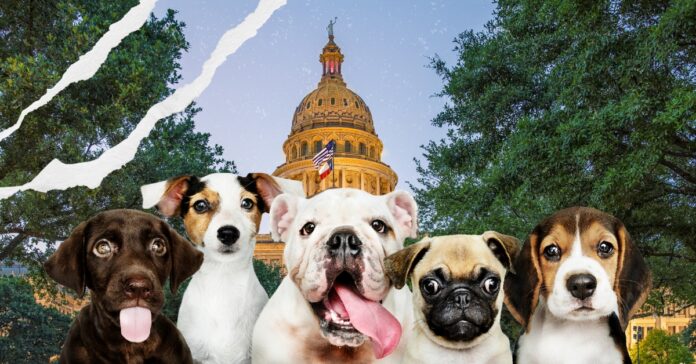 A bill that would ban pet stores in Texas from getting animals from out-of-state for-profit breeders, has been filed by Jared Patterson, a Republican representative from District 106 in Frisco.

House Bill 870, also known as HB 870, would ban pet stores in Texas counties with a population of over 200,000 from selling animals that were obtained from any source other than an animal shelter, animal rescue organization, or animal control agency.

The purpose of the bill is to target puppy mills, which are facilities that breed large numbers of animals in inhumane conditions and sell them to pet stores.  HB 870 would put an end to cruel puppy mill practices, protecting both pets and consumers.

“Out-of-state puppy mills store puppies in poor conditions, take them away from their moms too soon, and truck them hundreds or thousands of miles across the country to be sold in retail pet stores,” said Representative Patterson. “There’s a reason why only one of the top 25 retailers still sells dogs from these conditions. I’m proud to once again file HB 870 to provide the necessary restrictions to protect pets and their owners.”

In 2021, Patterson’s identical bill HB 1818 received huge bipartisan support but ultimately couldn’t get past the finish line before session ended. By filing early, HB 870 has more chances of being successful in the coming session, according to Texas Monthly.