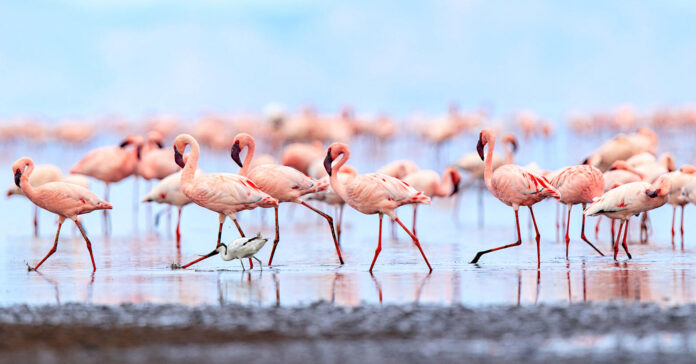 In 2005, a flamingo ditched its enclosure in Kansas and fled to Texas’ gulf coast area, where it has lived ever since. Flamingo No. 492 rode a strong gust of wind out of the zoo and flew south some months later in hopes of avoiding a coming severe thunderstorm. David Foreman, a local fishing guide and angler, spotted the bird 17 years later in a video recording.

While No. 492’s identification band isn’t visible in the footage, it is the only flamingo that both anglers and the Department of Texas Parks and Wildlife consecutively see in spring. Locals have nicknamed the resident flamingo “Pink Floyd.”

The Gulf Coast hosts an ecosystem similar to the North African salt lakes in which greater flamingos naturally thrive. There is plenty of food for Pink Floyd to filter out of the water, brine shrimp especially, which give flamingos their color.

“We believe he actually moves around and follows food sources, which is why No. 492 is only sighted occasionally,” says Anne Heitman, Kansas Sedgwick County Zoo’s bird curator. “As the food sources ebb and flow, (flamingos) follow them around. So he’s probably traveling to other regions, just where people aren’t probably seeing him. But he should be able to find the types of foods that he needs down there.”

King was happy to hear No. 492 had escaped the storm and was doing well in Texas.

“We decided very early on, once he flew down to Texas, that we would not make any efforts that could potentially harm him or harm the wildlife around him,” King added. “His presence down there is not hurting the ecosystem or anything, and he’s not a nuisance. Flamingos are very non-aggressive birds.”

Pink Floyd is only 20 years old and will likely live to around 40, says King. Besides inclement weather, “really the only threats to him down there would be humans, if people try to get too close, try to capture him or harm him in some way,” she added.

If you see Pink Floyd, King asks that you keep your distance.

“We don’t want him feeling threatened and to end up harming himself or certainly have someone else harm him,” King added.