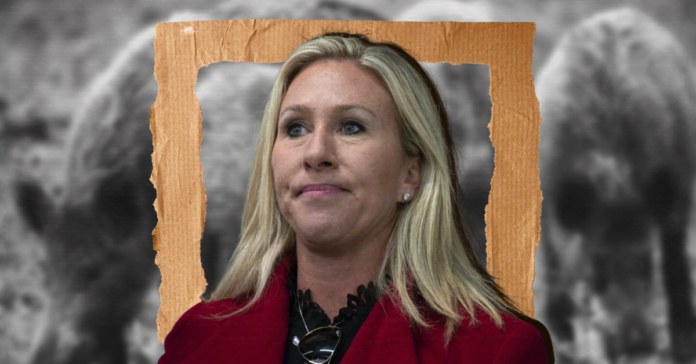 Georgia congresswoman Marjorie Taylor Greene launched a very peculiar campaign that caused a lot of sensation on social media. Taylor Greene published a video where she compares Democrats to hogs and she insists that it is very important to go “hog hunting”.

Greene appears on video with an assault rifle, she then goes into a helicopter and starts shooting hogs. The strange comparison between hogs and Democrats comes from the struggle that a lot of farmers in the south face towards hogs going into their fields and ruining the crops. So Greene, referring to inflation, says that the hogs are not the only thing that prevents farmers from doing their job. “We’ve got skyrocketing inflation, high diesel fuel and Democrats’ America last policies; Democrats aren’t the only ones destroying farmers’ ability to put food on the table. We’ve got wild hogs destroying farmers’ fields”, Greene said.

She then announced a contest in which people can register to go hunting with her in a helicopter.

Are hogs really a problem?

In Texas, according to the Texas Parks and Wildlife Department, feral hogs are an exotic, invasive species that is “wreaking havoc” on Texas’ native ecosystems. The feral hog population causes huge (and expensive) damage to the Texas economy and currently, there are no regulations on hunting these animals. There are around 1.5 million hogs in Texas according to TPWD.