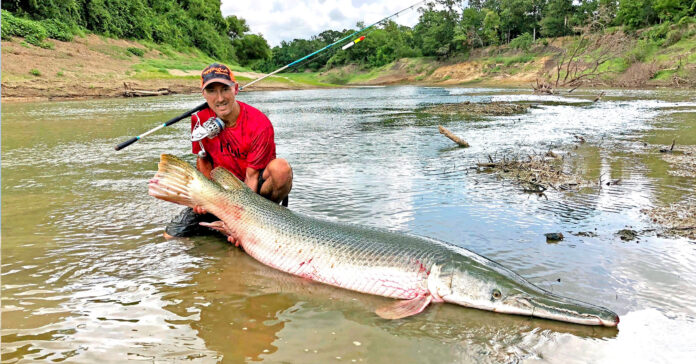 Payton Moore is passionate about big fish. He has a whole YouTube channel dedicated to catching “it”: the giant creature as a result of a thrilling and satisfying hunt in the river. On May 11th, Moore caught his biggest prize up to date: a 300-pound alligator gar.

Years of practice taught him patience. When he was out on the Houston bayou as usual, with his fishing rod in the water, he suddenly felt a very strong thud and knew he had quite the company in his hands.

“It felt like somebody’s car had just started up and was rolling out of the driveway, and I’m hanging on to the end of it”, he stated for the Houston Chronicle.

To capture the beast, Moore had to tire it first, since he knew his strength was no match for the 300-pound gar that had caught his bait. He applied his expert fisherman knowledge, and tired the animal by making it swim in circles.

At the precise moment, he decides to attack. He wrapped a lasso around the thick body of the fish and secured its fins, finishing a nearly 15 minute long battle. His enemy was shortly released though, since he had no intention of hurting it. Payton Moore used to work at the Houston Zoo as an educator.

The grand prize, the massive alligator gar, is an ancient fish that can weigh up to 350 pounds, the largest of all gars. They pose no threat to humans, and its earliest predecessor dates back 157 million years. The one Moore caught could be anywhere from 50-100 years old.

“The fish literally could have been swimming around in Texas waters when Truman was president,” he said.

You can watch his video below:

Getting into unknown water tunnels, catching fascinating shark looking fish that fit in the palm of your hand, getting the point of view of the animals that roam murky waters through a remote control underwater submarine. Moore is a fan of the aquatic life in Texas rivers and shares knowledge to his viewers, with the purpose of promoting the preservation of wildlife and ecosystems like the Houston bayou.