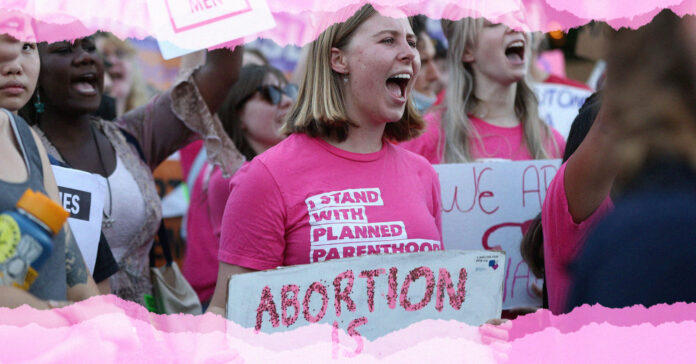 The vast majority of Americans — 7 in 10 —  do not believe politicians are informed enough about abortion to craft fair policies, according to a new 19th News/SurveyMonkey poll.

That distrust spans the political aisle: 70 percent of Republicans and 74 percent of Democrats said politicians were insufficiently informed about abortion. It was also consistent across men, women and gender-nonconforming Americans.

The Supreme Court’s June decision overturning Roe v. Wade has given lawmakers — and specifically state politicians — sizable power in shaping abortion policy. In the months since the Supreme Court overturned Roe, 11 states have begun enforcing laws that ban virtually all abortions. Two more do not permit abortions for people later than six weeks of pregnancy. Another, Florida, has outlawed abortions beyond 15 weeks.

The poll’s findings indicate deep, widespread distrust in government and political figures, even as the new restrictions on abortion mean many pregnant Americans have fewer choices than previously and some doctors have grappled with what new restrictions mean when their pregnant patients have faced health risks, sometimes serious ones.

The poll, conducted from August 22 through August 29 among a national sample of 20,799 adults, also found that 61 percent of American adults believe abortion should be legal in most or all cases, a finding in line with other public opinion polling. That includes 86 percent of Democrats, 65 percent of independents and 36 percent of Republicans. Only 10 percent of adults supported banning the procedure entirely.

“I grew up hearing my great-grandmother telling stories about her ‘clothes hanger’ abortions,” said Jessica Macias, a 35-year-old librarian from Corona, in California’s Riverside County. “It’s so scary to me that there are still people who have to resort to options like that in areas where there’s nobody to turn to.”

Macias, whose family immigrated from Mexico and who was raised Catholic, has had two abortions. The first was when she was 17 and the second just over 10 years later, when she was 28. Her family supports abortion rights, in no small part because both her grandmother and mother were vocal about the burdens imposed by an unintended pregnancy.

Now, she said, she worries about the people who won’t have the option she did and who will be forced into parenthood before they are ready or who cannot afford to have another child. She fears the lawmakers passing abortion restrictions don’t understand the complexity of pregnancy — especially unintended pregnancy.

“For some people they’ll spend years of a lifetime trying to get pregnant. Their journey is different than someone who has a surprise pregnancy or becomes pregnant in unwanted circumstances,” she said. “Because of those nuances I don’t think it’s for anyone to decide — especially in these huge blanket terms — how many weeks along you can be before you access an abortion, or what kinds of contraceptives and abortion access you can obtain.”

Large majorities of most religious groups said abortion should be legal in most or all cases: 94 percent of atheists or agnostics, 79 percent of Jews, 77 percent of Buddhists, 68 percent of Hindus, 63 percent of Muslims and 57 percent of Catholics.

A few groups were more supportive of restrictions. Forty-two percent of Mormons said abortion should be legal all or most of the time. Christians were evenly split on the matter, though those who identified as evangelical or born-again were far less likely to support the legality of abortion in all or most cases. Just 32 percent said so, compared with 64 percent of mainline Christians.

“If people don’t want to have babies, they shouldn’t be having sex. God created man and women to procreate. The pleasure of sex is a secondary item,” said Coleen Hoover, 74, from just outside Kansas City, Kansas.

Hoover, a political conservative and evangelical Christian, believes abortions should be outlawed, including in cases of rape and incest and lethal fetal abnormalities. She worries that Biden’s administration has too much influence over abortion policy.

“I don’t trust the administration that’s in now to regulate anything,” she said.

There are state lawmakers she trusts to regulate abortion more, she said — particularly the more conservative lawmakers in her home state. But the recent defeat of a Kansas ballot initiative that would have removed the state’s abortion protections leaves her less likely to trust voters or the government when it comes to abortion specifically.

Views like Hoover’s are rare; most voters do not support blanket abortion bans. But Republicans, per the 19th News/SurveyMonkey poll, are more likely to share her opinion. About 15 percent of Republican or Republican-leaning adults said they believe abortion should be banned in all cases; an additional 47 percent said it should be illegal in most situations.

Still, even many Republican adults who said they support abortion access expressed distrust of Democratic lawmakers — even though Democrats in general are more likely to favor policies ensuring abortion rights.

Abortions “need to be available at every state, but there needs to be some limits,” said Tricia Wingerter, 60, who manages a home care company from her home in Allentown, Pennsylvania. “You need to think about what you’re doing.”

Wingerter would support banning abortions after six months of pregnancy, for instance (a point at which the procedure is already incredibly rare, per government data). And on principle, she said, she believes that if Americans are divided on abortion, the government should find a solution that lies in the middle.

Wingerter, a Republican-leaning independent, said her skepticism is aimed at Biden, who she believes is too far to the left on abortion rights and who she said does not respect the viewpoints of people who don’t support abortion. (Abortion rights supporters, meanwhile, have criticized the president, who they say has done too little. Biden himself has previously revised his own positions on abortion, even in 1982 voting for a constituonal amendment that would have undone Roe v. Wade)

Still, Wingerter added, abortion isn’t a top election issue for her — not even close. She’s seen news reports about people denied access to abortion but worries those aren’t credible. “I see such a bias that it’s very hard for me to watch the news,” she said.

Her number one concern, she added, is “the border.”

About 7 percent of adults said abortion is the issue most driving them to vote in the midterms. But there is a gender gap: 4 percent of men said abortion is a voting issue, compared with 10 percent of women and 7 percent of gender-nonconforming people. Other polls have shown abortion rising as a major election issue, particularly among Democrats and independent voters.

For Karla Bird, a 66-year-old retiree in Wyoming, abortion rights are an existential concern. She fears the overturning of Roe v. Wade could erase progress made in her own lifetime toward gender equity. No politicians can or should have the power to limit access, said said, and any discussion should remain between the pregnant patient and their doctor.

“The most basic freedom that a human has is to regulate their own sexuality and reproductive health,” she said. “I do not think it’s the government’s business.”

Bird, a Democrat, said protecting abortion access is her number one priority in the midterms. Wyoming, her home state, has passed a trigger law banning abortion, but the law has so far been blocked in court. Still, abortion is hardly available in her state — only one provider offers the service, and only during the first trimester. People who seek abortions generally have to leave Wyoming.

Bird has had two abortions — one in 1973, the year Roe v. Wade was decided — and another a few years later, when she was in college. In both cases, she had used birth control that failed. Had she not had those abortions, she said, she fears she wouldn’t have been able to attend college, pursue a career, marry her husband, or give birth to the two children she has since raised. She worries about what the future will look like for her four grandchildren, all of whom are girls.

“I don’t want the patriarchy to pull back the evolving recognition of the rights women have,” she said.