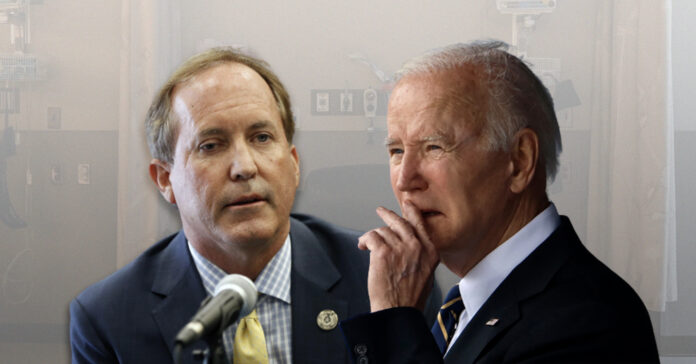 Is the Biden Administration seeking to transform every emergency room in the country into a walk-in abortion clinic? According to Texas Attorney General Ken Paxton, yes. On Thursday, he sued the administration over federal rules that require abortions be provided in medical emergencies to save the life of the mother.

Save the life of the mother.

Earlier this week, the Biden administration sent a memo to state officials to remind them of an existing law called the Emergency Medical Treatment and Labor Act, which “requires that all patients receive an appropriate medical screening examination, stabilizing treatment, and transfer, if necessary,” according to the Department of Health and Human Services.

That requirement exists “irrespective of any state laws or mandates that apply to specific procedures,” the memo said, as reported by The Washington Post.

Paxton believes that federal rules shouldn’t have to apply to the Lone Star State.

“President Biden is flagrantly disregarding the legislative and democratic process—and flouting the Supreme Court’s ruling before the ink is dry—by having his appointed bureaucrats mandate that hospitals and emergency medicine physicians must perform abortions,” the lawsuit said.

HHS defended its guidance in a statement shared with The Washington Post Friday morning.

“Federal law is clear: patients, no matter where they live, have the right to emergency care — including abortion care, if their doctor deems it necessary,” an agency spokeswoman said in an email. “HHS stands unwavering in our commitment to protecting patients’ right to access the health- and life-saving care that they need and that is protected by federal law. We will continue doing everything we can in the fight to protect access to health care, including reproductive health care.”

Even though, the HHS guidance is focusing on abortions performed in emergency siuations, Paxton wishes to change the narrative: Biden is forcing emergency rooms to be “walk-in aboriton clinics.”

“This is yet another example of an extreme and radical Republican elected official,” White House press secretary Karine Jean-Pierre said in a statement on Thursday. “It is unthinkable that this public official would sue to block women from receiving life-saving care in emergency rooms, a right protected under U.S. law.”