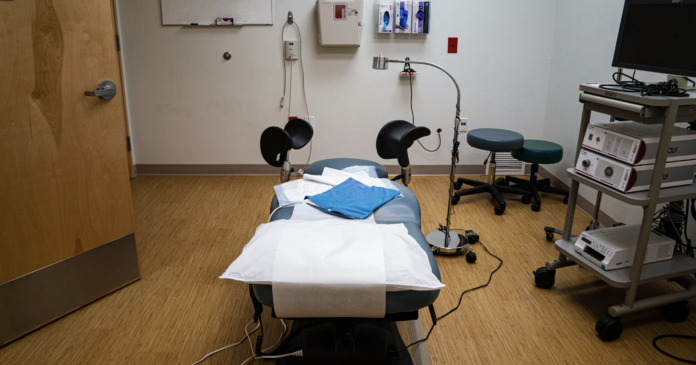 The U.S. House on Friday passed a bill sponsored by Rep. Lizzie Pannill Fletcher, a Houston Democrat, that would protect a person’s right to travel across state lines to receive an abortion.

The bill is one of two that the House passed Friday to shore up abortion access. The other would effectively codify Roe v. Wade by creating a federal law allowing people to receive abortions nationwide. The bills are unlikely to become law since they require 60 votes in the Senate to move forward.

Rep. Henry Cuellar, D-Laredo, was the only Democrat to vote against the bill that would effectively codify Roe v. Wade. Cuellar also voted against a prior attempt last year to codify Roe. That measure passed the House but failed in the Senate. All Democrats, including Cuellar, and three Republicans voted for Fletcher’s bill.

Fletcher’s bill comes as some state Republicans in Texas are trying to make it harder for Texans to travel outside the state to receive an abortion. The bill would shield the rights of any person or group helping someone get an abortion out of state. The U.S. Justice Department and any individual affected by a violation of the legislation could sue violators — a provision that appears to be modeled after Texas’ recent ban on abortions after about six weeks into pregnancy, in which private individuals served as the de facto enforcers.

“It’s really important now that Congress … protect people from these unconstitutional efforts to restrict or impede or otherwise retaliate against people who are traveling across the country and the people who are helping them,” Fletcher said.

The two votes are the first major efforts to pass federal legislation to protect abortion rights since the Supreme Court last month took stunning action to end the constitutional right to an abortion that existed for nearly half a century. That decision has already sent many Texans seeking the procedure to other states. Earlier this month, The Texas Tribune reported that 75% of the patients at an abortion clinic in New Mexico were from Texas.

Fletcher said the idea of preventing pregnant people from traveling across state lines for health care is extreme.

“Everyone should be supporting the right of American citizens to travel within the states,” Fletcher said. “It’s something that’s as old as our country itself.”

“May a State bar a resident of that State from traveling to another State to obtain an abortion?” Kavanaugh wrote. “In my view, the answer is no based on the constitutional right to interstate travel.”

What’s less clear is whether states can stop groups and individuals from helping people obtain those abortions.

If Fletcher’s bill manages to pass the Senate, the legislation would be a lifeline for Texas abortion funds — which help provide resources for people seeking abortions out of state — that have paused their operations due to the uncertainty of Texas’ abortion laws. Fletcher’s proposal would also safeguard businesses that have offered to reimburse employees who need to leave their home states in search of a legal abortion. Major companies like Lyft, Amazon, Uber and Starbucks have all said they would help employees who wish to seek abortions out of state.

Some Texas Republicans have swiftly responded that they intend to introduce state legislation to penalize those companies.

The Texas Supreme Court said this month that for the time being a state law dating back to 1925 could be enforced, which penalizes not just providing abortions but also “furnishing the means” for one.

The 11 members of the Texas Freedom Caucus — some of the staunchest conservatives in the Legislature — cited the 1925 law in a letter to the Sidley Austin law firm last week, targeting them for pledging to reimburse travel costs for employees who receive abortions outside the state.

A group of U.S. senators on Tuesday introduced similar legislation to Fletcher’s bill on abortion travel. But 10 Republican senators would need to support the measure to break a filibuster.

The search for out-of-state abortions in Texas increased dramatically last year after the state passed its ban on abortions after about six weeks of pregnancy. In the first few months after the ban took effect in September, about 1,400 Texans left the state for an abortion each month, according to a study from the University of Texas at Austin.

More than half of states are expected to ban or severely restrict abortion access after the Supreme Court’s ruling. States close to Texas — Oklahoma, Arkansas and Mississippi — have also essentially outlawed all abortions.

But even if other states are offering abortions, the process of making travel plans is lengthy and expensive. The people who will be able to receive an abortion will likely be more wealthy — and people of color are disproportionately impacted by these disparities.

“Texans are experiencing disruption in getting the health care they need at home by having to travel, having to pay for travel to take time off work, to get child care,” Fletcher said.

Disclosure: Lyft and the University of Texas at Austin have been financial supporters of The Texas Tribune, a nonprofit, nonpartisan news organization that is funded in part by donations from members, foundations and corporate sponsors. Financial supporters play no role in the Tribune’s journalism. Find a complete list of them here.