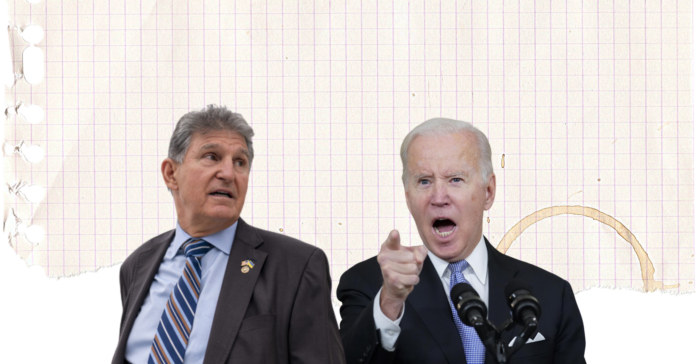 WASHINGTON, July 15 (Reuters) – Democrats and environmental groups called on President Joe Biden to take steps on his own to reduce climate emissions after Senator Joe Manchin once again delayed action on legislation to do so.

For more than a year, Democrats have struggled to pass a sweeping domestic policy bill that would boost incentives to reduce climate emissions, lower prescription drug costs and raise taxes on corporations and the wealthy.

Manchin has been negotiating with Senate Democratic Leader Chuck Schumer for months after his opposition torpedoed a more ambitious package last year.

But Manchin informed Schumer and his staff this week that he would only support legislation that lowered prescription drug pricing and would be unwilling to back legislation that included a tax hike and climate provisions, according to a Democrat briefed on the conversations. Read full story

Democrats want to pass legislation by August, when many states set healthcare premiums.

Manchin told a West Virginia radio station that he was still open to talks. But he said he would only support quick action on the drug pricing aspect of the plan, and wanted to wait to see inflation and interest-rate figures before tackling the other elements.

“I want climate. I want an energy policy,” he said. “I would not put myself through this if I wasn’t sincere.”

Manchin represents the coal-producing state of West Virginia and has been skeptical about some efforts to tackle climate change. Read full story

Without Manchin’s support, Democrats would be unable to advance the legislation in the Senate, which is divided 50-50 between Republicans and Democrats.

That would leave them unable to deliver on major portions of Biden’s domestic agenda ahead of the Nov. 8 midterm elections, in which Republicans are favored to win control of at least one chamber of Congress.

White House spokesperson Karine Jean-Pierre said Biden would continue to use “every tool” in the toolbox to combat climate change, but declined to comment further.

Biden will now have to rely largely on executive actions to tackle climate change, such as issuing new Environmental Protection Agency rules on power-plant emissions and limiting oil and gas activity on public lands.

Those rules could be overturned by future presidents.