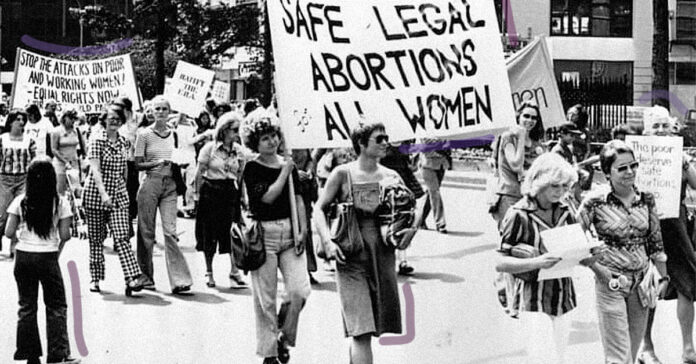 In a historic moment, the Supreme Court of the United States decided to overturn Roe v. Wade, taking away the right to access abortion to over 167 million women in the US. The decision has many dangerous implications for women, but also every human living on US soil because taking away a human right opens up a box for many other issues.

Among Human Rights, there’s something called the “principle of progressivity,” meaning that every right needs to be progressively developed in order to have everyone fully exercise it.

Any alteration to a right that has already been granted is only permitted if it is made in order to improve its exercise. Meaning that if the population has been granted the right to access clean water, there is no way that right can be removed from the constitution nor other laws can be made that deny that right. One of the main reasons human rights were created was to avoid that a popular majority could take away the rights of anyone in a minority.

Human rights are not to be messed with, they can’t be ignored. A good example is the right to bear arms, a right recognized in the second amendment of the US Constitution and respected to the extent that no matter the number of mass shootings happening in the country, there are no laws that can prevent US Citizens from legally obtaining guns. Unfortunate in this particular case, but pretty good for any other rights. In theory, fundamental rights can not be receded, no matter how many people want it.

The right to access abortion was recognized in a historic decision back in 1973 when Roe v. Wade passed. The matter was widely discussed and questioned by both conservative and liberal minds. Conservatives claimed that a zygote was already a human and therefore abortion was a homicide. Liberals, on the other hand, questioned the way the decision was legally funded: the 14th amendment and the right to privacy. That decision allowed women to access abortions for over 50 years, but the legal sustenance was weak and for many years activists requested the court to strengthen the right of women to choose. The Supreme Court had a chance to create a stronger legal basis back in 2016 in the case of Woman’s Health v. Hellersted, but they refused to do it.

There have been many attempts by the GOP to restrict or even ban access to abortion, but even conservative judges, appointed by Republican presidents, recognized that once a decision of that nature had been ruled constitutional, it could not be challenged.

And yet, the decision made today on the Dobbs v. Jackson Women’s Health Organization case completely violates the principle of progressivity and goes against the roots of law. Abortion was supposed to be protected by the US Constitution since 1973, but as of today, the court ruled it isn’t. This means that little girls today will grow up with fewer rights than their mothers did.

Even Democratic Senator Joe Manchin, one of the few congressional Democrats who is known for opposing abortion rights, criticized two conservative justices after they announced the decision, “I trusted Justice Gorsuch and Justice Kavanaugh when they testified under oath that they also believed Roe v. Wade settled legal precedent, and I am alarmed they chose to reject the stability the ruling has provided for two generations of Americans.”

This ruling goes against two fundamental principles of Law: Legality and Legal Certainty. The principle of legality considers that any exercise of public power must be carried out in accordance with the current law and its jurisdiction, not the will of the people. There is a legal framework that governs human behavior and although it can be modified, its essence must be respected. The principle of legal certainty, also known as “certainty of law”, can be defined as the predictability of the legal consequences of acts or conduct.

Reversing a decision of this nature, altering a human right and restricting it absolutely for women in the United States, leaving them at the mercy of state legislatures and at the mercy of the majority is a flagrant violation of this principle.

This decision not only puts millions of women at risk by unequivocally violating their human rights, but it is also an insult to legal practice because it brutally violates its inherent principles.

The icing on the cake, from a legal point of view, is that rights do not work in the singular, but rather are a kind of network where they all intertwine. It is not possible to exercise the right to education without guaranteeing the right to health, for example.

Human rights, both civil-political and economic-social-cultural-environmental, must be understood as a whole and not as individual rights. It is not possible to rank them in the abstract and find supremacy in one class of rights over others. There are two principles that “regulate” the above:

The principle of indivisibility establishes that human rights cannot be separated from each other or violated to a greater or lesser extent. These two principles are a crucial part of the legal framework of human rights. Restricting women’s right to abortion immediately implies a restriction on their right to health, the free development of their personality, to not being discriminated against, and endless more.

Prohibiting abortion not only limits women in an individual sphere of their lives but also generates a prohibition that threatens all the other aspects of their everyday life.

The Supreme Court of the United States went against the essence of what the Law has been for the last 100 years. It ignored fundamental principles of legal practice and in doing so took millions of women with him.

Today democracy, justice, and progress were lost. The dissenting votes of the three liberal judges perfectly frame the frightening risks that no human right is guaranteed.