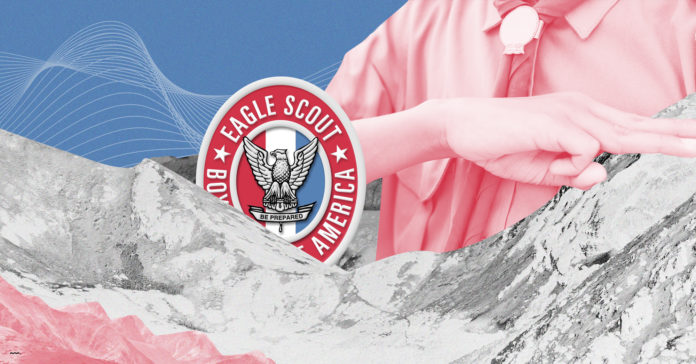 Beatrix Jackman, a 19-year-old transgender woman attending the University of Texas at Austin, and Abby Winkelman, a 14-year old girl in Austin, are the first females in Texas to achieve the rank of Eagle Scout in the Boy Scouts of America.

“It was important for me to blaze this path so others could follow,” Jackman told KXAN.

“The journey to achieving Eagle equips a young man or young woman with the skills, experience and values to become a leader in their community, our nation and the world,” Mead wrote in an email to RA News. “But Beatrix’s accomplishment is a reminder how important it is to provide opportunity to as many youth as possible to join scouting and benefit from its proven program.”

Scouts BSA began letting both boys and girls into all of their programs in 2019.

“I’m just very glad that the Boy Scouts made this big jump because this is a big jump. Letting girls into their organization? That’s crazy. And now that they did that, it’s just a whole ‘nother step for girls and women and opportunities, especially later in life like jobs for women,” Winkelman said to KXAN. “It means that the world is changing. It means that the world and America is evolving around the fact that girls can do the same things that boys can, and that girls are getting more opportunities.”

For her Eagle Scout project, Jackman focused on PFLAG’s Austin chapter, a support group for LGBTQ people, their parents and families that helped her and her mother through her transition.

“We are happy to have assisted her in her challenge of becoming one of the first female Eagle Scouts. That Beatrix is transgender did add much significance to the seismic shift in the Scouts BSA’s stance on gender identity. We are honored to have been a part of that change,” said Anna Nguyen, president of PFLAG Austin, on Monday.

“Personally, I remember most how much happier Beatrix appeared to be when she was able to present, and more importantly, live in, the gender identity that brings her the most peace and contentment. Human beings are much happier when they’re able to live their life free of society’s strictures on matters such as gender identity,” added Nguyen.

“Community service is core to the mission of scouting, and for years PFLAG has advocated for LGBTQ+ youth to be included in that mission. We are very proud of Beatrix and all the transgender and LGBTQ+ scouts who demonstrate that a leader is a person whose skills and passion, inclusive of their sexual orientation and gender identity, are driven to serve,” said Brian K. Bond, executive director of PFLAG National in a statement on Monday.

The city of Austin is in the process of honoring Jackman for her achievements.

Review boards for the Inaugural Class of Female Eagle Scouts will continue until Feb. 8, 2021.

There are several other female scouts who are in the process, including a teen in Dallas, said Mead.

As for national numbers, Scout BSA’s communications department confirmed on Monday that they will not have exact figures on the Inaugural Class of female Eagle Scouts until February.

The Eagle Scout rank is the highest achievement in Scouts BSA, and on average only about 6% of Scouts achieve it. The BSA website states, “Eagle Scout” is not just an award; it is a state of being.”