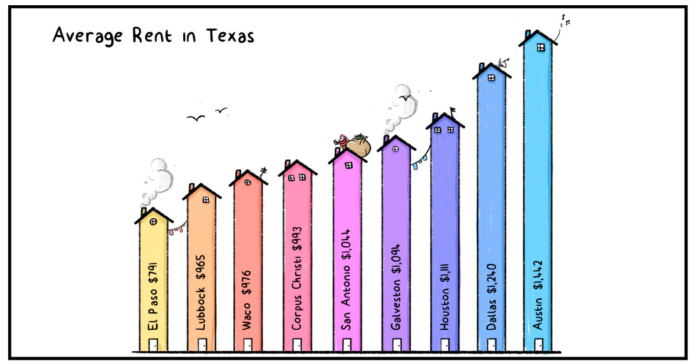 Austin is one of the greatest success stories in Texas in terms of recent job growth and development. But this has come at a hefty price: Austin has become a city very few people can afford to live in.

Greater Austin’s population grew 23.3% from 2010 to 2017, in large part spurred by tech companies opening offices and headquarters here, such as Google, Apple and Facebook. As a result, housing prices have skyrocketed.

According to Zillow, the median home value in Austin went from $295,000 in October 2013 to $400,000 in October 2019. In that same time frame, median rent for a one-bedroom apartment jumped to $1,780 from $1,340—a 32.8% increase in just 6 years. Housing today is only affordable for affluent newcomers, pushing low- and middle-income people, some of whom have lived here for decades, out of their homes.

The Austin City Council is currently debating how best to address this housing crisis, notably through a proposed plan to amend the land development code that aims to increase the housing supply to the tune of 405,000 units.

“The long game is the idea that more units will help stabilize house prices throughout the region,” assistant director of the Austin Transportation Department Annick Beaudet told the Texas Observer.

Density is also a big concern. Families unable to afford the rising cost of living have been pushed farther outside city limits, creating sizable sprawl and making people drive more miles to get to work and school. The proposed code would allow denser housing to be built— such as duplexes, townhouses and apartment buildings—where currently only single-family homes are allowed.

While this plan could increase affordability, many longtime homeowners think their property taxes will increase. They might in turn feel pressure to sell to developers, who would supposedly bulldoze their houses and rebuild those new, more profitable units.

“What you are proposing is taking my home away,” said Austin resident Virginia Hoffman during a public hearing on December 7.

Housing activists are watching this issue closely, and some are turning their attention to what they consider to be the route cause. On November 20, the Development without Displacement Coalition gathered at City Hall to demand the Austin tech industry commit $2 billion for affordable housing, like other tech hubs have.

Austin Justice Coalition, a criminal justice–oriented organization, recently widened its scope to enter the housing debate. “We started to realize that a lot of the work we do, the communities that we’re serving, they are being displaced,” community organizer João Paulo Connolly told KUT, Austin’s National Public Radio station. “We think that the status quo of Austin already displaces people of color. So we are interested in the land development code and looking at it through the lens of equity.”

On December 11, the City Council voted 7-4 to approve the new land development code. The council’s code revision team will now prepare the revised code text and map prior to a second reading in February.