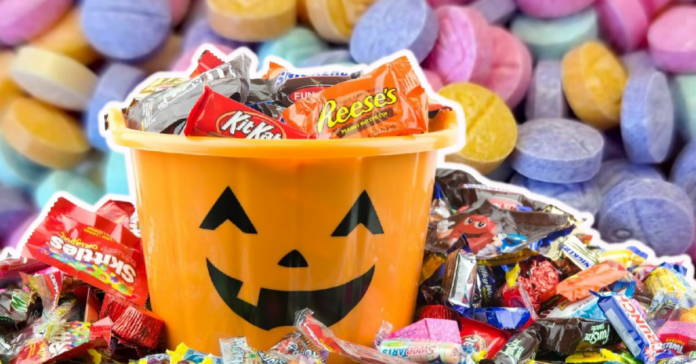 Ronna McDaniel, chairwoman of the Republican National Committee, recently appeared on Fox News to sound the alarm about rainbow-colored fentanyl. While she was busy scaring mothers across America into believing drug cartels are planning to give away their drugs as Halloween candy, Republican Senators decided it was worth a public service announcement to second the alarm.

The story of the fentanyl as a Halloween giveaway item is tied to the constant barrage of criticism of Democrats regarding the southern border in states like Texas, even though the Obama administration deported far more would-be immigrants than former president Trump.

This myth, like most right-wing fear-mongering, is not only typical but ties into another long-held myth – that people poison Halloween candy and give it out to kids.

Joel Best, the foremost expert on the topic of Halloween candy tampering mythology, has said that in his decades of research, only one person ever poisoned candy — in the 1974 case where a man killed his son to collect life insurance in Houston.

In a recent Atlantic magazine interview, he was asked about why people believe these myths despite the near-total lack of scientific evidence.

He also said that this is the first time he’s seen public figures like party officeholders and politicians getting involved in myth-making related to the Halloween holiday.

He cites an August press release by The Drug Enforcement Administration (DEA) as being the catalyst for the opioid drug being used as a political “boogeyman.” He said the memo intended to tip off law enforcement officials that the brightly colored pills might be used by criminals to target young adults, not elementary school children.

“It also seems to have become heavily politicized because this is a very tense election year with very intense partisan politics,” he said. “It also seems as if people are using fentanyl for political purposes,” he told NPR.

Best pointed out that the idea that drug dealers would give away their products to children who have no resources to become customers is patently nonsensical, and countless news outlets agree.

“If you think about it, that’s nuts, because what’s the business plan? Drug dealers aren’t going to give away their drugs…to elementary-school students. What are they gonna do, get their milk money?”

Best, who gets dozens of calls every fall regarding his research, said that this year is different — because of the fentanyl scare. “There is intensified interest in the topic. But I imagine that next year, rainbow fentanyl will be forgotten,” he added.

“Halloween is supposed to be scary. And most of us have stopped believing in ghosts and goblins. But we believe in criminals. And so we tell scary stories about criminals,” he continued.

In the only known case of Halloween candy poisoning, Ronald Clark O’Bryan deliberately murdered his 8-year-old son Timothy by putting cyanide-laced Pixy Stix into his trick-or-treat candy haul. He was executed by the State of Texas in Huntsville for his crime in 1984.