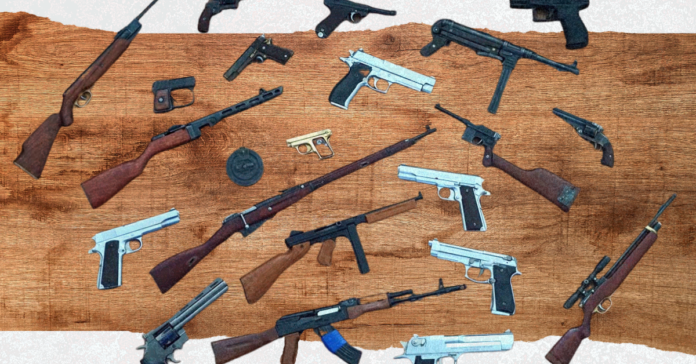 The typical image of violent, heavily armed Mexican drug cartels tends to leave out one very important fact: Texas is the source for many of those guns.

There is strict gun control in Mexico despite the fact that bearing arms is constitutionally protected. In fact, only a single store in the entire country of nearly 130 million people can legally sell firearms. That store is literally a fortress and is housed on a military base. Legally purchasing guns from there requires months of background checks and extensive documentation. On average, they sell about 35 guns each day.

Yet, gun violence is rampant in Mexico. Over 100,000 people have been killed by guns over the last decade.

The extremely lax gun buying policies of Texas are largely to blame. As Sam Garcia recently put it in The Guardian, “the same border that [Governor Greg] Abbott insists he wants to make safer is actually being destabilized by Texas’s lax gun laws, which the governor defends and which the Mexican cartels exploit to arm themselves – legally – to the teeth, according to officials left to grapple with the situation.”

“We are having a problem with high-caliber military weapons,” Mayor Peña Ortiz of Reynosa, a town 11 miles from the Texas border to The Guardian. “We know that most, if not all, of these high-caliber weapons are coming from the United States and a significant amount are likely coming from Texas. The financial incentive to smuggle weapons into Mexico is high and purchasing them in Texas and driving a few miles is too easy.”

The problem is similar to gun activists favorite scapegoat, Chicago, Illinois. The extremely high rate of gun violence in the city, which has stringent gun control, is often used as proof that gun control doesn’t work. However, the majority of gun recovered from crimes are bought in neighboring states with much more lax restrictions. In some cases, the gun laws in Chicago can be circumvented by an hour round-trip drive.

Governor Abbott and other top Texas Republicans often paint immigrants from the south as part of the Mexican crime syndicates and therefor dangerous to be in the state. The fact is that the guns which make them such a force of terror and murder in Mexico is driven primarily by the easy access to guns in Texas. The supply of cheap and easy to obtain firearms makes transporting them south a little problem.

Nonetheless, Texas Republicans seem able to denounce the gang violence of Mexico and uphold the gun laws that allow it to escalate without any loss of support from their base. No matter how many drug cartel soldiers Texas arms, it seems to remain Mexico’s problem and not Texas’.